Designed by Jensen Naval Architects and Marine Engineers, and built by the Great Lakes Shipyard of Cleveland, Ohio a 74-foot workboat is quickly making a name for itself; in and out of the water.

The “HandySize” Class Tug was designed to fill the niche between the 2,400 to 3,200 HP market for harbor workboats, fireboats, and construction operations and coastal towing, too. The Tug model 2800 is powered by two Cummins QSK38,1400HP diesel engines rated at 1800 rpm, providing a total of 2,800 HP – or in order words, just right for those niche tasks assigned to a Great Lakes workboat.

Built to American Bureau of Shipping (ABS) standards, the vessel’s 30 foot beam, and 11.5 foot draft combines with a robust speed of 12.0 knots and bollard pull of 45 metric tons to add to its popularity. Built to last and easy to operate, the ABS “ice class” tug hull incorporates more steel thickness and tighter framing in the bow and stern, ensuring increased normal statutory life. Designed specifically for a two-man operation, bridge control of engine room and deck winches is standard. The Cummins QSK38 engines provide increased fuel efficiency, and lower maintenance costs.
Because the “HandySize” Tugs are smaller in weight and size, no loadline certificate is needed, and only one licensed operator is required. The crew does not need to hold AB and OS ratings, or Merchant Marine Documents. This helps with future crew shortages along with increased wages, and benefit costs.

Environmentally Sound Engineering
This “green” class tug reduces air emissions, and other environmental toxins. One unique feature is that no ballast water, or sewage water is discharged from the tug. Its Cummins propulsion engines meet current U.S EPA Tier II and EU Stage IIIA emissions regulations. Other notable particulars are many:
Engines: The “ HandySize” Class Tug combines the newest technologies with the solid fundamentals of shipbuilding. The choice of the Cummins OSK38-M1400 marine diesel engine fits well as the centerpiece of its propulsion system. The 4 stroke continuous duty diesel with a displacement of 37.9L has an engine base made of components from other Cummins marine engines, including a new cast-iron, ductile single-piece piston with nitride-coated rings and hardened cylinder liner. The fuel system is complimented by a Modular Common Rail Fuel System (MCRS) featuring a simplified design which provides constant high injection pressure regardless of engine speed or load condition. The benefits to this design include low noise and vibration for quiet operation, idle stability and improved low-end torque. The dry weight of the engine is a maximum 12,015 lbs (5,450 kg).

Off-ship Fire-fighting (OPTION): A single monitor, with a nominal capacity of 2,000 gpm, fitted forward for fighting off-ship fires was furnished and installed by the Builder. Seawater for the monitor shall be supplied by a dedicated sea water pump driven by at PTO off one of the diesel generators.

Hawser Winch (OPTION): As an Option, Great Lakes Shipyard offers a Jon-Rie Intertech Series 230, powered using the same HPU as the aft towing winch. The winch has the capacity to spool 450’ of 7” synthetic hawser and will produce a line pull of 28,000 lbs, a line speed of approximately 50 FPM and a brake holding force of 430,000 lbs.

Crane (OPTION): As an Option, Great Lakes Shipyard offers an ESI Marine Crane Model T-045M/3S, powered using the same HPU as the aft towing winch.
In addition, the tug has a low profile pilothouse with 360 degree visibility which permits it to maneuver under the sheer of container ships, and in the bow and stern of areas of the vessel.

Great Lakes Group: Impact, Reach & Endurance, too.
The Great Lakes Group is a maritime story unto itself. The Company is more widely known just as “The Towing Company.” Founded by oil magnate John D. Rockefeller, the Company is now celebrating its 115th year in continuous business.

Not so widely known is that “The Towing Company” is a full-service marine transportation company – actually a “Group” of companies engaged in marine-related businesses operating on the East, Gulf, and West Coasts of the United States, as well as in Puerto Rico, in the islands of the Caribbean, and internationally. The Group of Companies also includes: Tugz International LLC, specializing in vessel design, building and chartering; Admiral Towing & Barge Company, primarily engaged in government operations; Soo Line Handling Services, Inc., providing line handling services at the US Army Corps of Engineers at the Soo Locks, Sault Ste. Marie, Michigan; Puerto Rico Towing & Barge Co., engaged in marine transportation services in San Juan, Puerto Rico and the islands of the Caribbean.

(As published in the November 2013 edition of Marine News - www.marinelink.com) 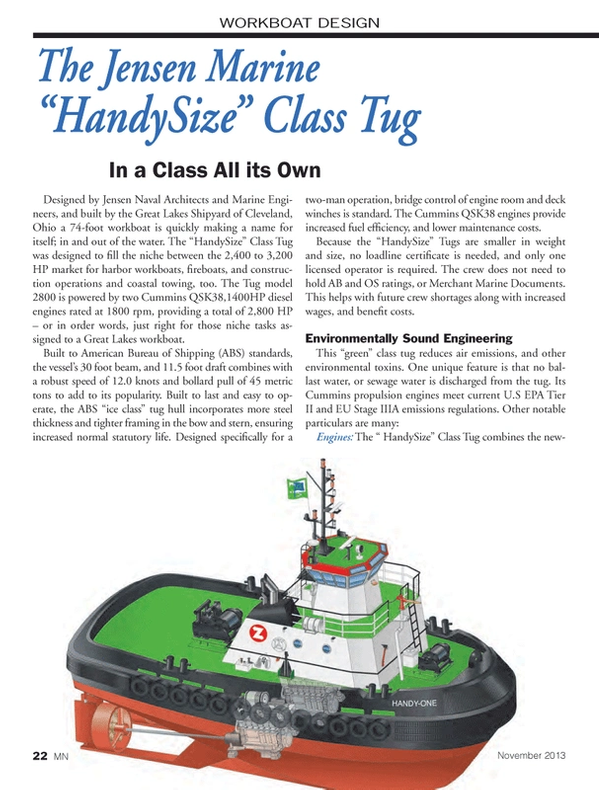