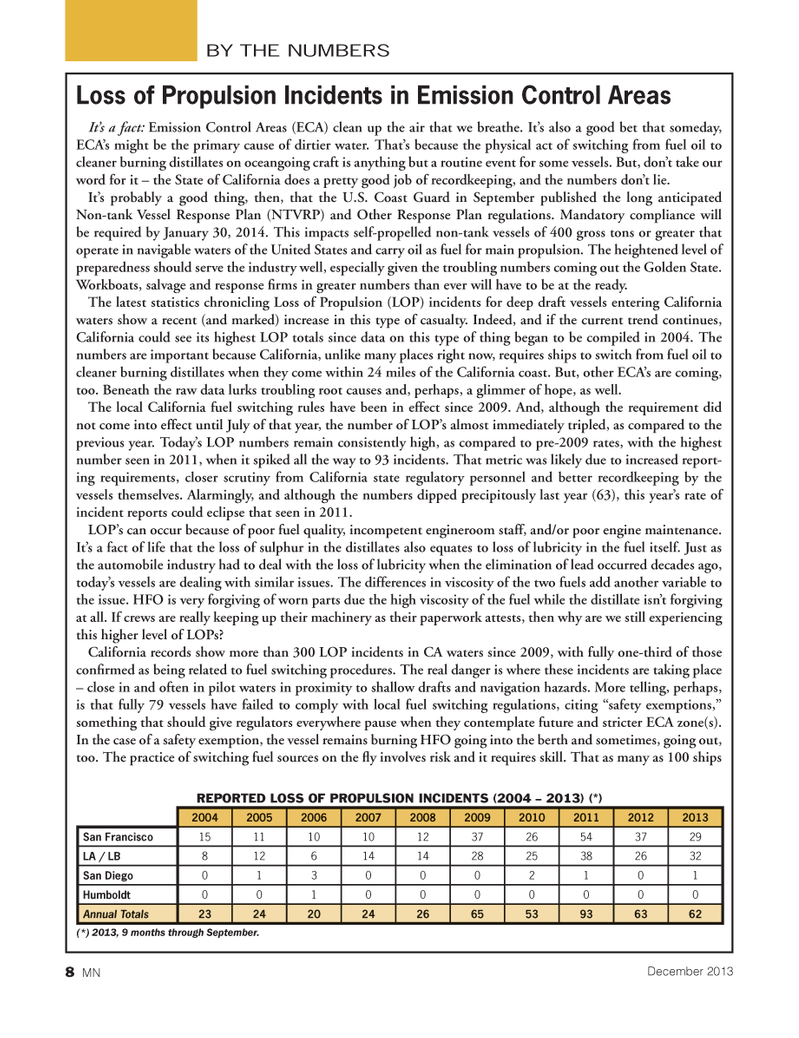 It?s a fact: Emission Control Areas (ECA) clean up the air that we breathe. It?s also a good bet that someday, ECA?s might be the primary cause of dirtier water. That?s because the physical act of switching from fuel oil to cleaner burning distillates on oceangoing craft is anything but a routine event for some vessels. But, don?t take our word for it ? the State of California does a pretty good job of recordkeeping, and the numbers don?t lie. It?s probably a good thing, then, that the U.S. Coast Guard in September published the long anticipated Non-tank Vessel Response Plan (NTVRP) and Other Response Plan regulations. Mandatory compliance will be required by January 30, 2014. This impacts self-propelled non-tank vessels of 400 gross tons or greater that operate in navigable waters of the United States and carry oil as fuel for main propulsion. The heightened level of preparedness should serve the industry well, especially given the troubling numbers coming out the Golden State. Workboats, salvage and response  rms in greater numbers than ever will have to be at the ready. The latest statistics chronicling Loss of Propulsion (LOP) incidents for deep draft vessels entering California waters show a recent (and marked) increase in this type of casualty. Indeed, and if the current trend continues, California could see its highest LOP totals since data on this type of thing began to be compiled in 2004. The numbers are important because California, unlike many places right now, requires ships to switch from fuel oil to cleaner burning distillates when they come within 24 miles of the California coast. But, other ECA?s are coming, too. Beneath the raw data lurks troubling root causes and, perhaps, a glimmer of hope, as well. The local California fuel switching rules have been in effect since 2009. And, although the requirement did not come into effect until July of that year, the number of LOP?s almost immediately tripled, as compared to the previous year. Today?s LOP numbers remain consistently high, as compared to pre-2009 rates, with the highest number seen in 2011, when it spiked all the way to 93 incidents. That metric was likely due to increased report- ing requirements, closer scrutiny from California state regulatory personnel and better recordkeeping by the vessels themselves. Alarmingly, and although the numbers dipped precipitously last year (63), this year?s rate of incident reports could eclipse that seen in 2011. LOP?s can occur because of poor fuel quality, incompetent engineroom staff, and/or poor engine maintenance. It?s a fact of life that the loss of sulphur in the distillates also equates to loss of lubricity in the fuel itself. Just as the automobile industry had to deal with the loss of lubricity when the elimination of lead occurred decades ago, today?s vessels are dealing with similar issues. The differences in viscosity of the two fuels add another variable to the issue. HFO is very forgiving of worn parts due the high viscosity of the fuel while the distillate isn?t forgiving at all. If crews are really keeping up their machinery as their paperwork attests, then why are we still experiencing this higher level of LOPs? California records show more than 300 LOP incidents in CA waters since 2009, with fully one-third of those con rmed as being related to fuel switching procedures. The real danger is where these incidents are taking place ? close in and often in pilot waters in proximity to shallow drafts and navigation hazards. More telling, perhaps, is that fully 79 vessels have failed to comply with local fuel switching regulations, citing ?safety exemptions,? something that should give regulators everywhere pause when they contemplate future and stricter ECA zone(s). In the case of a safety exemption, the vessel remains burning HFO going into the berth and sometimes, going out, too. The practice of switching fuel sources on the  y involves risk and it requires skill. That as many as 100 ships BY THE NUMBERSLoss of Propulsion Incidents in Emission Control Areas 2004200520062007200820092010201120122013 San Francisco15111010123726543729 LA / LB812614142825382632 San Diego0130002101Humboldt0010000000Annual Totals 23242024266553936362 REPORTED LOSS OF PROPULSION INCIDENTS (2004 ? 2013) (*) (*) 2013, 9 months through September. 8 MNDecember 2013MN Dec2013 Layout 1-17.indd 8MN Dec2013 Layout 1-17.indd 811/25/2013 12:38:55 PM11/25/2013 12:38:55 PM