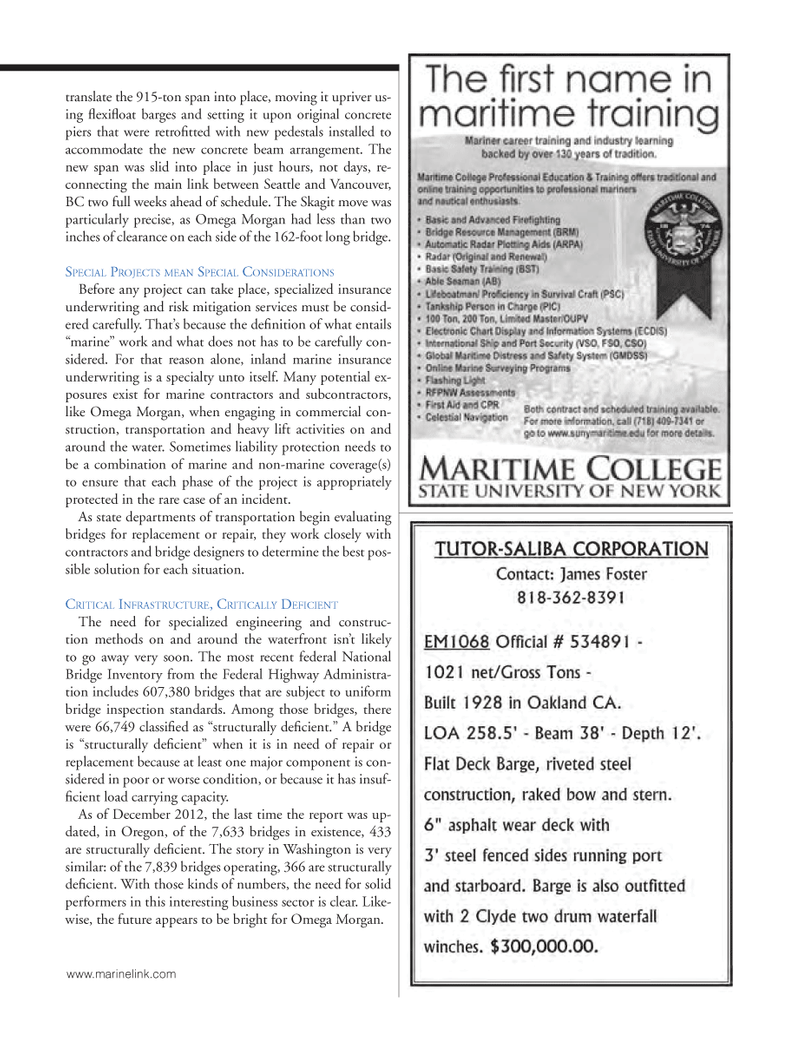 translate the 915-ton span into place, moving it upriver us- ing ß exiß oat barges and setting it upon original concrete piers that were retroÞ tted with new pedestals installed to accommodate the new concrete beam arrangement. The new span was slid into place in just hours, not days, re- connecting the main link between Seattle and Vancouver, BC two full weeks ahead of schedule. The Skagit move was particularly precise, as Omega Morgan had less than two inches of clearance on each side of the 162-foot long bridge.SPECIAL PROJECTS MEAN SPECIAL CONSIDERATIONS Before any project can take place, specialized insurance underwriting and risk mitigation services must be consid- ered carefully. ThatÕs because the deÞ nition of what entails ÒmarineÓ work and what does not has to be carefully con- sidered. For that reason alone, inland marine insurance underwriting is a specialty unto itself. Many potential ex- posures exist for marine contractors and subcontractors, like Omega Morgan, when engaging in commercial con- struction, transportation and heavy lift activities on and around the water. Sometimes liability protection needs to be a combination of marine and non-marine coverage(s) to ensure that each phase of the project is appropriately protected in the rare case of an incident. As state departments of transportation begin evaluating bridges for replacement or repair, they work closely with contractors and bridge designers to determine the best pos-sible solution for each situation.CRITICAL INFRASTRUCTURE , CRITICALLY DEFICIENTThe need for specialized engineering and construc- tion methods on and around the waterfront isnÕt likely to go away very soon. The most recent federal National Bridge Inventory from the Federal Highway Administra- tion includes 607,380 bridges that are subject to uniform bridge inspection standards. Among those bridges, there were 66,749 classiÞ ed as Òstructurally deÞ cient.Ó A bridge is Òstructurally deÞ cientÓ when it is in need of repair or replacement because at least one major component is con- sidered in poor or worse condition, or because it has insuf- Þ cient load carrying capacity. As of December 2012, the last time the report was up- dated, in Oregon, of the 7,633 bridges in existence, 433 are structurally deÞ cient. The story in Washington is very similar: of the 7,839 bridges operating, 366 are structurally deÞ cient. With those kinds of numbers, the need for solid performers in this interesting business sector is clear. Like- wise, the future appears to be bright for Omega Morgan. www.marinelink.com MN Dec2013 Layout 32-49.indd 47MN Dec2013 Layout 32-49.indd 4711/25/2013 12:52:49 PM11/25/2013 12:52:49 PM