Marine Noise Emissions: Is it Your Next Regulatory and Environmental Hurdle?

A different kind of emission in the compliance spotlight – above and below decks.

The International Maritime Organization (IMO) Sub-Committee on Ship Design and Equipment during its 2012, 56th session submitted a draft revised code on noise levels onboard ships. The code set out mandatory noise level limits for machinery spaces, control rooms, workshops, cargo blocks and accommodation spaces in an effort to address health and safety issues on board ships, ATB’s and/or tugboats. The benefits of the noise reduction included improved shipboard communications, an employer’s administration of an effective hearing conservation program, maintaining decibel levels below 85 dBA and identifying peak sources where extended periods of “noise” were evident.
It is difficult to argue with an attempt to provide regulations that protects the health of your crew or assist with better communications in the work place. The shipboard noise debate has also been taken further ashore when you can consider terminal operations and the noise generated during tanker and barge discharges in surrounding coastal towns and cities where refinery operations are prevalent on a daily basis. Many coastal municipalities are unhappy with the racket and as a result, some have even been successful in limiting tanker terminal operations to limited daylight periods.

Upping the Ante
The Marine Environmental Protection Committee at its sixty-sixth session in April of 2014 extended the range of the environmental envelope. The Sub-committee on Ship Design and Equipment provided code on the reduction of underwater noise from commercials shipping and issued Guidelines for the reduction of underwater noise from commercial shipping to address adverse impacts on marine life.
To be perfectly clear, marine life in the guideline definition is not your officers and crew or your neighbors near the refinery. The application of underwater acoustic ecology is based upon scientific research completed by NOAA in 2009 that identifies both short and long term negative consequences on marine life and especially marine mammals. Most of that research was collected along the coastlines of the United States in areas where commercial shipping, tug and barge traffic and offshore supply operations are growing. The rising background noise was noted to affect the communication process of many species of marine life and in certain marine areas, the ocean noise level has doubled each decade over the last sixty years.
According to the research findings, increased ship traffic generates an acoustic ‘fog’ that confuses marine mammals, separates them from their “pod” and as a result, these solitary swimmers are less able to locate mates’ further threatening survival of the species. And, say the experts, for many whales and dolphins, it is also difficult to acoustically locate their prey through the noise and more frequently, marine mammals collide with ships which they identify only too late as a danger.
There are also noise related economic considerations in commercial fishing. After exposure to heightened noise levels, the catch rates of many commercial fishing species, herring, cod, sea bass, sea bream or haddock decline by 40 to 80 percent. Ocean noise pollution can have a devastating effect on fish stocks, already depleted at an estimated 90 percent.

Addressing the Problem: Below Deck
We raise these new regulations as they relate to shipping’s latest improvements in energy efficiency and emissions reduction. Our industrial environmental sustainability can easily be advanced to address the issue of noise both above and below the keel. Designers, shipbuilders and operators should be encouraged to consider new technologies and applications that address these issues. The mitigation effort should consider operational applications beyond propeller cavitation and look to alternative operational modifications.
In several recent new construction projects completed by Amtech and employing new technology, noise levels on board the ship resulted in many conversations between the builder and crew. The trials and delivery of the American Phoenix, a 50,000 dwt U.S. flag product carrier, were deemed to be so quiet and calm that the crew continually looked through the port lights to see if the ship was actually at sea.
Amtech was next employed to develop a lithium battery hybrid propulsion research vessel. The propulsion system developed by Northern Lights, BAE Hybrid Systems and Corvus Energy was introduced due to a request to reduce emissions and fuel consumption along with providing a quieter platform for collecting data and teaching. Built at Robert E. Derecktor shipyard in Mamaroneck, New York, the Spirit of the Sound hybrid application is being used as a platform for offshore wind farm maintenance where emissions at the farms will be an issue during construction. The research vessel is used to collect water samples and track marine life in Long Island Sound and the actual “noise” benefit of the silent propulsion system was not realized until sea trials were conducted and schools of fish and other marine life surrounded the vessel during its movements in and out of the harbor, without machinery noise or wake.

On Deck
Noise reduction efforts have also continued in our Articulated Tug and Barge designs and construction. Working with Marflex of the Netherlands and their U.S. agent Southern Electric Pumping Systems, variable frequency drive deepwell pumps have been introduced to several chemical and tank barge designs providing an alternative to historic hydraulic based cargo systems. Marflex was first introduced to us during several product tanker construction projects in Korea where the builder understood the cost savings and efficiency of installing electrical cable versus hydraulic piping as the energy source. Marfex is now working with many U.S. shipyards and design houses to help achieve those production cost savings in U.S. construction.
The proposed IMO regulations and the capability to reduce deck chatter during cargo operations on the ATB applications are not new to Marflex. The issue was studied in Europe in October of 2013 when the Dutch company completed a survey of noise measurements on the MDPC-200 deepwell pumps while operating in Rotterdam to assess compliance with IMO guidelines. Working areas on board affecting the crew, areas located 275 meters from the vessel ashore and underwater survey points were all collected.
The variable frequency drives allow complete speed control of the deck mounted electric motor driven deepwell pump. Sound levels were recorded during idle speeds, full discharge and stripping exercises. At all RPM levels the survey concluded that the noise limits were easily met. The underwater noise levels measured from the terminal jetty to the port side of the tanker while one or more of the Marflex pumps were operating also produced interesting results. The port geometry, resonance between the quays and the slope of the bottom profile all affected the noise generated by the pumping system. We found the results interesting as most data concerning underwater noise pollution addresses only propeller cavitation and though we have addressed propeller design in recent builds, the fact that other operating system could add “noise” was not considered in the design effort.

Why all the chatter about ship noise?
On October 10, 2008, NMFS published a final rule (73 FR 60173) that established vessel speed restrictions to reduce the likelihood of deaths and serious injuries to endangered North Atlantic right whales from collisions with vessels. The regulation limited vessel speeds to 10 knots or less for vessels 65 ft (19.8 m) or greater in overall length in certain locations and at certain times of the year along the east coast of the U.S. Atlantic seaboard. The regulation contained a provision that allows for an exception to the speed restriction when navigational safety requires a deviation. This rule also contained a provision whereby the regulation would expire (or “sunset”) on December 9, 2013. The sunset provision was removed and the regulations remain in place. Nevertheless, though environmentally responsible, the speed reductions cause economic harm and in some cases dangers of navigation.
The industry’s continued attempt to increase efficiency, reduce emissions and remain environmentally sustainable has introduced new technologies. An effort to use these technologies to address collateral issues should continue to avoid regulation and address the problems as “guidelines.”  There are better ways to solve the problems beyond restrictions, limits and regulation. Let solid design and engineering be our path forward to environmental sustainability.

(As published in the November 2014 edition of Marine News - http://magazines.marinelink.com/Magazines/MaritimeNews) 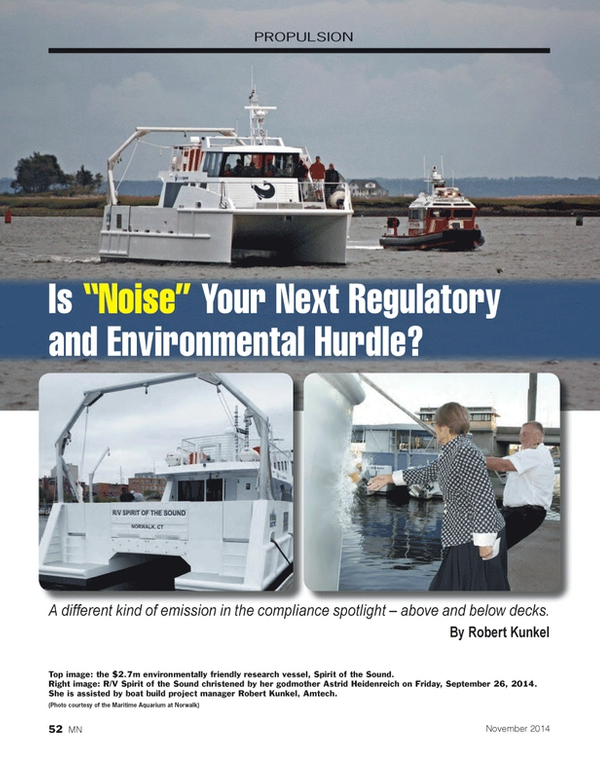 Read Marine Noise Emissions: Is it Your Next Regulatory and Environmental Hurdle? in Pdf, Flash or Html5 edition of November 2014 Marine News