The Louisiana Gulf is gearing up to export liquefied natural gas from Sabine Pass and Lake Charles in the state’s southwest and Plaquemines Parish in the southeast. Over the next five years, as LNG import terminals begin exporting and new terminals are built, more tugs and channel pilots will be needed, industry experts said last month. A convoy system will be employed to handle outgoing and incoming tankers. Safety rules for the region’s waterways are also almost certain to be revised.
The nation’s only LNG export terminal is run by ConocoPhillips in Kenai, Alaska. But that’s about to change. Cheniere’s Sabine Pass LNG facility in Cameron Parish should be Louisiana’s first exporter, starting in late 2015. Natural gas from fracking Haynesville shale in northwest Louisiana, the state’s pipeline network and existing LNG import terminals, along with currently weak gas prices, have spurred firms to consider exports.
Just what makes LNG suitable for export? When natural gas is chilled to minus 259 degrees Fahrenheit, or minus162 Centigrade, it becomes a liquid that’s more efficient to store and ship. Liquefied natural gas is about 1/600th the volume of natural gas. Buyers in Japan (moving away from nuclear power), China (slowly weaning from heavy use of coal), other Asian nations, Europe and Latin America are thirsty for it. The ongoing dispute between Russia, Ukraine and the EU also hold out possibilities for more outlets for U.S. LNG exports.

Calcasieu Shipping Channel Revs Up For More Vessels
“Calcasieu River channel traffic – including LNG tankers, oil tankers and tugs – is expected to double by the year 2025,” Stephen Broussard, Director of West Cameron Port, said last month. The channel runs from mile-marker zero at the Calcasieu jetties up 52 miles to Lake Charles, La. Broussard added, “The Federal Energy Regulatory Commission is approving LNG projects in a process that takes more than a year. At least seven LNG export projects, either in the Calcasieu channel or utilizing it, are in various stages of planning. They are SCT&E LNG; Waller Point LNG; Venture Global, LLC--with the latter to be called Calcasieu LNG; Trunkline LNG; Magnolia LNG; Cameron LNG and Gasfin Development.”
“In addition, Sasol is expanding and building a huge plant in Westlake that will use natural gas to make ethylene and other products that will require tankers.” And, he said, “G2X Energy plans to build a natural gas-to-gasoline facility at Port of Lake Charles that will need vessels.” Sasol is based in South Africa while G2X Energy, Inc. is headquartered in Houston.
The LNG boom that most think will come will also have other local impact. “The number of Calcasieu River pilots will probably double from 17 now by 2025,” Broussard said. So, too, will the need for additional workboats in the form of high powered tugboats. “LNG carriers each have at least two dedicated tugs now. We’re looking at nearly two dozen tugs in the channel by 2025.” But he said it’s hard to get a good grip on tug numbers. “Some of them are here all the time, while other tugs come and stay awhile but it’s not their home base,” Broussard said. Cargo at West Cameron Port, located in Cameron, La., includes crude oil, baroid, coal and grain.

Safety Precautions Will Increase As Vessel Traffic Grows
Local officials are already hard at work to determine changes that LNG will bring to the local traffic schemes. For example, Ausenco Consulting was hired by the Port of Lake Charles to study how LNG exports will impact Calcasieu channel traffic. Broussard explained, “Ausenco is in the middle of doing that study now and could be finished by year-end. Of course, the Coast Guard will have final say on traffic safety, and it may issue additional rules for the channel at some point. A recent Coast Guard ruling addresses the number of pilots on certain-sized ships in the Calcasieu River.” Ausenco, based in Australia and Canada, has a Houston office.
The U.S. Coast Guard is working with federal, state and local partners to keep the Calcasieu shipping channel safe and secure, Lieutenant Will Fediw, the Guard’s Marine Safety Unit chief in Lake Charles, said last month. “The Coast Guard, in partnership with channel users, reviews best practices, mitigating measures and regulations as to their effectiveness,” he said. “In anticipation of future growth, we’re looking ahead to the impacts of additional vessel traffic. But at this time there have been no discussions about increasing existing regulations.”

Lake Charles Pilots Invest in New Dispatch System
Captain Brett Palmer, president of the Lake Charles Pilots Association, said with at least $70 billion in new LNG and petrochemical projects and expansions planned from the mouth of the Calcasieu up to Lake Charles, vessel traffic will swell. “We’ll have a lot more tankers on the Calcasieu channel, and are contemplating using a convoy system to pilot them through the waterway,” he said last month. “Some of the additional tankers will be very large.” In line with Broussard, Palmer said the Lake Charles group’s 17 pilots are expected to double within the next ten years.
“There are 11 tugs in the harbor today, and that will double if all the anticipated construction here occurs,” Palmer said. “More line handlers, local and out-of-town agents, and an abundance of infrastructure will be required. Our pilots’ group is working closely with existing and new stakeholders to assess these demands. We aim to protect all stakeholders.” To meet potential growth, the Lake Charles Pilots Association has spent $58,000 since last year on a new dispatching system.
“Meanwhile, the Coast Guard is looking at safety zones, vessel traffic management, boarding rules for pilots, and the timing and sequence of vessels,” Palmer said. New approaches to managing traffic will be needed. “The only way to accommodate growth and meet USCG safety zone requirements is to convoy ships inbound, and then start a convoy outbound after the LNG ships have cleared,” he said. For existing channel users, Palmer’s remarks are sure to have real consequences. Blue water and brown water traffic will surely be impacted whenever LNG vessels are in port. And, while the proliferation of LNG terminals means more workboats, it will also mean traffic congestion for existing users. That said; local stakeholders are working hard to minimize that reality.
The Calcasieu channel’s LNG imports were a record in 2007, and then declined as the nation’s natural gas production rose, Palmer said. Once a big LNG importer, the channel will soon be a major exporter. He explained the current piloting system. “Incoming LNG tankers are guided by one pilot now, or two pilots for the biggest tankers. Our association has three boats. One pulls alongside a tanker 30 miles out in the Gulf and guides it up the Calcasieu channel to Lake Charles.”
If seas are choppy, a pilot might board a tanker by helicopter. “The crude tankers that we board offshore accept private helicopters,” Palmer said. “But LNG ships will not. We need additional, appropriate pilot boats for this LNG export expansion.” To that end, Palmer added, Gladding-Hearn Shipbuilding in Massachusetts – which just delivered a state-of-the-art multi-missioned pilot boat for the Charleston, SC pilots – is also working on a design for a new pilot vessel.
Meanwhile, “a big current and future challenge is whether Congress can provide the U.S. Army Corps of Engineers with enough funding to keep the Calcasieu shipping channel dredged to a 40-foot depth for tankers,” Palmer said. The channel is 400 feet wide. But, Lake Charles will have to get in line with other deep draft ports, some clamoring for dredging funds in order to accommodate the new post-Panamax containerships. It’s all but certain that there won’t be enough to go around.

Sabine Pass Exports Should Start Late Next Year
The Sabine Pass LNG terminal, operated by Houston-based Cheniere Energy, Inc., is located in Cameron Parish, La. along the river on the Texas border. The facility is preparing to export LNG next year. The terminal, which started up in April 2008, became the world’s largest LNG receiver in terms of regasification capacity. Located at the channel’s widest point, it is 3.7 nautical miles from open water and 23 nautical miles from the outer buoy. Tugs are stationed at the terminal to berth LNG vessels. The navigation channel is maintained at a 40-foot depth. The FERC on April 16, 2012 authorized Sabine Pass LNG to receive, process and export U.S.-produced natural gas as part of its liquefaction project.
“The Sabine Pass liquefaction facility will be the first LNG export operation to be built in North America in over 40 years,” Katie Pipkin, Cheniere Energy’s Senior Vice President of Business Development, said last month. “Construction is well under way on the first four liquefaction trains, and we expect the first LNG production by late 2015.” LNG plants consist of one or more trains, each of which is an independent liquefaction unit. Trains can be added to an existing LNG plant.
“The facility is underpinned by long-term contracts that commence with the start of a designated train,” Pipkin said. Under an agreement to buy products, “BG Gulf Coast LNG’s contract commences with Train l,” she said. BG Gulf Coast is a subsidiary of U.K.-based BG Group.
When completed, Cheniere’s planned six-train liquefaction facility will export about 27 mtpas or million tons per annum of LNG. An expansion with trains 5 and 6 awaits final permitting, and a final investment decision (FID) is expected next year. All six trains should be operational by 2019. For its part, BG Group expects global demand for natural gas to grow at an average 2.4 percent yearly between now and 2025, led by China and other Asian nations and boosted by urbanization and a shift away from coal. The European Union, meanwhile, wants to reduce its reliance on Russia’s natural gas and is looking to other suppliers.

Southwest Louisiana: Can it Handle More Vessel Traffic?
According to the Lake Charles pilots, the Calcasieu channel is underutilized. And, says Captain Palmer, with the right planning, the channel can handle the expected doubling in traffic. “Lake Charles pilots and the port as a whole are working closely with all stakeholders,” he said. “We’re aware of the challenges presented by this unprecedented expansion, and we’re confident about providing a safe, efficient and prosperous port for all.”
An additional 25,000 workers are expected in the area, mostly to build the new LNG and petrochemical facilities, Palmer said. “They’ll have to be housed, and lodges are being constructed for them now,” he said. In the petro-expansion, Lake Charles could go from being the nation’s twelfth most-active port to fifth busiest by 2025, he said. Meanwhile, the U.S. Department of Energy has warned that an outflow of LNG will raise natural gas prices to American consumers. The Sierra Club and other environmental groups say an industrial conglomeration in the bayous threatens Louisiana’s already shrinking coastline.
It seems almost certain that LNG traffic will rise on the Gulf Coast, and very soon. How much depends on who you talk to. On the other hand, workboats are the one variable that is guaranteed to increase along with any development. Erring on the side of caution – both in the number of pilots being used to move LNG traffic and the number of tugs required to provide the necessary margin of safety – local officials and the general public itself, will demand it. That’s good news for brown water operators, shipyards and domestic mariners alike.

(As published in the November 2014 edition of Marine News - http://magazines.marinelink.com/Magazines/MaritimeNews) 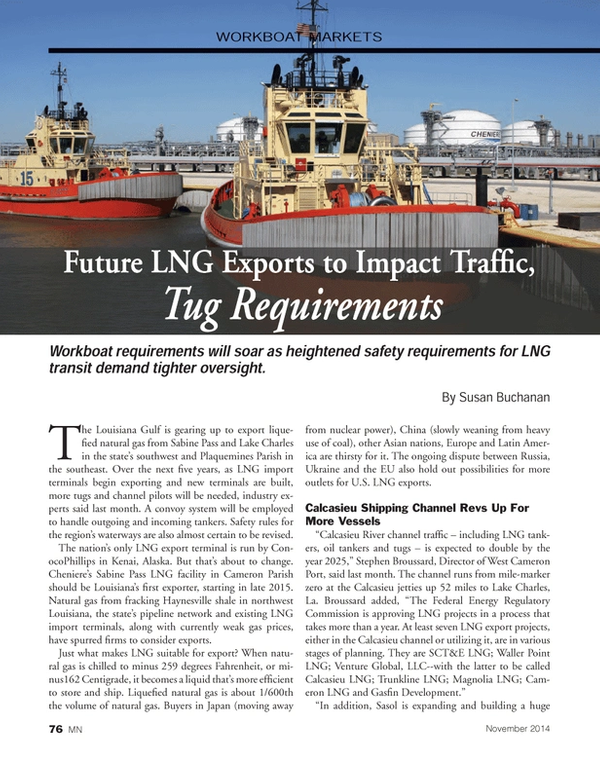