What does the future hold for infrastructure investment on the Atlantic Intracoastal Waterway in 2018?

The Atlantic Intracoastal Waterway Association (AIWA) is a nonprofit, membership organization for one of the nation’s longest water infrastructure projects stretching over 1,100 miles: the Atlantic Intracoastal Waterway (AIWW). We are grateful to serve as the one unified Voice of the Waterway and below is our outlook for 2018.
In the President’s Budget for 2017, the AIWW began the appropriations process with only $6.911 million for the entire waterway. This amount was $7.02 million less than the final amount appropriated for the waterway in 2016. In response to the President’s FY17 budget, the AIWA requested that Congress increase funding for the U.S. Army Corps of Engineers (USACE) to perform Operations & Maintenance (O&M) of Inland Waterways and Small, Remote and Subsistence Navigation, both of which could be used to fund maintenance dredging projects in the AIWW. We are pleased to report that Congress increased the amount of federal funding available to these two categories of projects by $46.5 million and $49 million, respectively. The allocation of these additional dollars was determined by USACE through development of their annual work plan.
In the USACE final work plan, the AIWW received a substantial increase in the amount of funding available for waterway maintenance as the original amount from the President’s budget more than doubled from $6.911 million to over $15.6 million. In addition, the AIWW was eligible for an additional $32+ million for recovery efforts linked to hurricane impacts in 2016. All these funds are being used to conduct maintenance dredging projects in EVERY state along our marine highway.
Additionally, we worked with our partners at the U.S. Army Corps of Engineers to secure an updated assessment of O&M needs for the AIWW. This planning tool helps us determine the funding baseline for the AIWW and we request updated information on the following categories on an annual basis:
Based on current information for 2017, the estimated cost to return the AIWW to its authorized dimensions because of backlog maintenance needs would be about $106 million. Once the waterway is returned to its authorized dimensions, it was estimated to cost approximately $50.5 million in annual maintenance dredging. These estimates do not discriminate between federal and nonfederal monies, but are an estimate of overall need for the entire 1,100 miles. We believe that the most critical shoaling areas can be addressed with a concerted federal and nonfederal funding effort, and the backlog amount reduced to a number more in line with the annual maintenance needs.
Moving forward into 2018, we have increased opportunities to raise awareness and secure additional funding for the waterway. The AIWW is already included in the President’s 2018 budget for over $14.4 million, which is an increase of more than 100 percent from the President’s budget in 2017. This is more than has been budgeted for the waterway in more than ten years. To date, the final 2018 dollars have yet to be appropriated as Congress continues to pass Continuing Resolutions (CR) with the current CR expiring in January.
Once the final appropriation bills are passed, the AIWA will focus on supporting the expenditure of all appropriated monies for waterway maintenance. We must not be satisfied with only securing funding for the waterway, but must also support project execution through being an active stakeholder.
In our stakeholder role, we have been actively supporting USACE in trying innovative approaches to waterway maintenance. One such effort underway is a beneficial use dredging project near Jekyll Island, Georgia where a portion of the material removed from the waterway will be placed in an upland marsh site on Jekyll Island. This is an exciting opportunity as we have limited confined disposal areas in Georgia, and other states along the waterway. We are also continuing to partner with other water infrastructure organizations to ensure that the AIWW is considered as a viable piece of an interconnected marine transportation system. We look forward to continuing those efforts this year. We stand ready to participate in any additional challenges and opportunities that arise for the AIWW in 2018.
Editor’s Note: As noted above, AIWA stretches some 1,100 miles up and down the U.S. East Coast, much of it paralleling in close proximity to the north-south, heavily congested Interstate 95 highway. The potential for a properly dredged and maintained AIWA to create a viable and robust marine highway – an excellent alternative to I-95 for many intermodal freight options – is virtually unlimited. We can only hope that Mr. Pickel and his colleagues find success in this worthy endeavor.
The Author
Brad Pickel is the Executive Director of the Atlantic Intracoastal Waterway Association. In addition to the AIWA, Brad has experience in water resources management and advocacy from previous employment with a Washington, D.C.-based lobbying firm, and overseeing coastal management issues for a Florida community for over 15 years. Brad is also a board member and Executive Committee member for the National Waterways Conference, Inc.
(As published in the February 2018 edition of Marine News) 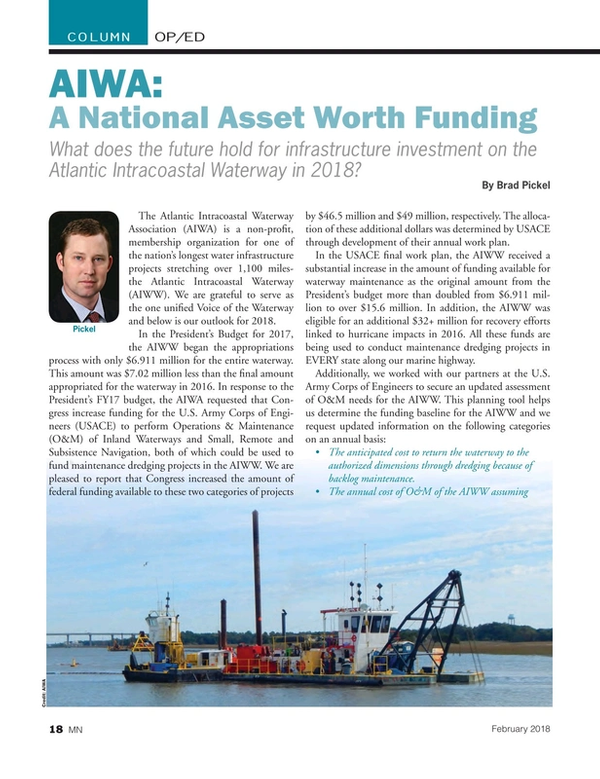 Other stories from February 2018 issue