When it comes to Water Treatment, Experience Counts

Scienco/FAST, a St. Louis, Missouri-based manufacturer has, over many years, had plenty of experience in dealing with archived orders. In fact, the firm just had a call from a client that needed to replace a part on a previously installed Scienco/FAST system. So what? Well, it turns out that the system was installed onto a domestic tugboat, way back in 1975. That more-than-43-year-old workhorse is still in service. And, so too is the Scienco/FAST system that’s been on board since it was launched.

Many Markets make better MSD’s
The firm’s marine offerings emanate from its (perhaps) better known land-based division and parent company, Kansas-based BioMicrobics. In that space, the firm boasts over 65,000 installs worldwide using the FAST system in various applications from homes to small municipalities and public/private commercial properties. More than 40 years of research, development and real world operating history for water, wastewater, greywater, and stormwater treatment get packed into every MSD that takes last line on a commercial mission.

Scienco/FAST has customers that have purchased the sturdy Marine/FAST systems for use mainly in their workboats and tugs, but have several on Carriers, Tankers, Barges, and other types of vessels and offshore platforms. Too voluminous to list in this article, the Scienco/FAST client and install list since 1975 spans 36 pages, thousands of systems, and reads like “who’s who” of domestic inland operators, with dozens of repeat clients. In fact, the list of installs, which Scienco/FAST updates daily, includes some of the biggest names in the marine business, such as ARTCO, ACBL, Ingram Barge, Military Sealift Command, US Corps of Engineers, USCG, US Navy including two Aircraft Carriers, the Canadian Royal Navy and Coast Guard, American Steamship to name just a few.

Robert Rebori, Scienco/FAST President, explains it best, saying, “It all started in 1969, when St. Louis Ship Building Co. occupied the same ground on which James Eads built ironclads for the Union Navy during the American Civil War. At the time, they were their own guinea pigs, installing and monitoring equipment on their own towboats. While also equipping other towboat customers to provide repair work, this gradually expanded the St. Louis Ship additional services and capabilities into other classes of vessels and offshore structures. There came the day when a customer needed a wastewater treatment system that could withstand the jostling out on the water, but also treat the sewage where it could be reused or discharged into the receiving waters. The prototype Marine/FAST sewage treatment system was installed aboard the towboat M/V Missouri while the vessel was underway. It was an immediate success.” And, the rest is history.

Later still, in 1978, Canada issued their Pollution Prevention Regulations for the Canadian waters of the Great Lakes. At that time, it was the strictest marine standard in the world. A production FAST Model 40D with UV disinfection passed all tests with results that exceeded expectations from laboratory personnel. Additional tests were run for the U.S. Coast Guard with chlorine disinfection and the results were similarly outstanding.
Standing up to the test of time, in 2011, one of the first Marine/FAST units ever sold was finally retired after 38 years of continuous commercial marine service. The operator replaced it with another Marine/FAST unit. That said; it is not unusual to see a vessel to scrap, and before that happens, for the operator to remove the Marine/FAST units and transfer them to newly purchased vessels. Although FAST process technology is state of the art, the components are simple and economical. The internals of any existing Marine/FAST unit can be brought up to the latest configuration and upgraded as required to meet the newest regulations.

Then and Now:
Scienco/FAST provides long term technical support from its St. Louis offices to customers at no charge and has done so for many years. When on-site service is required, it is available worldwide. At a time when many of the firms that obtained marine sewage treatment certifications in the 1970’s are no longer active or even in business, Scienco/FAST remains as an industry constant.

And, when it comes to marine sanitation and sewage treatment, the only constant seems to be change. In fact, the future of marine sanitation is already here, since the Great Lakes now treats gray water as sewage. Not to worry: the professionals at Scienco/FAST are, as always, looking to the future, leveraging their robust past. That’s one constant that won’t ever change. www.sciencoFAST.com

This article first appeared in the February print edition of MarineNews magazine. 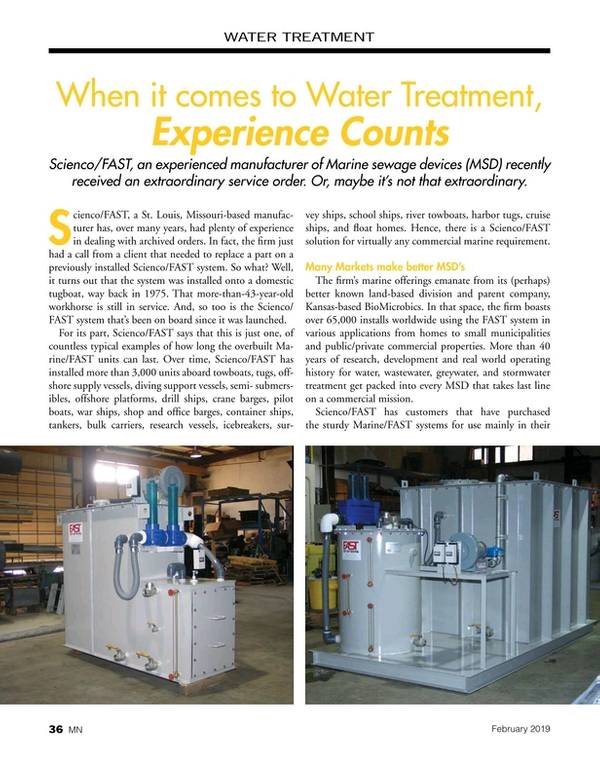 Read When it comes to Water Treatment, Experience Counts in Pdf, Flash or Html5 edition of February 2019 Marine News