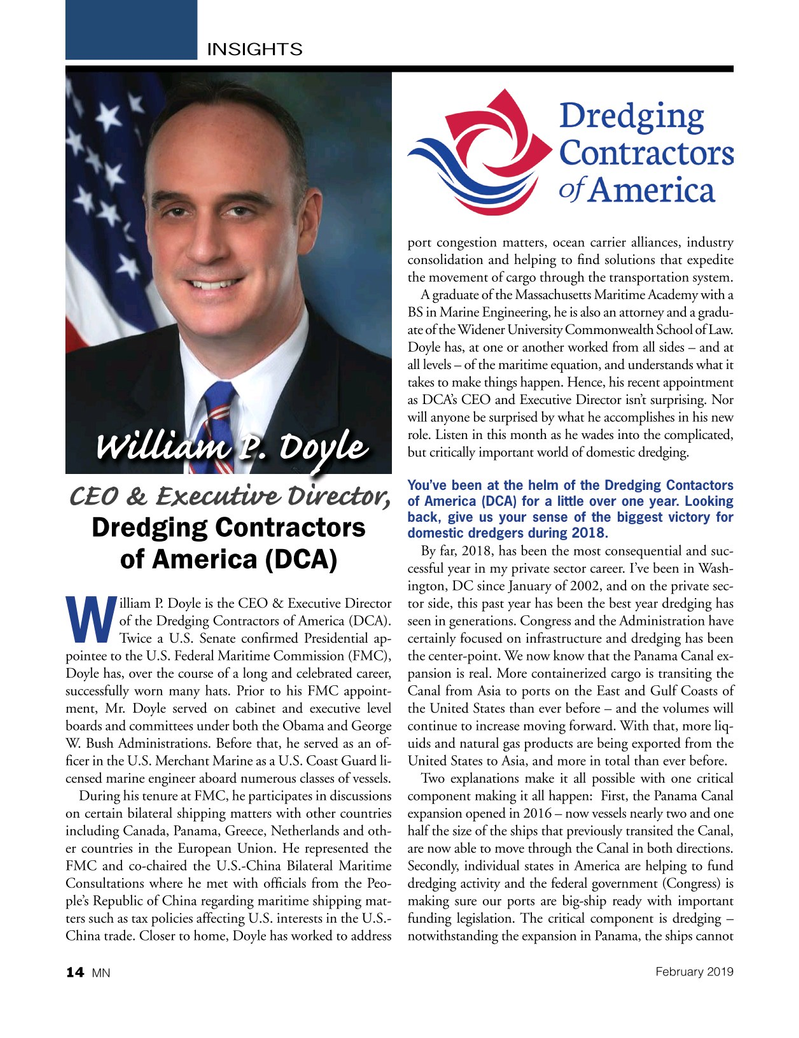 A graduate of the Massachusetts Maritime Academy with a

BS in Marine Engineering, he is also an attorney and a gradu- ate of the Widener University Commonwealth School of Law.

Doyle has, at one or another worked from all sides – and at all levels – of the maritime equation, and understands what it takes to make things happen. Hence, his recent appointment as DCA’s CEO and Executive Director isn’t surprising. Nor will anyone be surprised by what he accomplishes in his new role. Listen in this month as he wades into the complicated, but critically important world of domestic dredging.

You’ve been at the helm of the Dredging Contactors

CEO & Executive Director, of America (DCA) for a little over one year. Looking back, give us your sense of the biggest victory for

By far, 2018, has been the most consequential and suc- of America (DCA) cessful year in my private sector career. I’ve been in Wash- ington, DC since January of 2002, and on the private sec- illiam P. Doyle is the CEO & Executive Director tor side, this past year has been the best year dredging has of the Dredging Contractors of America (DCA). seen in generations. Congress and the Administration have

W Twice a U.S. Senate confrmed Presidential ap- certainly focused on infrastructure and dredging has been pointee to the U.S. Federal Maritime Commission (FMC), the center-point. We now know that the Panama Canal ex-

Doyle has, over the course of a long and celebrated career, pansion is real. More containerized cargo is transiting the successfully worn many hats. Prior to his FMC appoint- Canal from Asia to ports on the East and Gulf Coasts of ment, Mr. Doyle served on cabinet and executive level the United States than ever before – and the volumes will boards and committees under both the Obama and George continue to increase moving forward. With that, more liq-

W. Bush Administrations. Before that, he served as an of- uids and natural gas products are being exported from the fcer in the U.S. Merchant Marine as a U.S. Coast Guard li- United States to Asia, and more in total than ever before.

censed marine engineer aboard numerous classes of vessels. Two explanations make it all possible with one critical

During his tenure at FMC, he participates in discussions component making it all happen: First, the Panama Canal on certain bilateral shipping matters with other countries expansion opened in 2016 – now vessels nearly two and one including Canada, Panama, Greece, Netherlands and oth- half the size of the ships that previously transited the Canal, er countries in the European Union. He represented the are now able to move through the Canal in both directions.

FMC and co-chaired the U.S.-China Bilateral Maritime Secondly, individual states in America are helping to fund

Consultations where he met with offcials from the Peo- dredging activity and the federal government (Congress) is ple’s Republic of China regarding maritime shipping mat- making sure our ports are big-ship ready with important ters such as tax policies affecting U.S. interests in the U.S.- funding legislation. The critical component is dredging –

China trade. Closer to home, Doyle has worked to address notwithstanding the expansion in Panama, the ships cannot