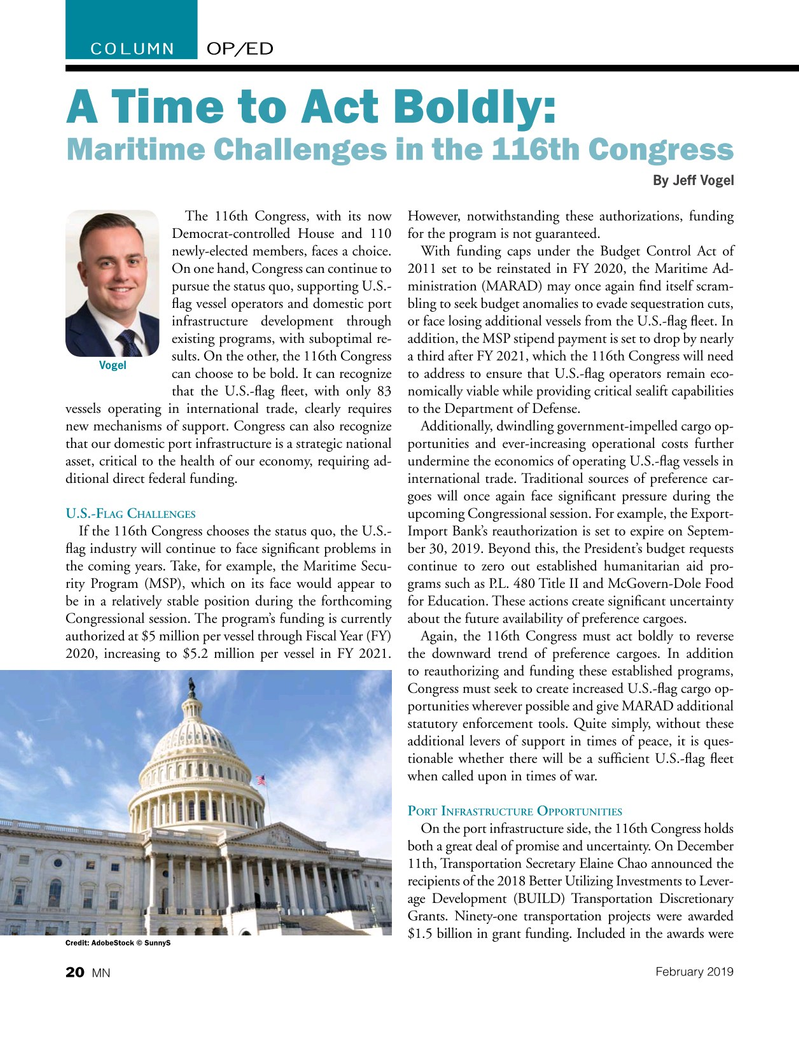 A Time to Act Boldly:

Maritime Challenges in the 116th Congress

The 116th Congress, with its now However, notwithstanding these authorizations, funding

Democrat-controlled House and 110 for the program is not guaranteed.

newly-elected members, faces a choice. With funding caps under the Budget Control Act of

On one hand, Congress can continue to 2011 set to be reinstated in FY 2020, the Maritime Ad- pursue the status quo, supporting U.S.- ministration (MARAD) may once again fnd itself scram- fag vessel operators and domestic port bling to seek budget anomalies to evade sequestration cuts, infrastructure development through or face losing additional vessels from the U.S.-fag feet. In existing programs, with suboptimal re- addition, the MSP stipend payment is set to drop by nearly sults. On the other, the 116th Congress a third after FY 2021, which the 116th Congress will need

Vogel can choose to be bold. It can recognize to address to ensure that U.S.-fag operators remain eco- that the U.S.-fag feet, with only 83 nomically viable while providing critical sealift capabilities vessels operating in international trade, clearly requires to the Department of Defense.

If the 116th Congress chooses the status quo, the U.S.- Import Bank’s reauthorization is set to expire on Septem- fag industry will continue to face signifcant problems in ber 30, 2019. Beyond this, the President’s budget requests the coming years. Take, for example, the Maritime Secu- continue to zero out established humanitarian aid pro- rity Program (MSP), which on its face would appear to grams such as P.L. 480 Title II and McGovern-Dole Food be in a relatively stable position during the forthcoming for Education. These actions create signifcant uncertainty

Congressional session. The program’s funding is currently about the future availability of preference cargoes.

authorized at $5 million per vessel through Fiscal Year (FY) Again, the 116th Congress must act boldly to reverse 2020, increasing to $5.2 million per vessel in FY 2021. the downward trend of preference cargoes. In addition to reauthorizing and funding these established programs,

Congress must seek to create increased U.S.-fag cargo op- portunities wherever possible and give MARAD additional statutory enforcement tools. Quite simply, without these additional levers of support in times of peace, it is ques- tionable whether there will be a suffcient U.S.-fag feet when called upon in times of war.

On the port infrastructure side, the 116th Congress holds both a great deal of promise and uncertainty. On December 11th, Transportation Secretary Elaine Chao announced the recipients of the 2018 Better Utilizing Investments to Lever- age Development (BUILD) Transportation Discretionary

Grants. Ninety-one transportation projects were awarded $1.5 billion in grant funding. Included in the awards were