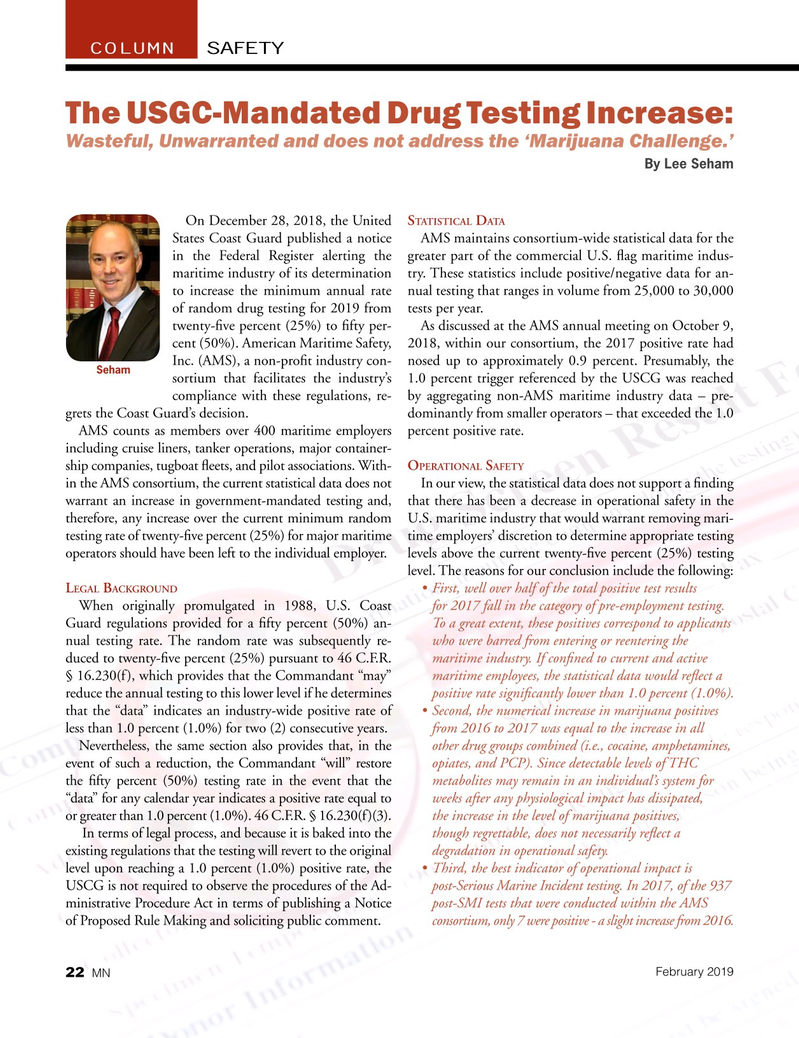 Wasteful, Unwarranted and does not address the ‘Marijuana Challenge.’

States Coast Guard published a notice AMS maintains consortium-wide statistical data for the in the Federal Register alerting the greater part of the commercial U.S. fag maritime indus- maritime industry of its determination try. These statistics include positive/negative data for an- to increase the minimum annual rate nual testing that ranges in volume from 25,000 to 30,000 of random drug testing for 2019 from tests per year.

twenty-fve percent (25%) to ffty per- As discussed at the AMS annual meeting on October 9, cent (50%). American Maritime Safety, 2018, within our consortium, the 2017 positive rate had

Inc. (AMS), a non-proft industry con- nosed up to approximately 0.9 percent. Presumably, the

Seham sortium that facilitates the industry’s 1.0 percent trigger referenced by the USCG was reached compliance with these regulations, re- by aggregating non-AMS maritime industry data – pre- grets the Coast Guard’s decision. dominantly from smaller operators – that exceeded the 1.0

including cruise liners, tanker operations, major container- ship companies, tugboat feets, and pilot associations. With- o SPeratIonal aFety in the AMS consortium, the current statistical data does not In our view, the statistical data does not support a fnding warrant an increase in government-mandated testing and, that there has been a decrease in operational safety in the therefore, any increase over the current minimum random U.S. maritime industry that would warrant removing mari- testing rate of twenty-fve percent (25%) for major maritime time employers’ discretion to determine appropriate testing operators should have been left to the individual employer. levels above the current twenty-fve percent (25%) testing level. The reasons for our conclusion include the following: l B • First, well over half of the total positive test results egal aCkgroUnd

When originally promulgated in 1988, U.S. Coast for 2017 fall in the category of pre-employment testing.

Guard regulations provided for a ffty percent (50%) an- To a great extent, these positives correspond to applicants nual testing rate. The random rate was subsequently re- who were barred from entering or reentering the duced to twenty-fve percent (25%) pursuant to 46 C.F.R. maritime industry. If confned to current and active § 16.230(f), which provides that the Commandant “may” maritime employees, the statistical data would refect a reduce the annual testing to this lower level if he determines positive rate signifcantly lower than 1.0 percent (1.0%).

that the “data” indicates an industry-wide positive rate of • Second, the numerical increase in marijuana positives less than 1.0 percent (1.0%) for two (2) consecutive years. from 2016 to 2017 was equal to the increase in all

Nevertheless, the same section also provides that, in the other drug groups combined (i.e., cocaine, amphetamines, event of such a reduction, the Commandant “will” restore opiates, and PCP). Since detectable levels of THC the ffty percent (50%) testing rate in the event that the metabolites may remain in an individual’s system for “data” for any calendar year indicates a positive rate equal to weeks after any physiological impact has dissipated, or greater than 1.0 percent (1.0%). 46 C.F.R. § 16.230(f)(3). the increase in the level of marijuana positives, In terms of legal process, and because it is baked into the though regrettable, does not necessarily refect a existing regulations that the testing will revert to the original degradation in operational safety.

level upon reaching a 1.0 percent (1.0%) positive rate, the • Third, the best indicator of operational impact is

USCG is not required to observe the procedures of the Ad- post-Serious Marine Incident testing. In 2017, of the 937 ministrative Procedure Act in terms of publishing a Notice post-SMI tests that were conducted within the AMS of Proposed Rule Making and soliciting public comment. consortium, only 7 were positive - a slight increase from 2016.