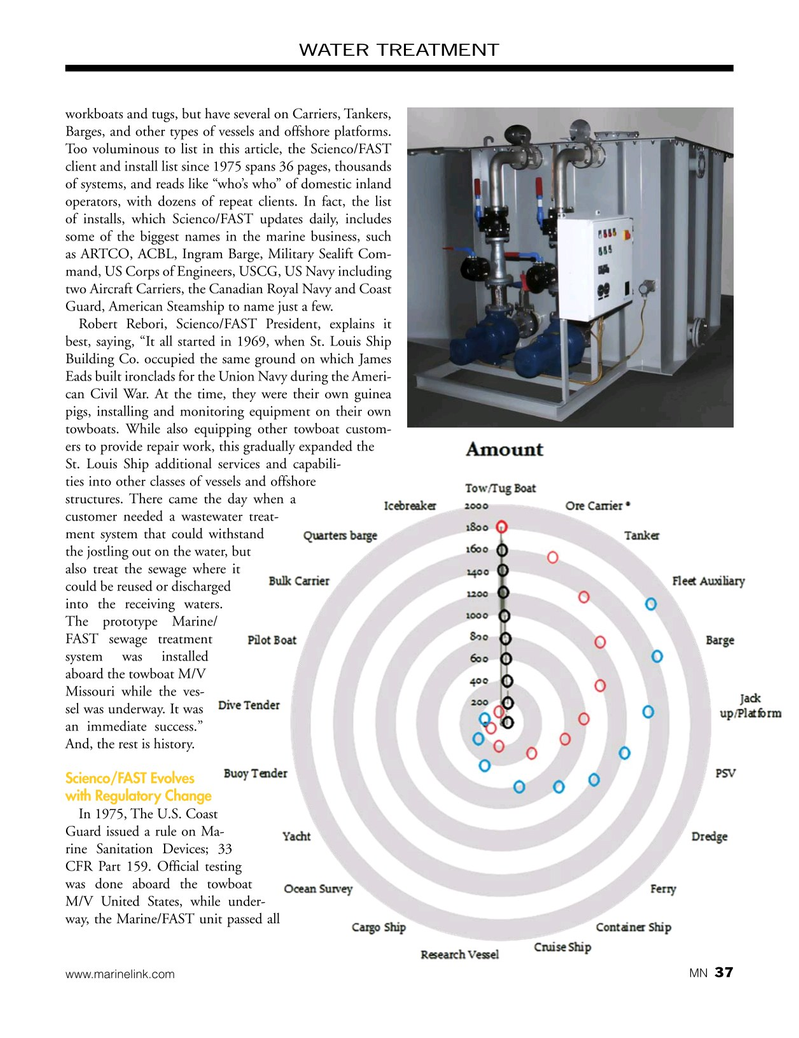 WATER TREATMENT workboats and tugs, but have several on Carriers, Tankers,

Barges, and other types of vessels and offshore platforms.

Too voluminous to list in this article, the Scienco/FAST client and install list since 1975 spans 36 pages, thousands of systems, and reads like “who’s who” of domestic inland operators, with dozens of repeat clients. In fact, the list of installs, which Scienco/FAST updates daily, includes some of the biggest names in the marine business, such as ARTCO, ACBL, Ingram Barge, Military Sealift Com- mand, US Corps of Engineers, USCG, US Navy including two Aircraft Carriers, the Canadian Royal Navy and Coast

Robert Rebori, Scienco/FAST President, explains it best, saying, “It all started in 1969, when St. Louis Ship

Building Co. occupied the same ground on which James

Eads built ironclads for the Union Navy during the Ameri- can Civil War. At the time, they were their own guinea pigs, installing and monitoring equipment on their own towboats. While also equipping other towboat custom- ers to provide repair work, this gradually expanded the

St. Louis Ship additional services and capabili- ties into other classes of vessels and offshore structures. There came the day when a customer needed a wastewater treat- ment system that could withstand the jostling out on the water, but also treat the sewage where it could be reused or discharged into the receiving waters.

FAST sewage treatment system was installed aboard the towboat M/V

Missouri while the ves- sel was underway. It was an immediate success.”

And, the rest is history.

CFR Part 159. Offcial testing was done aboard the towboat

M/V United States, while under- way, the Marine/FAST unit passed all 37 www.marinelink.com MN