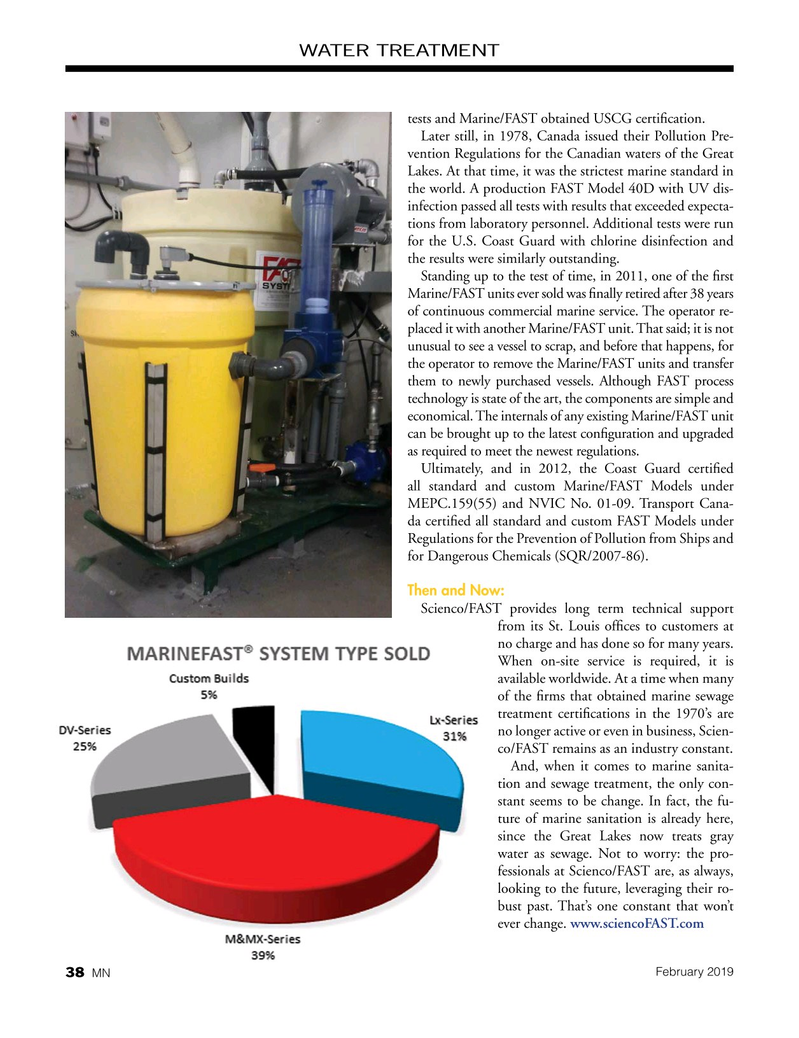 Later still, in 1978, Canada issued their Pollution Pre- vention Regulations for the Canadian waters of the Great

Lakes. At that time, it was the strictest marine standard in the world. A production FAST Model 40D with UV dis- infection passed all tests with results that exceeded expecta- tions from laboratory personnel. Additional tests were run for the U.S. Coast Guard with chlorine disinfection and the results were similarly outstanding.

Marine/FAST units ever sold was fnally retired after 38 years of continuous commercial marine service. The operator re- placed it with another Marine/FAST unit. That said; it is not unusual to see a vessel to scrap, and before that happens, for the operator to remove the Marine/FAST units and transfer them to newly purchased vessels. Although FAST process technology is state of the art, the components are simple and economical. The internals of any existing Marine/FAST unit can be brought up to the latest confguration and upgraded as required to meet the newest regulations.

Ultimately, and in 2012, the Coast Guard certifed all standard and custom Marine/FAST Models under

Regulations for the Prevention of Pollution from Ships and for Dangerous Chemicals (SQR/2007-86).

Scienco/FAST provides long term technical support from its St. Louis offces to customers at no charge and has done so for many years.

When on-site service is required, it is available worldwide. At a time when many of the frms that obtained marine sewage treatment certifcations in the 1970’s are no longer active or even in business, Scien- co/FAST remains as an industry constant.

And, when it comes to marine sanita- tion and sewage treatment, the only con- stant seems to be change. In fact, the fu- ture of marine sanitation is already here, since the Great Lakes now treats gray water as sewage. Not to worry: the pro- fessionals at Scienco/FAST are, as always, looking to the future, leveraging their ro- bust past. That’s one constant that won’t ever change. www.sciencoFAST.com