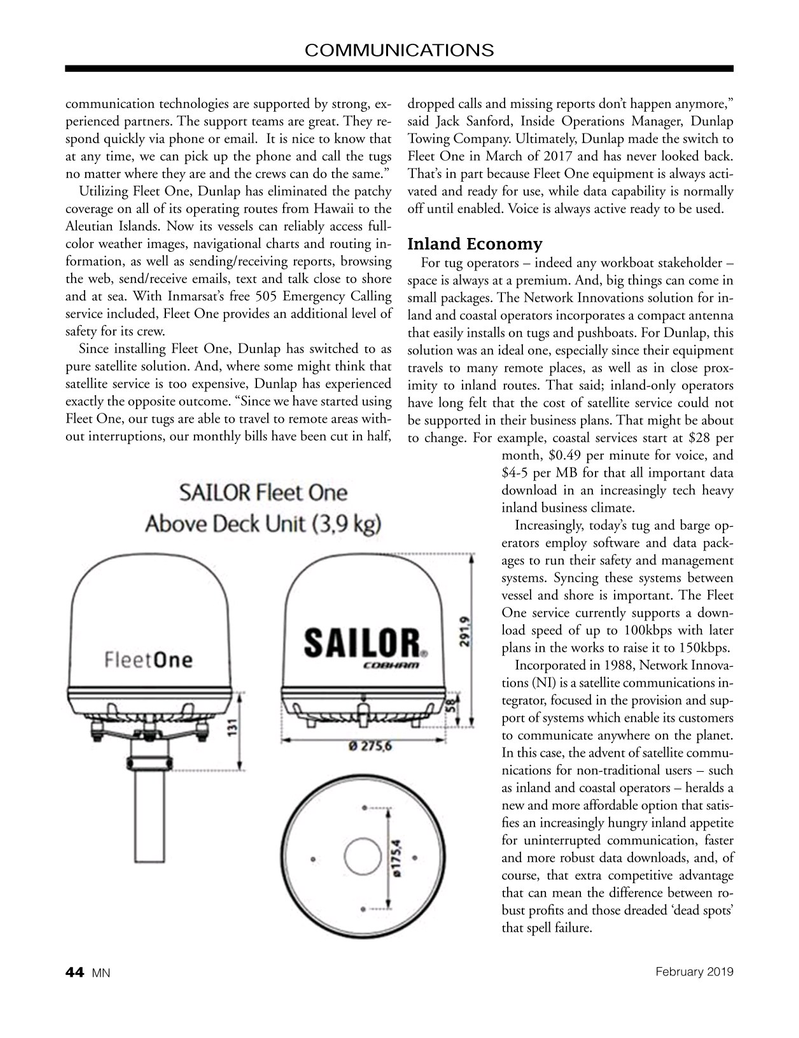 COMMUNICATIONS communication technologies are supported by strong, ex- dropped calls and missing reports don’t happen anymore,” perienced partners. The support teams are great. They re- said Jack Sanford, Inside Operations Manager, Dunlap spond quickly via phone or email. It is nice to know that Towing Company. Ultimately, Dunlap made the switch to at any time, we can pick up the phone and call the tugs Fleet One in March of 2017 and has never looked back. no matter where they are and the crews can do the same.” That’s in part because Fleet One equipment is always acti-

Utilizing Fleet One, Dunlap has eliminated the patchy vated and ready for use, while data capability is normally coverage on all of its operating routes from Hawaii to the off until enabled. Voice is always active ready to be used.

For tug operators – indeed any workboat stakeholder – the web, send/receive emails, text and talk close to shore space is always at a premium. And, big things can come in and at sea. With Inmarsat’s free 505 Emergency Calling small packages. The Network Innovations solution for in- service included, Fleet One provides an additional level of land and coastal operators incorporates a compact antenna safety for its crew. that easily installs on tugs and pushboats. For Dunlap, this

Since installing Fleet One, Dunlap has switched to as solution was an ideal one, especially since their equipment pure satellite solution. And, where some might think that travels to many remote places, as well as in close prox- satellite service is too expensive, Dunlap has experienced imity to inland routes. That said; inland-only operators exactly the opposite outcome. “Since we have started using have long felt that the cost of satellite service could not

Fleet One, our tugs are able to travel to remote areas with- be supported in their business plans. That might be about out interruptions, our monthly bills have been cut in half, to change. For example, coastal services start at $28 per month, $0.49 per minute for voice, and $4-5 per MB for that all important data download in an increasingly tech heavy inland business climate.

Increasingly, today’s tug and barge op- erators employ software and data pack- ages to run their safety and management systems. Syncing these systems between vessel and shore is important. The Fleet

One service currently supports a down- load speed of up to 100kbps with later plans in the works to raise it to 150kbps.

Incorporated in 1988, Network Innova- tions (NI) is a satellite communications in- tegrator, focused in the provision and sup- port of systems which enable its customers to communicate anywhere on the planet.

In this case, the advent of satellite commu- nications for non-traditional users – such as inland and coastal operators – heralds a new and more affordable option that satis- fes an increasingly hungry inland appetite for uninterrupted communication, faster and more robust data downloads, and, of course, that extra competitive advantage that can mean the difference between ro- bust profts and those dreaded ‘dead spots’ that spell failure.