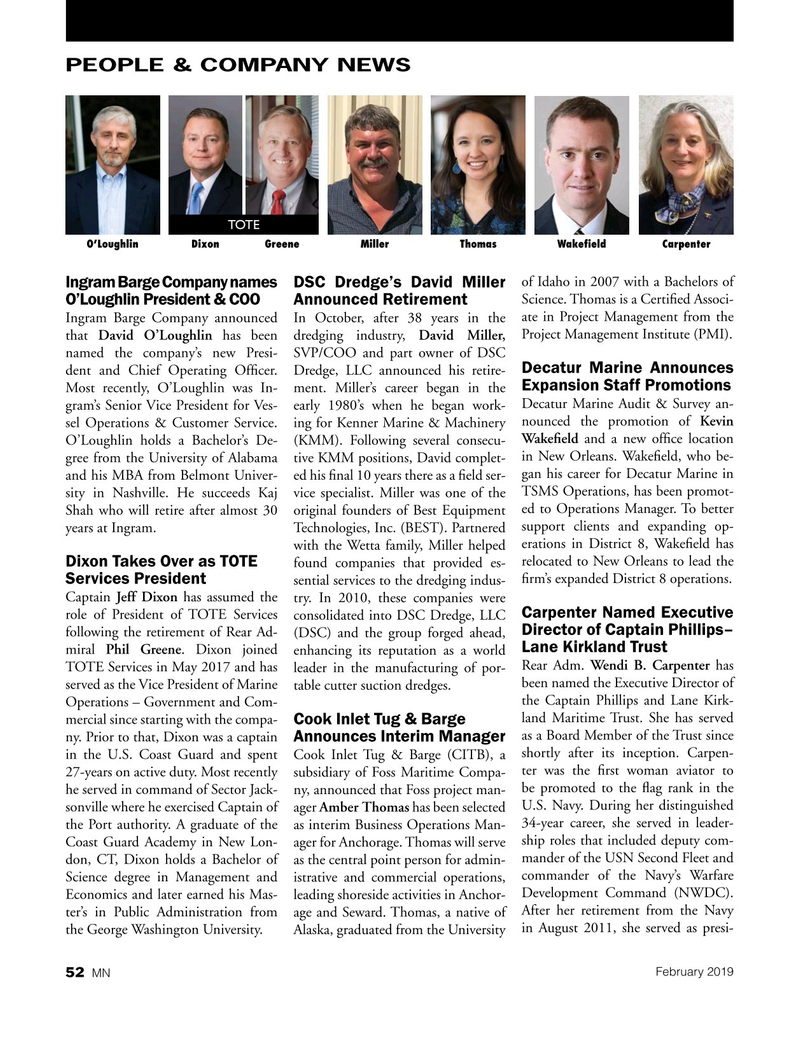 Science. Thomas is a Certifed Associ-

Ingram Barge Company announced In October, after 38 years in the ate in Project Management from the that David O’Loughlin has been dredging industry, David Miller, Project Management Institute (PMI). named the company’s new Presi- SVP/COO and part owner of DSC

Most recently, O’Loughlin was In- ment. Miller’s career began in the

Wakefeld and a new offce location

O’Loughlin holds a Bachelor’s De- (KMM). Following several consecu- in New Orleans. Wakefeld, who be- gree from the University of Alabama tive KMM positions, David complet- gan his career for Decatur Marine in and his MBA from Belmont Univer- ed his fnal 10 years there as a feld ser- sity in Nashville. He succeeds Kaj vice specialist. Miller was one of the TSMS Operations, has been promot-

Shah who will retire after almost 30 original founders of Best Equipment ed to Operations Manager. To better years at Ingram. Technologies, Inc. (BEST). Partnered support clients and expanding op- with the Wetta family, Miller helped erations in District 8, Wakefeld has relocated to New Orleans to lead the

Captain Jeff Dixon has assumed the try. In 2010, these companies were

Director of Captain Phillips– following the retirement of Rear Ad- (DSC) and the group forged ahead,

Rear Adm. Wendi B. Carpenter has

TOTE Services in May 2017 and has leader in the manufacturing of por- been named the Executive Director of served as the Vice President of Marine table cutter suction dredges.

the Captain Phillips and Lane Kirk-

Operations – Government and Com- land Maritime Trust. She has served mercial since starting with the compa-

Cook Inlet Tug & Barge as a Board Member of the Trust since ny. Prior to that, Dixon was a captain

Announces Interim Manager in the U.S. Coast Guard and spent Cook Inlet Tug & Barge (CITB), a shortly after its inception. Carpen- ter was the frst woman aviator to 27-years on active duty. Most recently subsidiary of Foss Maritime Compa- be promoted to the fag rank in the he served in command of Sector Jack- ny, announced that Foss project man- sonville where he exercised Captain of ager Amber Thomas has been selected U.S. Navy. During her distinguished 34-year career, she served in leader- the Port authority. A graduate of the as interim Business Operations Man-

Coast Guard Academy in New Lon- ager for Anchorage. Thomas will serve ship roles that included deputy com- mander of the USN Second Fleet and don, CT, Dixon holds a Bachelor of as the central point person for admin-

Science degree in Management and istrative and commercial operations, commander of the Navy’s Warfare

Economics and later earned his Mas- leading shoreside activities in Anchor- ter’s in Public Administration from age and Seward. Thomas, a native of After her retirement from the Navy the George Washington University.

Alaska, graduated from the University in August 2011, she served as presi-