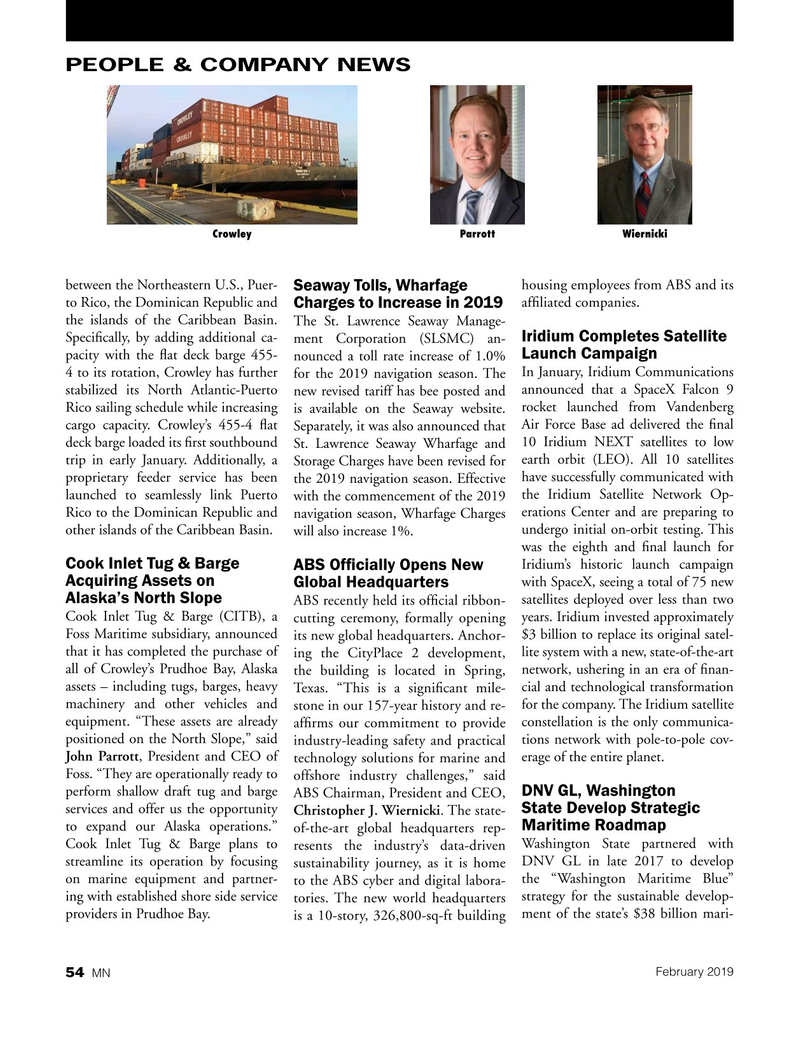 Crowley Parrott Wiernicki between the Northeastern U.S., Puer- housing employees from ABS and its

Charges to Increase in 2019 the islands of the Caribbean Basin. The St. Lawrence Seaway Manage-

Launch Campaign pacity with the fat deck barge 455- nounced a toll rate increase of 1.0% 4 to its rotation, Crowley has further for the 2019 navigation season. The In January, Iridium Communications stabilized its North Atlantic-Puerto new revised tariff has bee posted and announced that a SpaceX Falcon 9

Rico sailing schedule while increasing is available on the Seaway website. rocket launched from Vandenberg cargo capacity. Crowley’s 455-4 fat Separately, it was also announced that Air Force Base ad delivered the fnal deck barge loaded its frst southbound St. Lawrence Seaway Wharfage and 10 Iridium NEXT satellites to low trip in early January. Additionally, a Storage Charges have been revised for earth orbit (LEO). All 10 satellites proprietary feeder service has been the 2019 navigation season. Effective have successfully communicated with launched to seamlessly link Puerto with the commencement of the 2019 the Iridium Satellite Network Op-

Rico to the Dominican Republic and navigation season, Wharfage Charges erations Center and are preparing to undergo initial on-orbit testing. This other islands of the Caribbean Basin. will also increase 1%.

was the eighth and fnal launch for

Acquiring Assets on Global Headquarters with SpaceX, seeing a total of 75 new

Foss Maritime subsidiary, announced its new global headquarters. Anchor- $3 billion to replace its original satel- that it has completed the purchase of ing the CityPlace 2 development, lite system with a new, state-of-the-art all of Crowley’s Prudhoe Bay, Alaska the building is located in Spring, network, ushering in an era of fnan- assets – including tugs, barges, heavy Texas. “This is a signifcant mile- cial and technological transformation machinery and other vehicles and stone in our 157-year history and re- for the company. The Iridium satellite equipment. “These assets are already affrms our commitment to provide constellation is the only communica- positioned on the North Slope,” said industry-leading safety and practical tions network with pole-to-pole cov-

John Parrott, President and CEO of technology solutions for marine and erage of the entire planet.

Cook Inlet Tug & Barge plans to resents the industry’s data-driven Washington State partnered with streamline its operation by focusing sustainability journey, as it is home DNV GL in late 2017 to develop on marine equipment and partner- the “Washington Maritime Blue” to the ABS cyber and digital labora- ing with established shore side service tories. The new world headquarters strategy for the sustainable develop- providers in Prudhoe Bay. is a 10-story, 326,800-sq-ft building ment of the state’s $38 billion mari-