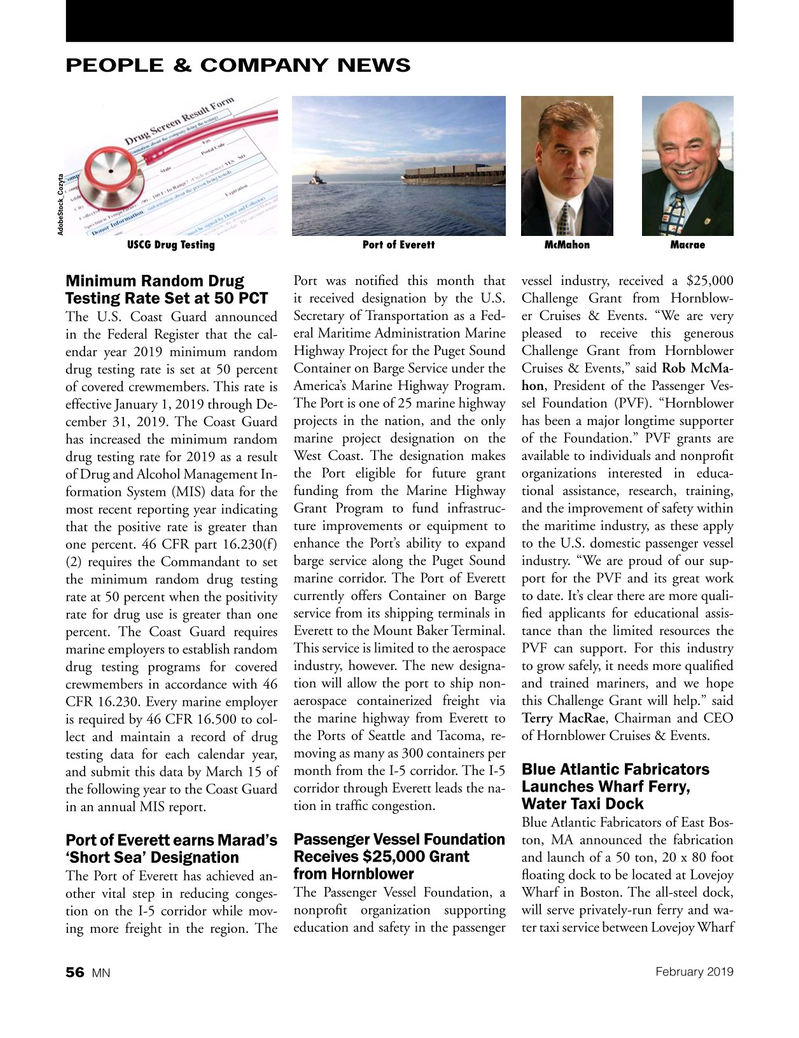 Port was notifed this month that vessel industry, received a $25,000

Minimum Random Drug it received designation by the U.S. Challenge Grant from Hornblow-

The U.S. Coast Guard announced Secretary of Transportation as a Fed- er Cruises & Events. “We are very in the Federal Register that the cal- eral Maritime Administration Marine pleased to receive this generous endar year 2019 minimum random Highway Project for the Puget Sound Challenge Grant from Hornblower drug testing rate is set at 50 percent Container on Barge Service under the Cruises & Events,” said Rob McMa- of covered crewmembers. This rate is America’s Marine Highway Program. hon, President of the Passenger Ves- effective January 1, 2019 through De- The Port is one of 25 marine highway sel Foundation (PVF). “Hornblower cember 31, 2019. The Coast Guard projects in the nation, and the only has been a major longtime supporter has increased the minimum random marine project designation on the of the Foundation.” PVF grants are drug testing rate for 2019 as a result West Coast. The designation makes available to individuals and nonproft of Drug and Alcohol Management In- the Port eligible for future grant organizations interested in educa- formation System (MIS) data for the funding from the Marine Highway tional assistance, research, training, most recent reporting year indicating Grant Program to fund infrastruc- and the improvement of safety within that the positive rate is greater than ture improvements or equipment to the maritime industry, as these apply one percent. 46 CFR part 16.230(f) enhance the Port’s ability to expand to the U.S. domestic passenger vessel (2) requires the Commandant to set barge service along the Puget Sound industry. “We are proud of our sup- the minimum random drug testing marine corridor. The Port of Everett port for the PVF and its great work rate at 50 percent when the positivity currently offers Container on Barge to date. It’s clear there are more quali- rate for drug use is greater than one service from its shipping terminals in fed applicants for educational assis- percent. The Coast Guard requires Everett to the Mount Baker Terminal. tance than the limited resources the marine employers to establish random This service is limited to the aerospace PVF can support. For this industry drug testing programs for covered industry, however. The new designa- to grow safely, it needs more qualifed crewmembers in accordance with 46 tion will allow the port to ship non- and trained mariners, and we hope

CFR 16.230. Every marine employer aerospace containerized freight via this Challenge Grant will help.” said is required by 46 CFR 16.500 to col- the marine highway from Everett to Terry MacRae, Chairman and CEO lect and maintain a record of drug the Ports of Seattle and Tacoma, re- of Hornblower Cruises & Events. testing data for each calendar year, moving as many as 300 containers per

Blue Atlantic Fabricators and submit this data by March 15 of month from the I-5 corridor. The I-5

Launches Wharf Ferry, the following year to the Coast Guard corridor through Everett leads the na-

The Port of Everett has achieved an- foating dock to be located at Lovejoy other vital step in reducing conges- The Passenger Vessel Foundation, a Wharf in Boston. The all-steel dock, tion on the I-5 corridor while mov- nonproft organization supporting will serve privately-run ferry and wa- ing more freight in the region. The education and safety in the passenger ter taxi service between Lovejoy Wharf