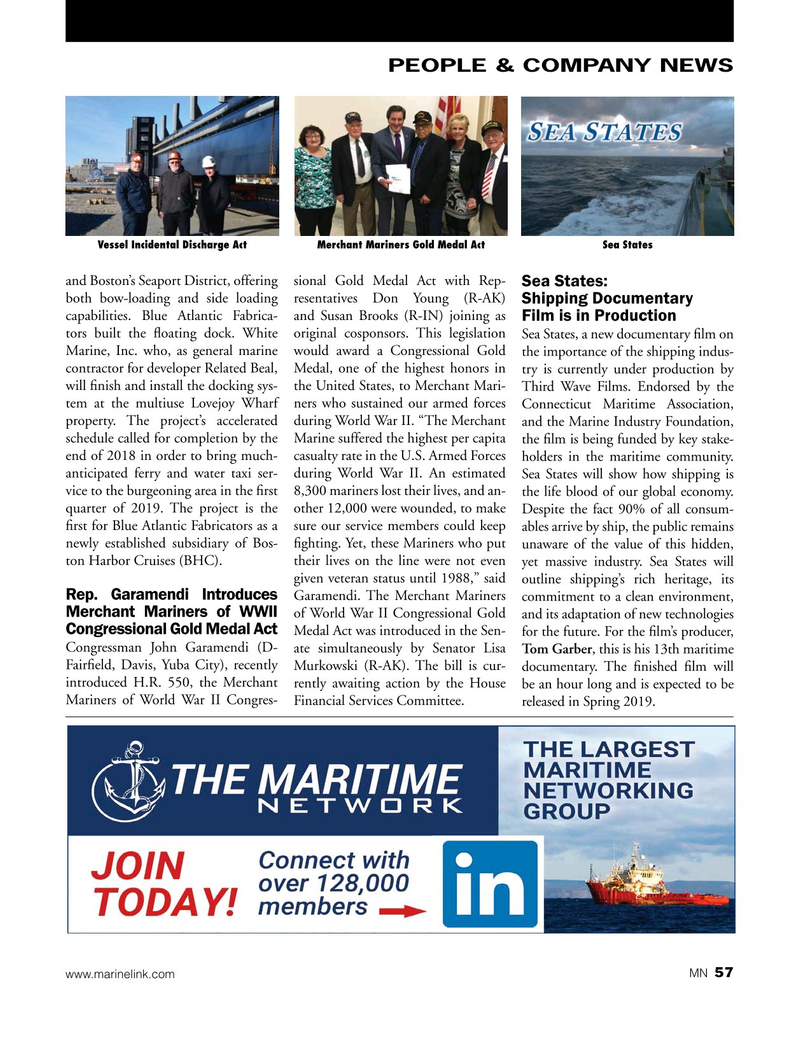 Marine, Inc. who, as general marine would award a Congressional Gold the importance of the shipping indus- contractor for developer Related Beal, Medal, one of the highest honors in try is currently under production by will fnish and install the docking sys- the United States, to Merchant Mari- Third Wave Films. Endorsed by the tem at the multiuse Lovejoy Wharf ners who sustained our armed forces Connecticut Maritime Association, property. The project’s accelerated during World War II. “The Merchant and the Marine Industry Foundation, schedule called for completion by the Marine suffered the highest per capita the flm is being funded by key stake- end of 2018 in order to bring much- casualty rate in the U.S. Armed Forces holders in the maritime community. anticipated ferry and water taxi ser- during World War II. An estimated Sea States will show how shipping is vice to the burgeoning area in the frst 8,300 mariners lost their lives, and an- the life blood of our global economy. quarter of 2019. The project is the other 12,000 were wounded, to make Despite the fact 90% of all consum- frst for Blue Atlantic Fabricators as a sure our service members could keep ables arrive by ship, the public remains newly established subsidiary of Bos- fghting. Yet, these Mariners who put unaware of the value of this hidden, ton Harbor Cruises (BHC). their lives on the line were not even yet massive industry. Sea States will given veteran status until 1988,” said outline shipping’s rich heritage, its

Garamendi. The Merchant Mariners commitment to a clean environment,

Medal Act was introduced in the Sen- for the future. For the flm’s producer,

Fairfeld, Davis, Yuba City), recently Murkowski (R-AK). The bill is cur- documentary. The fnished flm will introduced H.R. 550, the Merchant rently awaiting action by the House be an hour long and is expected to be