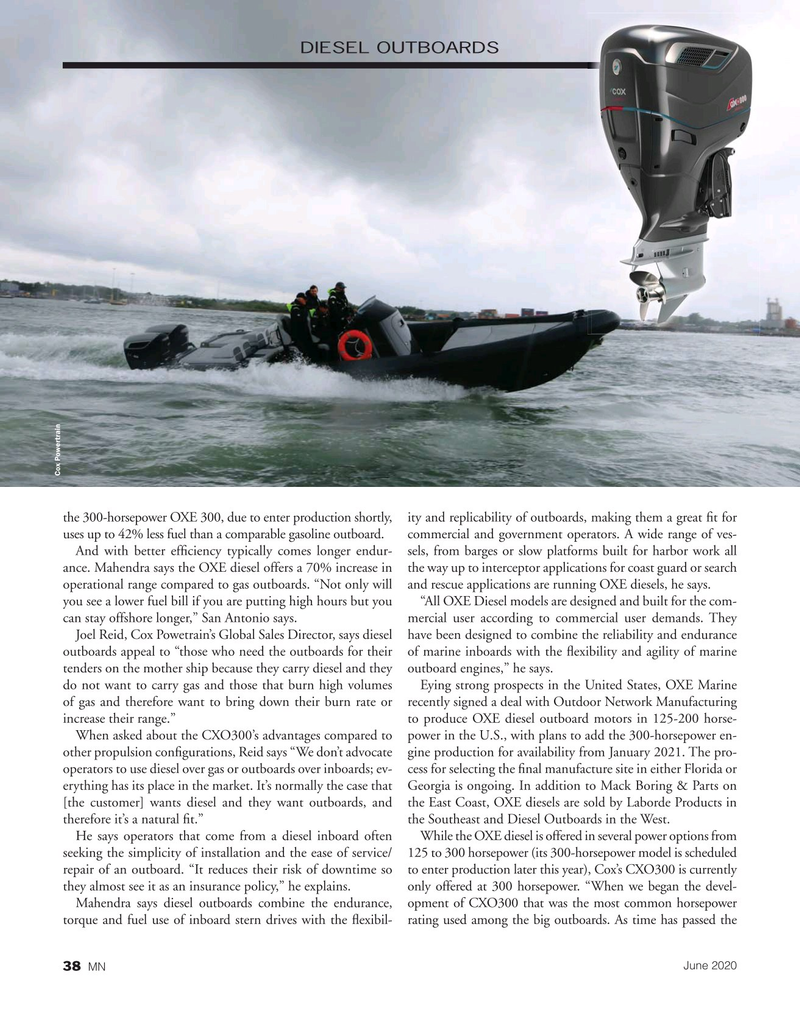 Cox Powertrain the 300-horsepower OXE 300, due to enter production shortly, ity and replicability of outboards, making them a great ?t for uses up to 42% less fuel than a comparable gasoline outboard. commercial and government operators. A wide range of ves-

And with better ef?ciency typically comes longer endur- sels, from barges or slow platforms built for harbor work all ance. Mahendra says the OXE diesel offers a 70% increase in the way up to interceptor applications for coast guard or search operational range compared to gas outboards. “Not only will and rescue applications are running OXE diesels, he says.

you see a lower fuel bill if you are putting high hours but you “All OXE Diesel models are designed and built for the com- can stay offshore longer,” San Antonio says. mercial user according to commercial user demands. They

Joel Reid, Cox Powetrain’s Global Sales Director, says diesel have been designed to combine the reliability and endurance outboards appeal to “those who need the outboards for their of marine inboards with the ?exibility and agility of marine tenders on the mother ship because they carry diesel and they outboard engines,” he says.

do not want to carry gas and those that burn high volumes Eying strong prospects in the United States, OXE Marine of gas and therefore want to bring down their burn rate or recently signed a deal with Outdoor Network Manufacturing increase their range.” to produce OXE diesel outboard motors in 125-200 horse-

When asked about the CXO300’s advantages compared to power in the U.S., with plans to add the 300-horsepower en- other propulsion con?gurations, Reid says “We don’t advocate gine production for availability from January 2021. The pro- operators to use diesel over gas or outboards over inboards; ev- cess for selecting the ?nal manufacture site in either Florida or erything has its place in the market. It’s normally the case that Georgia is ongoing. In addition to Mack Boring & Parts on [the customer] wants diesel and they want outboards, and the East Coast, OXE diesels are sold by Laborde Products in therefore it’s a natural ?t.” the Southeast and Diesel Outboards in the West.

He says operators that come from a diesel inboard often While the OXE diesel is offered in several power options from seeking the simplicity of installation and the ease of service/ 125 to 300 horsepower (its 300-horsepower model is scheduled repair of an outboard. “It reduces their risk of downtime so to enter production later this year), Cox’s CXO300 is currently they almost see it as an insurance policy,” he explains. only offered at 300 horsepower. “When we began the devel-

Mahendra says diesel outboards combine the endurance, opment of CXO300 that was the most common horsepower torque and fuel use of inboard stern drives with the ?exibil- rating used among the big outboards. As time has passed the