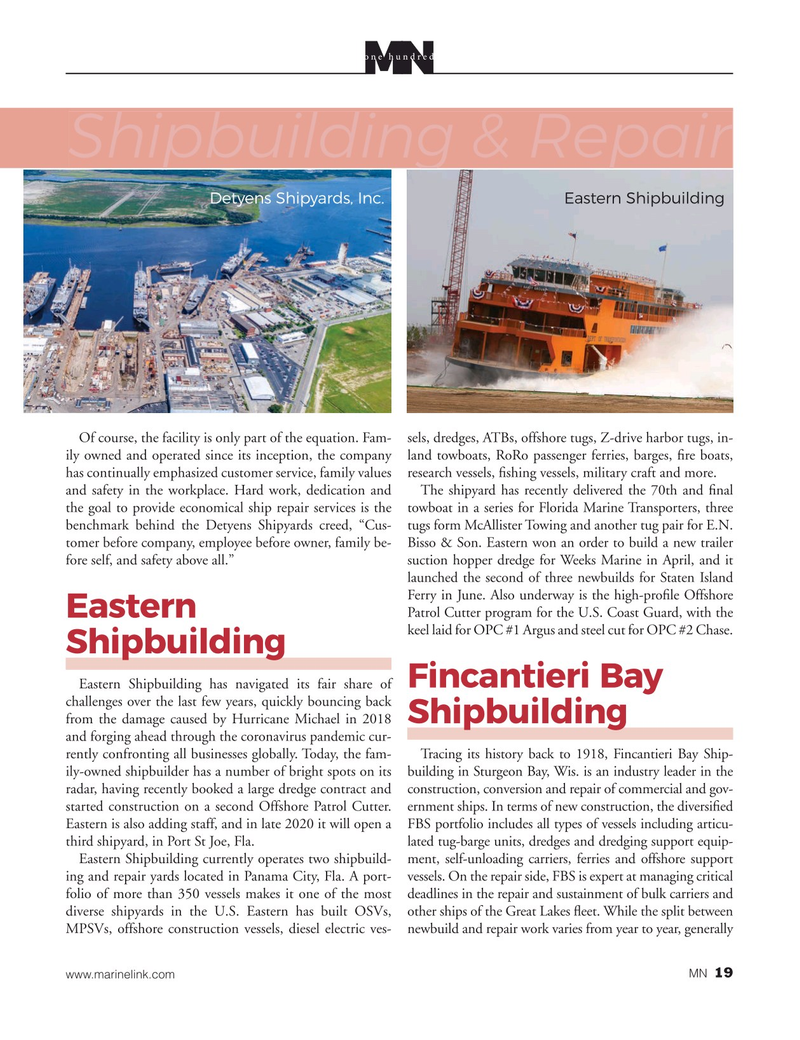 Of course, the facility is only part of the equation. Fam- sels, dredges, ATBs, offshore tugs, Z-drive harbor tugs, in- ily owned and operated since its inception, the company land towboats, RoRo passenger ferries, barges, ? re boats, has continually emphasized customer service, family values research vessels, ? shing vessels, military craft and more. and safety in the workplace. Hard work, dedication and The shipyard has recently delivered the 70th and ? nal the goal to provide economical ship repair services is the towboat in a series for Florida Marine Transporters, three benchmark behind the Detyens Shipyards creed, “Cus- tugs form McAllister Towing and another tug pair for E.N. tomer before company, employee before owner, family be- Bisso & Son. Eastern won an order to build a new trailer fore self, and safety above all.” suction hopper dredge for Weeks Marine in April, and it launched the second of three newbuilds for Staten Island

Ferry in June. Also underway is the high-pro? le Offshore

Patrol Cutter program for the U.S. Coast Guard, with the

Eastern Shipbuilding has navigated its fair share of challenges over the last few years, quickly bouncing back

Shipbuilding from the damage caused by Hurricane Michael in 2018 and forging ahead through the coronavirus pandemic cur- rently confronting all businesses globally. Today, the fam- Tracing its history back to 1918, Fincantieri Bay Ship- ily-owned shipbuilder has a number of bright spots on its building in Sturgeon Bay, Wis. is an industry leader in the radar, having recently booked a large dredge contract and construction, conversion and repair of commercial and gov- started construction on a second Offshore Patrol Cutter. ernment ships. In terms of new construction, the diversi? ed

Eastern is also adding staff, and in late 2020 it will open a FBS portfolio includes all types of vessels including articu- third shipyard, in Port St Joe, Fla. lated tug-barge units, dredges and dredging support equip-

Eastern Shipbuilding currently operates two shipbuild- ment, self-unloading carriers, ferries and offshore support ing and repair yards located in Panama City, Fla. A port- vessels. On the repair side, FBS is expert at managing critical folio of more than 350 vessels makes it one of the most deadlines in the repair and sustainment of bulk carriers and diverse shipyards in the U.S. Eastern has built OSVs, other ships of the Great Lakes ? eet. While the split between