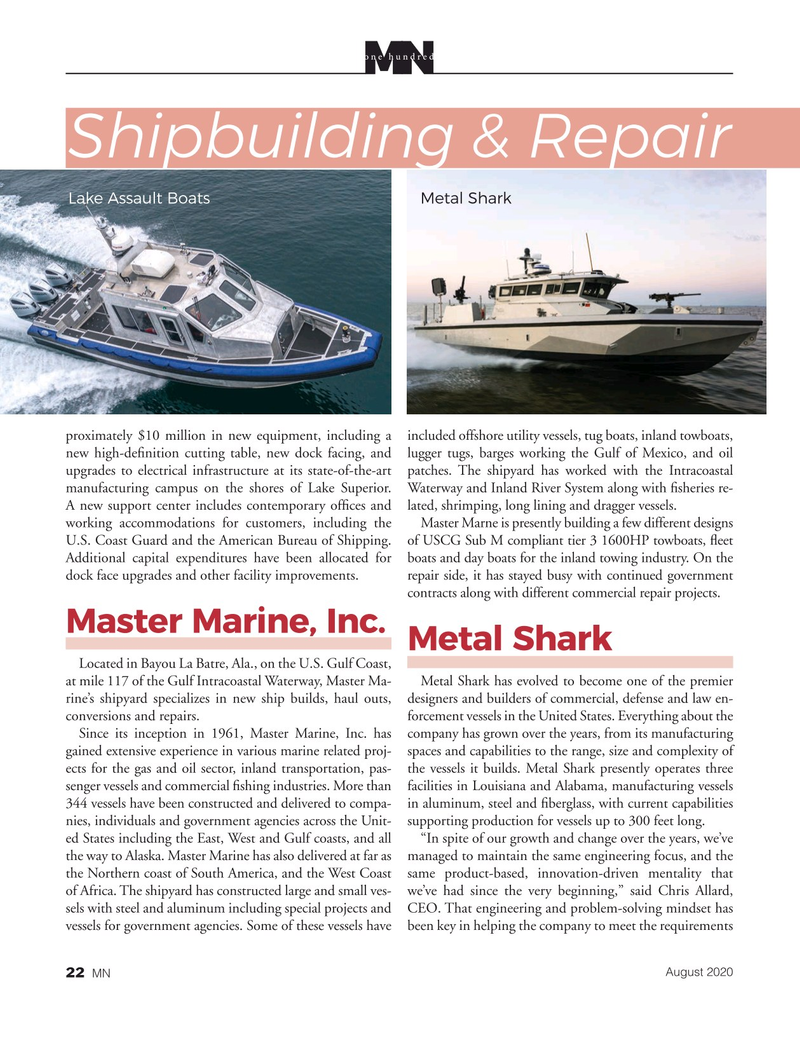 Additional capital expenditures have been allocated for boats and day boats for the inland towing industry. On the dock face upgrades and other facility improvements. repair side, it has stayed busy with continued government contracts along with different commercial repair projects.

Located in Bayou La Batre, Ala., on the U.S. Gulf Coast, at mile 117 of the Gulf Intracoastal Waterway, Master Ma- Metal Shark has evolved to become one of the premier rine’s shipyard specializes in new ship builds, haul outs, designers and builders of commercial, defense and law en- conversions and repairs. forcement vessels in the United States. Everything about the

Since its inception in 1961, Master Marine, Inc. has company has grown over the years, from its manufacturing gained extensive experience in various marine related proj- spaces and capabilities to the range, size and complexity of ects for the gas and oil sector, inland transportation, pas- the vessels it builds. Metal Shark presently operates three senger vessels and commercial ? shing industries. More than facilities in Louisiana and Alabama, manufacturing vessels 344 vessels have been constructed and delivered to compa- in aluminum, steel and ? berglass, with current capabilities nies, individuals and government agencies across the Unit- supporting production for vessels up to 300 feet long.

ed States including the East, West and Gulf coasts, and all “In spite of our growth and change over the years, we’ve the way to Alaska. Master Marine has also delivered at far as managed to maintain the same engineering focus, and the the Northern coast of South America, and the West Coast same product-based, innovation-driven mentality that of Africa. The shipyard has constructed large and small ves- we’ve had since the very beginning,” said Chris Allard, sels with steel and aluminum including special projects and CEO. That engineering and problem-solving mindset has vessels for government agencies. Some of these vessels have been key in helping the company to meet the requirements