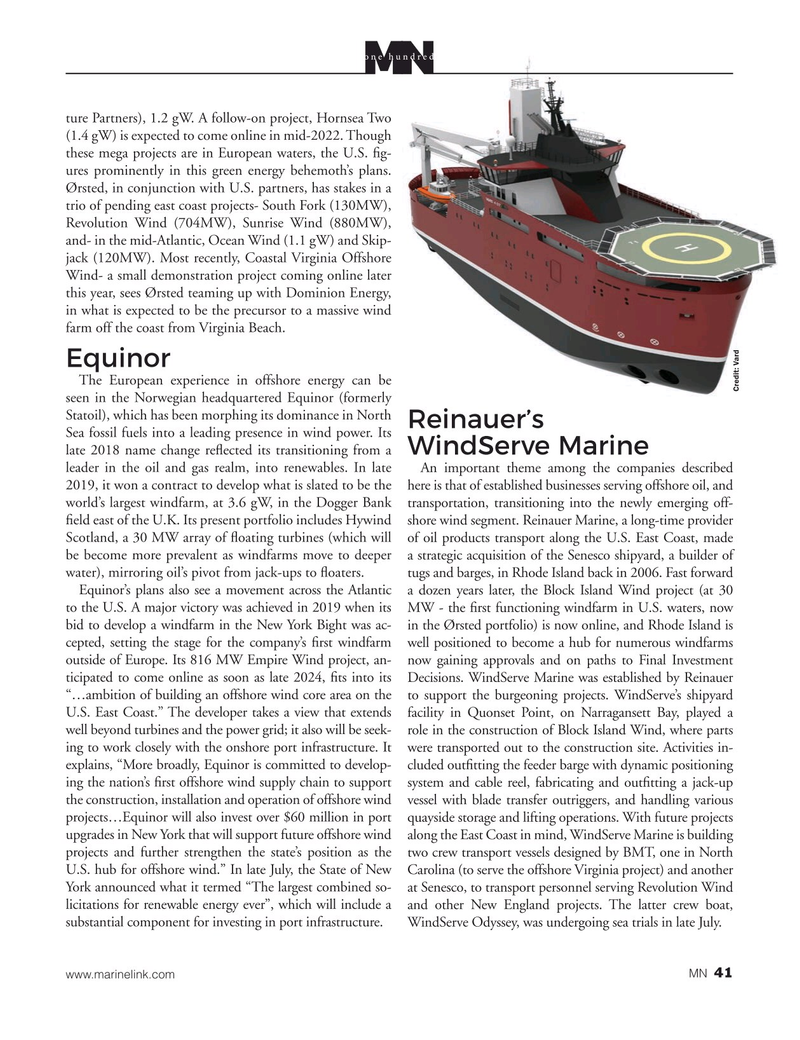 one hundred ture Partners), 1.2 gW. A follow-on project, Hornsea Two (1.4 gW) is expected to come online in mid-2022. Though these mega projects are in European waters, the U.S. ? g- ures prominently in this green energy behemoth’s plans.

Ørsted, in conjunction with U.S. partners, has stakes in a trio of pending east coast projects- South Fork (130MW),

Wind- a small demonstration project coming online later this year, sees Ørsted teaming up with Dominion Energy, in what is expected to be the precursor to a massive wind farm off the coast from Virginia Beach.

The European experience in offshore energy can be

Statoil), which has been morphing its dominance in North

Sea fossil fuels into a leading presence in wind power. Its late 2018 name change re? ected its transitioning from a

WindServe Marine leader in the oil and gas realm, into renewables. In late An important theme among the companies described 2019, it won a contract to develop what is slated to be the here is that of established businesses serving offshore oil, and world’s largest windfarm, at 3.6 gW, in the Dogger Bank transportation, transitioning into the newly emerging off- ? eld east of the U.K. Its present portfolio includes Hywind shore wind segment. Reinauer Marine, a long-time provider

Scotland, a 30 MW array of ? oating turbines (which will of oil products transport along the U.S. East Coast, made be become more prevalent as windfarms move to deeper a strategic acquisition of the Senesco shipyard, a builder of water), mirroring oil’s pivot from jack-ups to ? oaters. tugs and barges, in Rhode Island back in 2006. Fast forward

Equinor’s plans also see a movement across the Atlantic a dozen years later, the Block Island Wind project (at 30 to the U.S. A major victory was achieved in 2019 when its MW - the ? rst functioning windfarm in U.S. waters, now bid to develop a windfarm in the New York Bight was ac- in the Ørsted portfolio) is now online, and Rhode Island is cepted, setting the stage for the company’s ? rst windfarm well positioned to become a hub for numerous windfarms outside of Europe. Its 816 MW Empire Wind project, an- now gaining approvals and on paths to Final Investment ticipated to come online as soon as late 2024, ? ts into its Decisions. WindServe Marine was established by Reinauer “…ambition of building an offshore wind core area on the to support the burgeoning projects. WindServe’s shipyard

U.S. East Coast.” The developer takes a view that extends facility in Quonset Point, on Narragansett Bay, played a well beyond turbines and the power grid; it also will be seek- role in the construction of Block Island Wind, where parts ing to work closely with the onshore port infrastructure. It were transported out to the construction site. Activities in- explains, “More broadly, Equinor is committed to develop- cluded out? tting the feeder barge with dynamic positioning ing the nation’s ? rst offshore wind supply chain to support system and cable reel, fabricating and out? tting a jack-up the construction, installation and operation of offshore wind vessel with blade transfer outriggers, and handling various projects…Equinor will also invest over $60 million in port quayside storage and lifting operations. With future projects upgrades in New York that will support future offshore wind along the East Coast in mind, WindServe Marine is building projects and further strengthen the state’s position as the two crew transport vessels designed by BMT, one in North

U.S. hub for offshore wind.” In late July, the State of New Carolina (to serve the offshore Virginia project) and another

York announced what it termed “The largest combined so- at Senesco, to transport personnel serving Revolution Wind licitations for renewable energy ever”, which will include a and other New England projects. The latter crew boat, substantial component for investing in port infrastructure. WindServe Odyssey, was undergoing sea trials in late July. 41 www.marinelink.com MN