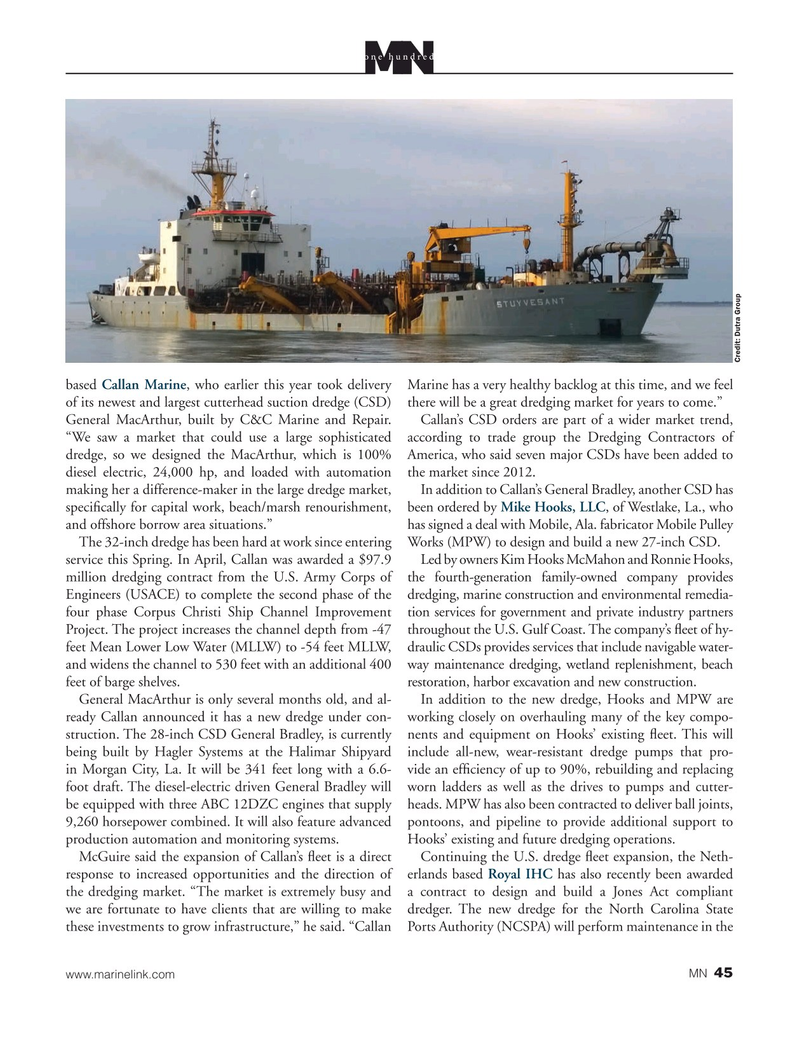 Credit: Dutra Group based Callan Marine, who earlier this year took delivery Marine has a very healthy backlog at this time, and we feel of its newest and largest cutterhead suction dredge (CSD) there will be a great dredging market for years to come.”

General MacArthur, built by C&C Marine and Repair. Callan’s CSD orders are part of a wider market trend, “We saw a market that could use a large sophisticated according to trade group the Dredging Contractors of dredge, so we designed the MacArthur, which is 100% America, who said seven major CSDs have been added to diesel electric, 24,000 hp, and loaded with automation the market since 2012. making her a difference-maker in the large dredge market, In addition to Callan’s General Bradley, another CSD has speci? cally for capital work, beach/marsh renourishment, been ordered by Mike Hooks, LLC, of Westlake, La., who and offshore borrow area situations.” has signed a deal with Mobile, Ala. fabricator Mobile Pulley

The 32-inch dredge has been hard at work since entering Works (MPW) to design and build a new 27-inch CSD. service this Spring. In April, Callan was awarded a $97.9 Led by owners Kim Hooks McMahon and Ronnie Hooks, million dredging contract from the U.S. Army Corps of the fourth-generation family-owned company provides

General MacArthur is only several months old, and al- In addition to the new dredge, Hooks and MPW are ready Callan announced it has a new dredge under con- working closely on overhauling many of the key compo- struction. The 28-inch CSD General Bradley, is currently nents and equipment on Hooks’ existing ? eet. This will being built by Hagler Systems at the Halimar Shipyard include all-new, wear-resistant dredge pumps that pro- in Morgan City, La. It will be 341 feet long with a 6.6- vide an ef? ciency of up to 90%, rebuilding and replacing foot draft. The diesel-electric driven General Bradley will worn ladders as well as the drives to pumps and cutter- be equipped with three ABC 12DZC engines that supply heads. MPW has also been contracted to deliver ball joints, 9,260 horsepower combined. It will also feature advanced pontoons, and pipeline to provide additional support to production automation and monitoring systems. Hooks’ existing and future dredging operations.

McGuire said the expansion of Callan’s ? eet is a direct Continuing the U.S. dredge ? eet expansion, the Neth- response to increased opportunities and the direction of erlands based Royal IHC has also recently been awarded the dredging market. “The market is extremely busy and a contract to design and build a Jones Act compliant we are fortunate to have clients that are willing to make dredger. The new dredge for the North Carolina State these investments to grow infrastructure,” he said. “Callan Ports Authority (NCSPA) will perform maintenance in the 45 www.marinelink.com MN