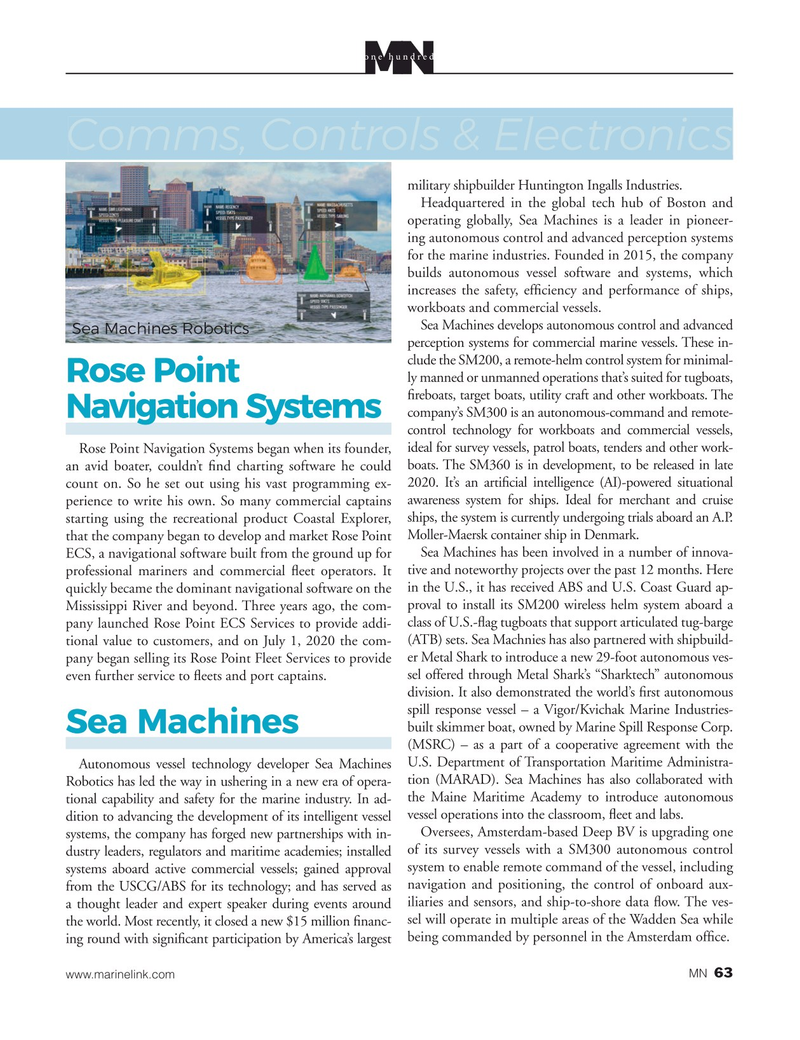 Headquartered in the global tech hub of Boston and operating globally, Sea Machines is a leader in pioneer- ing autonomous control and advanced perception systems for the marine industries. Founded in 2015, the company builds autonomous vessel software and systems, which increases the safety, ef? ciency and performance of ships, workboats and commercial vessels.

Rose Point ? reboats, target boats, utility craft and other workboats. The company’s SM300 is an autonomous-command and remote-

Rose Point Navigation Systems began when its founder, ideal for survey vessels, patrol boats, tenders and other work- an avid boater, couldn’t ? nd charting software he could boats. The SM360 is in development, to be released in late count on. So he set out using his vast programming ex- 2020. It’s an arti? cial intelligence (AI)-powered situational perience to write his own. So many commercial captains awareness system for ships. Ideal for merchant and cruise starting using the recreational product Coastal Explorer, ships, the system is currently undergoing trials aboard an A.P. that the company began to develop and market Rose Point Moller-Maersk container ship in Denmark.

ECS, a navigational software built from the ground up for Sea Machines has been involved in a number of innova- professional mariners and commercial ? eet operators. It tive and noteworthy projects over the past 12 months. Here quickly became the dominant navigational software on the in the U.S., it has received ABS and U.S. Coast Guard ap-

Robotics has led the way in ushering in a new era of opera- the Maine Maritime Academy to introduce autonomous tional capability and safety for the marine industry. In ad- dition to advancing the development of its intelligent vessel vessel operations into the classroom, ? eet and labs.

Oversees, Amsterdam-based Deep BV is upgrading one systems, the company has forged new partnerships with in- dustry leaders, regulators and maritime academies; installed of its survey vessels with a SM300 autonomous control systems aboard active commercial vessels; gained approval system to enable remote command of the vessel, including from the USCG/ABS for its technology; and has served as navigation and positioning, the control of onboard aux- a thought leader and expert speaker during events around iliaries and sensors, and ship-to-shore data ? ow. The ves- sel will operate in multiple areas of the Wadden Sea while the world. Most recently, it closed a new $15 million ? nanc- ing round with signi? cant participation by America’s largest being commanded by personnel in the Amsterdam of? ce.