Out-casting and Outlasting the Competition

A captain claims victory at the end of a popular high-stakes fishing competition thanks to help from a new electronic boat control system.

When the Summer to Fall bluefin tuna season ends in Gloucester, Mass., it’s only just beginning in North Carolina’s Outer Banks. It’s in these rough waters that commercial fishermen compete on the TV show, “Wicked Tuna: Outer Banks.” A spin-off of the original “Wicked Tuna,” this series has run on National Geographic since 2014 and recently completed its seventh season on air in September 2020.

Fishing for bluefin tuna comes with unique challenges. Weighing up to half a ton, these fish are difficult to reel in. In addition, commercial fishermen face a short fishing season, a declining tuna population and strict government catch quotas. With these limitations, the fishermen can’t afford to take to the seas with substandard equipment.

No one knew this better than Tyler McLaughlin, captain of the 45-foot boat, the PinWheel. Featured on the original, Gloucester-based “Wicked Tuna” series, the captain has recently claimed victory on “Outer Banks.” This win wouldn’t have been possible without new electronic boat controls from Emerson, a specialist in automation technologies, enabling McLaughlin to successfully adapt to the fishing style of the south.

North versus south fishing challenges
Compared to tuna fishing in Gloucester, America’s oldest seaport and home of the original “Wicked Tuna” series, tuna fishing in the Outer Banks can throw even the most seasoned fisherman for a loop. Gloucester fishermen are accustomed to anchoring themselves in one spot and waiting for the tuna to come to them. Because there are so many tuna in the area, fishermen don’t have to waste valuable fuel pursuing them.

But in the Outer Banks, it’s a different story. For one, the weather is more unpredictable, promising rougher seas. In addition, fishermen who are more accustomed to the rod-and-reel technique favored in the north must engage in trolling, a fishing technique that involves dragging baited fishing lines behind the boat through the water. The boats must always stay in motion, which keeps the bait “swimming” as naturally as possible.

Due to this technique, the most successful boats on “Outer Banks” incorporate special proportional hydraulic valves on their gearbox called trolling valves. These valves transfer the engine’s power to the propeller behind the boat, allowing the fishermen to slow the boat’s speed. When first tackling the waves of the Outer Banks, McLaughlin’s PinWheel didn’t have these trolling capabilities, as the boat was originally intended for northern fishing. If he wanted success in the southern waters, something would have to change. 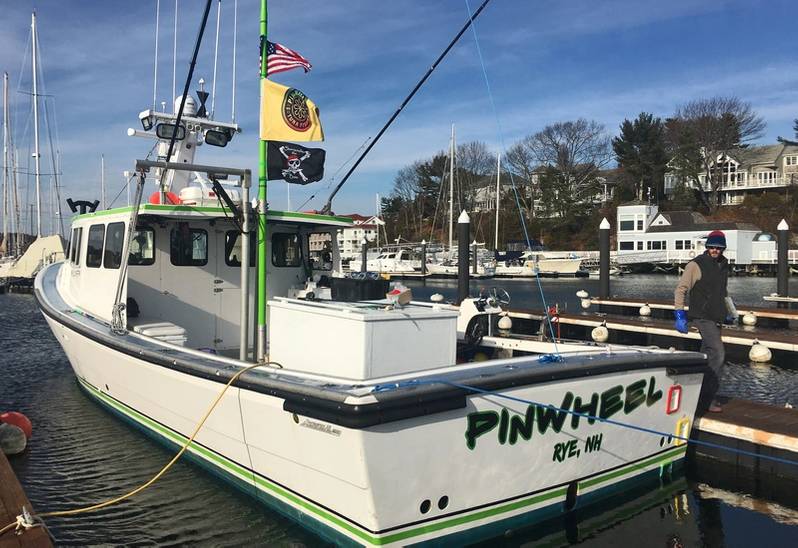 First the Falcon, now the PinWheel
As luck would have it, the Manager of Business Development Marine at Emerson, Steve Vincent, was a fan of the “Wicked Tuna” series. Vincent recognized the need for the Outer Banks fishermen to be able to maneuver their vessels quickly from different locations on their boat, especially when reeling in a large, half-ton tuna.

Vincent first approached McLaughlin’s fellow “Wicked Tuna” contestant, Dave Marciano, and together upgraded the mechanical control system on Maricano’s boat, the Falcon. McLaughlin witnessed the ways this upgrade made Marciano a more formidable competitor on the show, and was eager to make the same modifications to the PinWheel.

Vincent, who works in the marine technology division at AVENTICS, an Emerson company that manufactures electronic and pneumatic components for the marine industry, suggested equipping McLaughlin’s PinWheel with the Marex OS III—the same system used on Marciano’s boat. An electronic control system for pitch propellers, jet propulsion and reversing gear systems, the Marex OS III is easy to integrate, accommodates up to six control stations and eliminates the extra force required to manually operate control heads between stations. 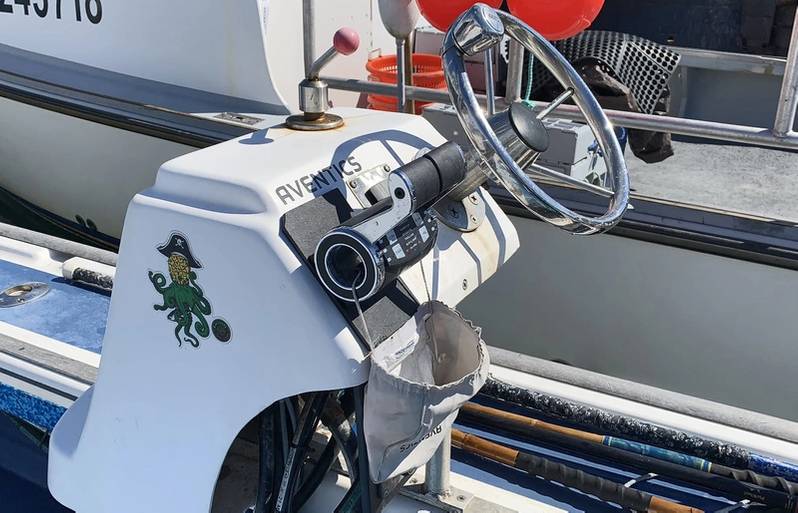 Trolling to Victory With the Marex OS III
In addition to its flexible design, ease of use and modular system architecture, the Marex OS III includes advanced features that have improved the PinWheel’s maneuverability. As a single-engine boat with two control stations, it has given McLaughlin the freedom to control his vessel from the helm or stern.

In addition, the PinWheel now has trolling capabilities. The system’s trolling valve, which is an adjustable device incorporated into the boat’s hydraulic system, regulates the pressure between zero and full operating pressure. This feature reduces the propeller speed at a given engine speed, enabling McLaughlin to achieve lower speeds than what is possible for normal gear engagement. As a result of this new capability, McLaughlin can now drag his bait slowly through the water while also maneuvering the boat in and out of the harbor with ease.

Upgrading the PinWheel with the Marex OS III system has brought McLaughlin up to speed with many of the other vessels featured in “Wicked Tuna: Outer Banks.” It has also had a positive impact on his performance during the show—ultimately helping him reel in his victory.

“This new system has allowed me to maneuver the PinWheel quickly and efficiently and also slow the boat down for trolling—all of which has helped me catch more fish,” McLaughlin says. “This marks the first time in the show’s history a northern boat has successfully competed against southern boats and won. I couldn’t be more proud.” 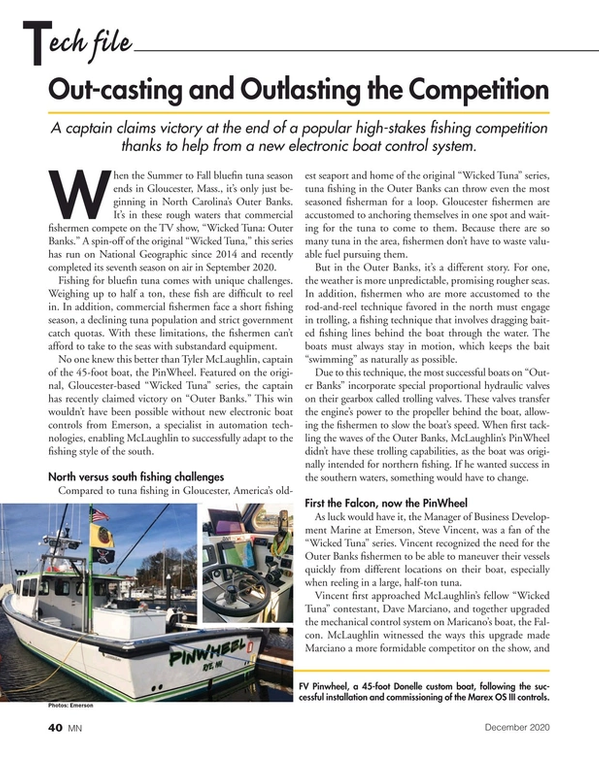 Read Out-casting and Outlasting the Competition in Pdf, Flash or Html5 edition of December 2020 Marine News

Other stories from December 2020 issue