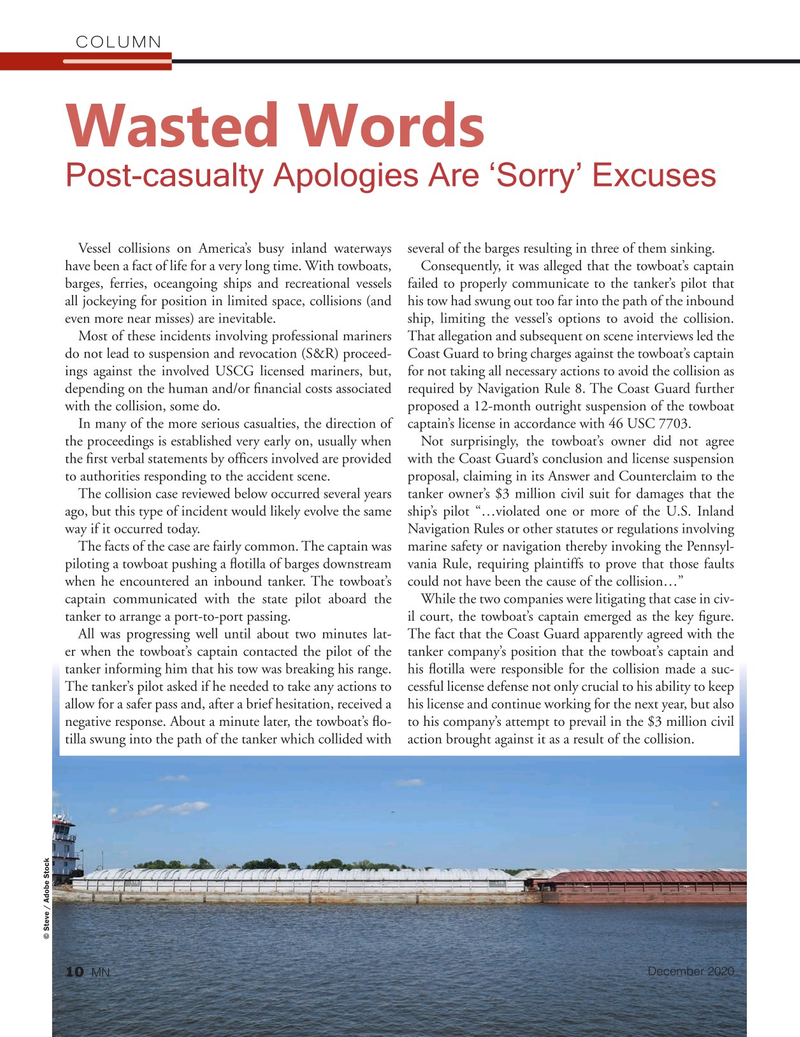 Vessel collisions on America’s busy inland waterways several of the barges resulting in three of them sinking.

have been a fact of life for a very long time. With towboats, Consequently, it was alleged that the towboat’s captain barges, ferries, oceangoing ships and recreational vessels failed to properly communicate to the tanker’s pilot that all jockeying for position in limited space, collisions (and his tow had swung out too far into the path of the inbound even more near misses) are inevitable. ship, limiting the vessel’s options to avoid the collision.

Most of these incidents involving professional mariners That allegation and subsequent on scene interviews led the do not lead to suspension and revocation (S&R) proceed- Coast Guard to bring charges against the towboat’s captain ings against the involved USCG licensed mariners, but, for not taking all necessary actions to avoid the collision as depending on the human and/or ? nancial costs associated required by Navigation Rule 8. The Coast Guard further with the collision, some do. proposed a 12-month outright suspension of the towboat

In many of the more serious casualties, the direction of captain’s license in accordance with 46 USC 7703.

the proceedings is established very early on, usually when Not surprisingly, the towboat’s owner did not agree the ? rst verbal statements by of? cers involved are provided with the Coast Guard’s conclusion and license suspension to authorities responding to the accident scene. proposal, claiming in its Answer and Counterclaim to the

The collision case reviewed below occurred several years tanker owner’s $3 million civil suit for damages that the ago, but this type of incident would likely evolve the same ship’s pilot “…violated one or more of the U.S. Inland way if it occurred today. Navigation Rules or other statutes or regulations involving

The facts of the case are fairly common. The captain was marine safety or navigation thereby invoking the Pennsyl- piloting a towboat pushing a ? otilla of barges downstream vania Rule, requiring plaintiffs to prove that those faults when he encountered an inbound tanker. The towboat’s could not have been the cause of the collision…” captain communicated with the state pilot aboard the While the two companies were litigating that case in civ- tanker to arrange a port-to-port passing. il court, the towboat’s captain emerged as the key ? gure.

All was progressing well until about two minutes lat- The fact that the Coast Guard apparently agreed with the er when the towboat’s captain contacted the pilot of the tanker company’s position that the towboat’s captain and tanker informing him that his tow was breaking his range. his ? otilla were responsible for the collision made a suc-

The tanker’s pilot asked if he needed to take any actions to cessful license defense not only crucial to his ability to keep allow for a safer pass and, after a brief hesitation, received a his license and continue working for the next year, but also negative response. About a minute later, the towboat’s ? o- to his company’s attempt to prevail in the $3 million civil tilla swung into the path of the tanker which collided with action brought against it as a result of the collision.