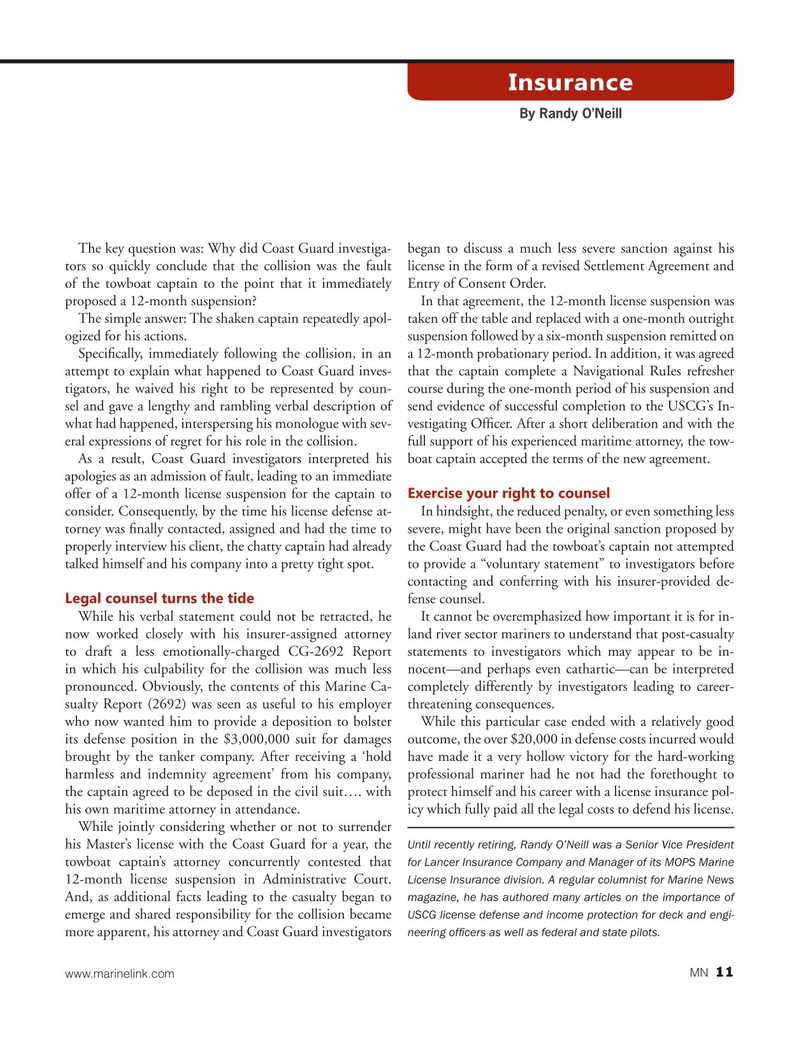 The key question was: Why did Coast Guard investiga- began to discuss a much less severe sanction against his tors so quickly conclude that the collision was the fault license in the form of a revised Settlement Agreement and of the towboat captain to the point that it immediately Entry of Consent Order. proposed a 12-month suspension? In that agreement, the 12-month license suspension was

The simple answer: The shaken captain repeatedly apol- taken off the table and replaced with a one-month outright ogized for his actions. suspension followed by a six-month suspension remitted on

Speci? cally, immediately following the collision, in an a 12-month probationary period. In addition, it was agreed attempt to explain what happened to Coast Guard inves- that the captain complete a Navigational RuIes refresher tigators, he waived his right to be represented by coun- course during the one-month period of his suspension and sel and gave a lengthy and rambling verbal description of send evidence of successful completion to the USCG’s In- what had happened, interspersing his monologue with sev- vestigating Of? cer. After a short deliberation and with the eral expressions of regret for his role in the collision. full support of his experienced maritime attorney, the tow-

As a result, Coast Guard investigators interpreted his boat captain accepted the terms of the new agreement.

apologies as an admission of fault, leading to an immediate offer of a 12-month license suspension for the captain to Exercise your right to counsel consider. Consequently, by the time his license defense at- In hindsight, the reduced penalty, or even something less torney was ? nally contacted, assigned and had the time to severe, might have been the original sanction proposed by properly interview his client, the chatty captain had already the Coast Guard had the towboat’s captain not attempted talked himself and his company into a pretty tight spot. to provide a “voluntary statement” to investigators before contacting and conferring with his insurer-provided de-

While his verbal statement could not be retracted, he It cannot be overemphasized how important it is for in- now worked closely with his insurer-assigned attorney land river sector mariners to understand that post-casualty to draft a less emotionally-charged CG-2692 Report statements to investigators which may appear to be in- in which his culpability for the collision was much less nocent—and perhaps even cathartic—can be interpreted pronounced. Obviously, the contents of this Marine Ca- completely differently by investigators leading to career- sualty Report (2692) was seen as useful to his employer threatening consequences. who now wanted him to provide a deposition to bolster While this particular case ended with a relatively good its defense position in the $3,000,000 suit for damages outcome, the over $20,000 in defense costs incurred would brought by the tanker company. After receiving a ‘hold have made it a very hollow victory for the hard-working harmless and indemnity agreement’ from his company, professional mariner had he not had the forethought to the captain agreed to be deposed in the civil suit…. with protect himself and his career with a license insurance pol- his own maritime attorney in attendance. icy which fully paid all the legal costs to defend his license.

While jointly considering whether or not to surrender his Master’s license with the Coast Guard for a year, the

And, as additional facts leading to the casualty began to magazine, he has authored many articles on the importance of emerge and shared responsibility for the collision became

USCG license defense and income protection for deck and engi- more apparent, his attorney and Coast Guard investigators neering of? cers as well as federal and state pilots.