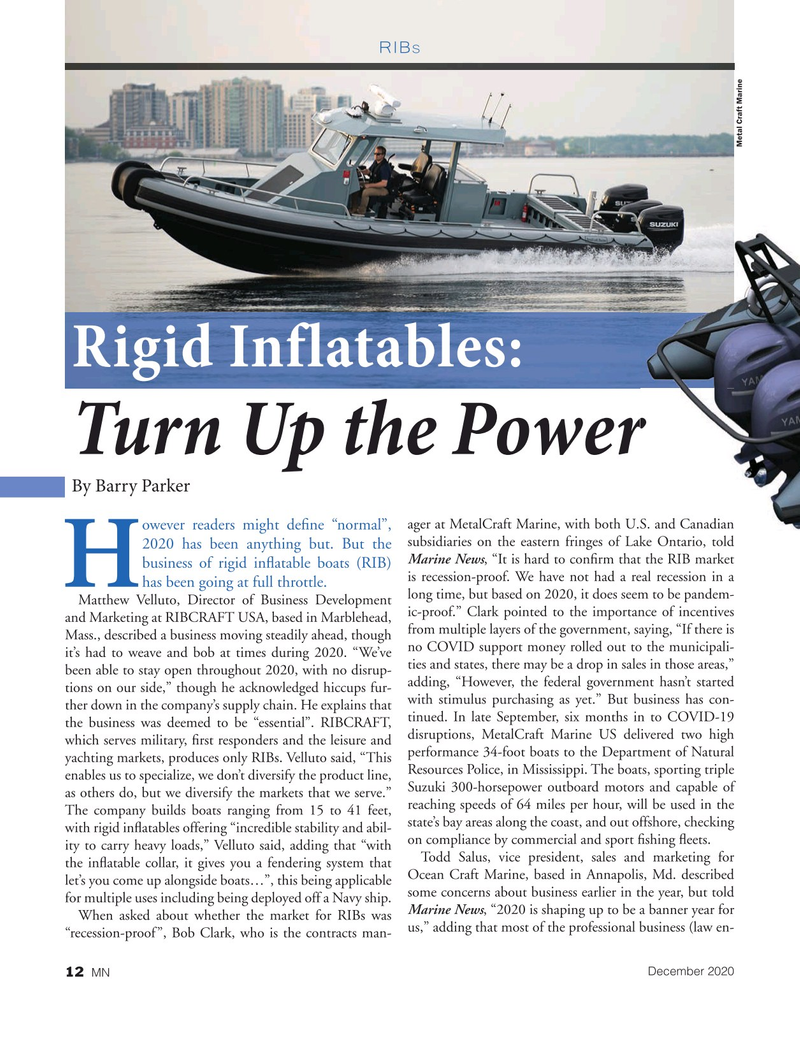 Turn Up the Power

By Barry Parker ager at MetalCraft Marine, with both U.S. and Canadian S. and Canadian owever readers might de? ne “normal”, k ld subsidiaries on the eastern fringes of Lake Ontario, told 2020 has been anything but. But the

Marine News, “It is hard to con? rm that the RIB market business of rigid in? atable boats (RIB) is recession-proof. We have not had a real recession in a has been going at full throttle.

Matthew Velluto, Director of Business Development long time, but based on 2020, it does seem to be pandem- and Marketing at RIBCRAFT USA, based in Marblehead, ic-proof.” Clark pointed to the importance of incentives

Mass., described a business moving steadily ahead, though from multiple layers of the government, saying, “If there is it’s had to weave and bob at times during 2020. “We’ve no COVID support money rolled out to the municipali- ties and states, there may be a drop in sales in those areas,” been able to stay open throughout 2020, with no disrup- adding, “However, the federal government hasn’t started tions on our side,” though he acknowledged hiccups fur- ther down in the company’s supply chain. He explains that with stimulus purchasing as yet.” But business has con- the business was deemed to be “essential”. RIBCRAFT, tinued. In late September, six months in to COVID-19 which serves military, ? rst responders and the leisure and disruptions, MetalCraft Marine US delivered two high yachting markets, produces only RIBs. Velluto said, “This performance 34-foot boats to the Department of Natural enables us to specialize, we don’t diversify the product line, Resources Police, in Mississippi. The boats, sporting triple as others do, but we diversify the markets that we serve.” Suzuki 300-horsepower outboard motors and capable of

The company builds boats ranging from 15 to 41 feet, reaching speeds of 64 miles per hour, will be used in the state’s bay areas along the coast, and out offshore, checking with rigid in? atables offering “incredible stability and abil- ity to carry heavy loads,” Velluto said, adding that “with on compliance by commercial and sport ? shing ? eets.

Todd Salus, vice president, sales and marketing for the in? atable collar, it gives you a fendering system that let’s you come up alongside boats…”, this being applicable Ocean Craft Marine, based in Annapolis, Md. described some concerns about business earlier in the year, but told for multiple uses including being deployed off a Navy ship.

When asked about whether the market for RIBs was Marine News, “2020 is shaping up to be a banner year for us,” adding that most of the professional business (law en- “recession-proof”, Bob Clark, who is the contracts man-