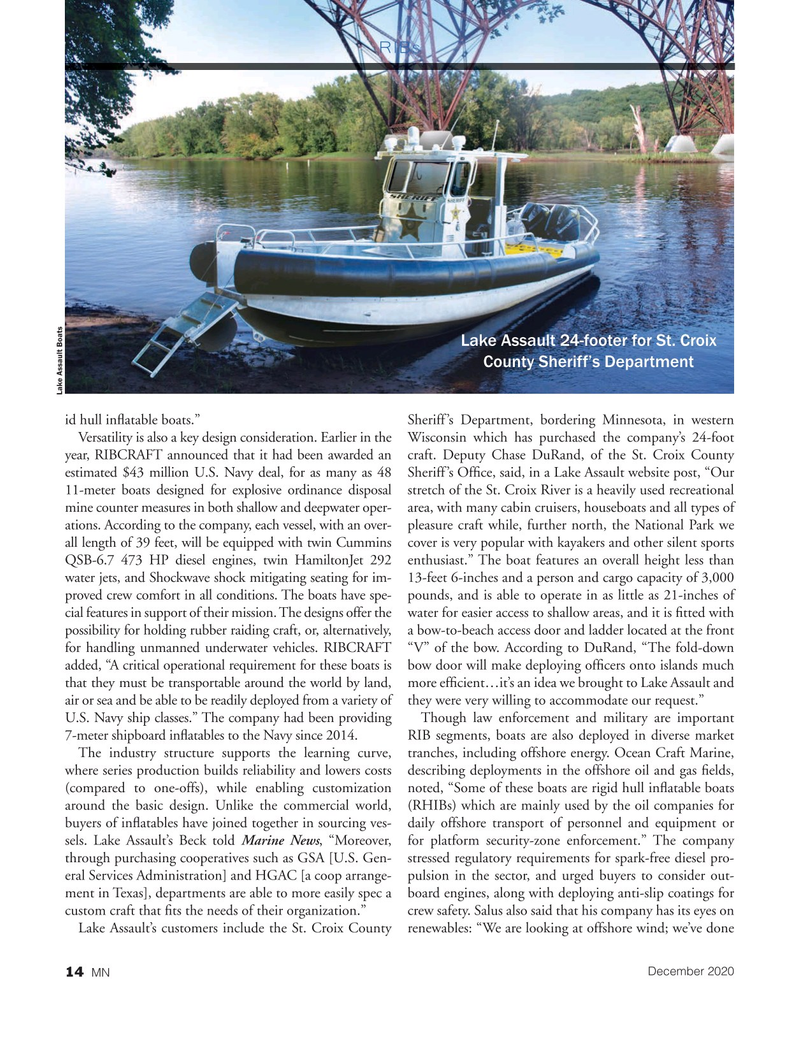 Versatility is also a key design consideration. Earlier in the Wisconsin which has purchased the company’s 24-foot year, RIBCRAFT announced that it had been awarded an craft. Deputy Chase DuRand, of the St. Croix County estimated $43 million U.S. Navy deal, for as many as 48 Sheriff’s Of? ce, said, in a Lake Assault website post, “Our 11-meter boats designed for explosive ordinance disposal stretch of the St. Croix River is a heavily used recreational mine counter measures in both shallow and deepwater oper- area, with many cabin cruisers, houseboats and all types of ations. According to the company, each vessel, with an over- pleasure craft while, further north, the National Park we all length of 39 feet, will be equipped with twin Cummins cover is very popular with kayakers and other silent sports

QSB-6.7 473 HP diesel engines, twin HamiltonJet 292 enthusiast.” The boat features an overall height less than water jets, and Shockwave shock mitigating seating for im- 13-feet 6-inches and a person and cargo capacity of 3,000 proved crew comfort in all conditions. The boats have spe- pounds, and is able to operate in as little as 21-inches of cial features in support of their mission. The designs offer the water for easier access to shallow areas, and it is ? tted with possibility for holding rubber raiding craft, or, alternatively, a bow-to-beach access door and ladder located at the front for handling unmanned underwater vehicles. RIBCRAFT “V” of the bow. According to DuRand, “The fold-down added, “A critical operational requirement for these boats is bow door will make deploying of? cers onto islands much that they must be transportable around the world by land, more ef? cient…it’s an idea we brought to Lake Assault and air or sea and be able to be readily deployed from a variety of they were very willing to accommodate our request.”

U.S. Navy ship classes.” The company had been providing Though law enforcement and military are important 7-meter shipboard in? atables to the Navy since 2014. RIB segments, boats are also deployed in diverse market

The industry structure supports the learning curve, tranches, including offshore energy. Ocean Craft Marine, where series production builds reliability and lowers costs describing deployments in the offshore oil and gas ? elds, (compared to one-offs), while enabling customization noted, “Some of these boats are rigid hull in? atable boats around the basic design. Unlike the commercial world, (RHIBs) which are mainly used by the oil companies for buyers of in? atables have joined together in sourcing ves- daily offshore transport of personnel and equipment or sels. Lake Assault’s Beck told Marine News, “Moreover, for platform security-zone enforcement.” The company through purchasing cooperatives such as GSA [U.S. Gen- stressed regulatory requirements for spark-free diesel pro- eral Services Administration] and HGAC [a coop arrange- pulsion in the sector, and urged buyers to consider out- ment in Texas], departments are able to more easily spec a board engines, along with deploying anti-slip coatings for custom craft that ? ts the needs of their organization.” crew safety. Salus also said that his company has its eyes on