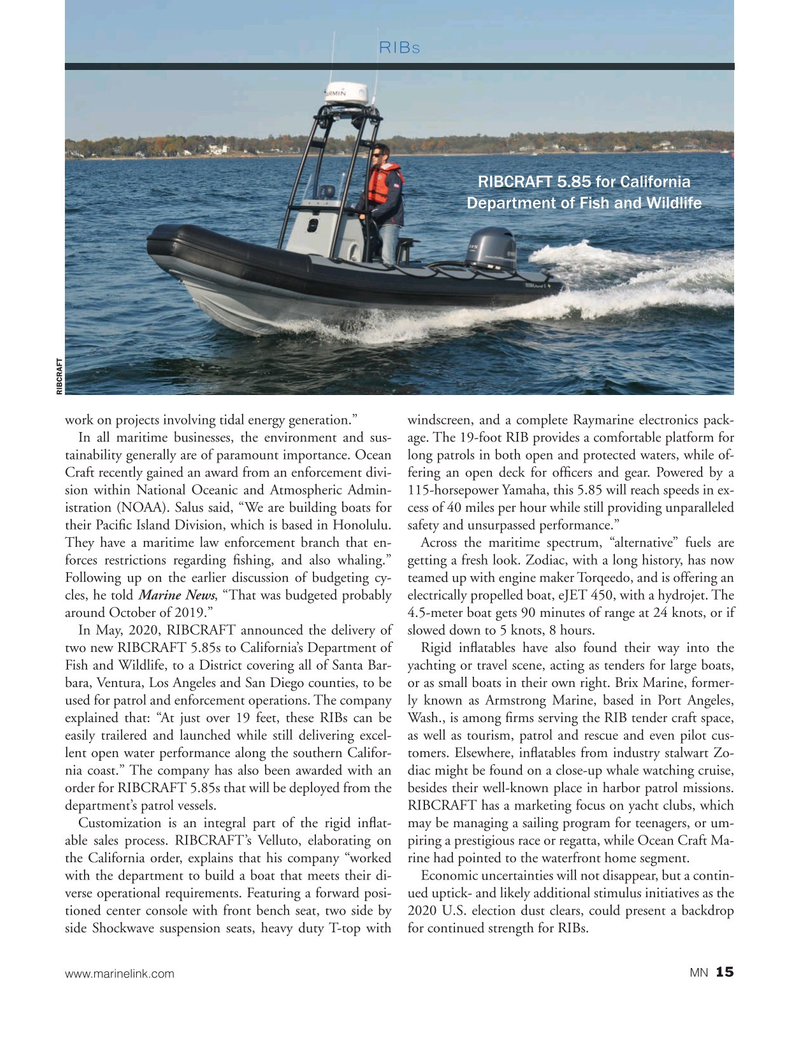 Department of Fish and Wildlife

In all maritime businesses, the environment and sus- age. The 19-foot RIB provides a comfortable platform for tainability generally are of paramount importance. Ocean long patrols in both open and protected waters, while of-

Craft recently gained an award from an enforcement divi- fering an open deck for of? cers and gear. Powered by a sion within National Oceanic and Atmospheric Admin- 115-horsepower Yamaha, this 5.85 will reach speeds in ex- istration (NOAA). Salus said, “We are building boats for cess of 40 miles per hour while still providing unparalleled their Paci? c Island Division, which is based in Honolulu. safety and unsurpassed performance.”

They have a maritime law enforcement branch that en- Across the maritime spectrum, “alternative” fuels are forces restrictions regarding ? shing, and also whaling.” getting a fresh look. Zodiac, with a long history, has now

Following up on the earlier discussion of budgeting cy- teamed up with engine maker Torqeedo, and is offering an cles, he told Marine News, “That was budgeted probably electrically propelled boat, eJET 450, with a hydrojet. The around October of 2019.” 4.5-meter boat gets 90 minutes of range at 24 knots, or if

In May, 2020, RIBCRAFT announced the delivery of slowed down to 5 knots, 8 hours. two new RIBCRAFT 5.85s to California’s Department of Rigid in? atables have also found their way into the

Fish and Wildlife, to a District covering all of Santa Bar- yachting or travel scene, acting as tenders for large boats, bara, Ventura, Los Angeles and San Diego counties, to be or as small boats in their own right. Brix Marine, former- used for patrol and enforcement operations. The company ly known as Armstrong Marine, based in Port Angeles, explained that: “At just over 19 feet, these RIBs can be Wash., is among ? rms serving the RIB tender craft space, easily trailered and launched while still delivering excel- as well as tourism, patrol and rescue and even pilot cus- lent open water performance along the southern Califor- tomers. Elsewhere, in? atables from industry stalwart Zo- nia coast.” The company has also been awarded with an diac might be found on a close-up whale watching cruise, order for RIBCRAFT 5.85s that will be deployed from the besides their well-known place in harbor patrol missions. department’s patrol vessels. RIBCRAFT has a marketing focus on yacht clubs, which

Customization is an integral part of the rigid in? at- may be managing a sailing program for teenagers, or um- able sales process. RIBCRAFT’s Velluto, elaborating on piring a prestigious race or regatta, while Ocean Craft Ma- the California order, explains that his company “worked rine had pointed to the waterfront home segment. with the department to build a boat that meets their di- Economic uncertainties will not disappear, but a contin- verse operational requirements. Featuring a forward posi- ued uptick- and likely additional stimulus initiatives as the tioned center console with front bench seat, two side by 2020 U.S. election dust clears, could present a backdrop side Shockwave suspension seats, heavy duty T-top with for continued strength for RIBs.