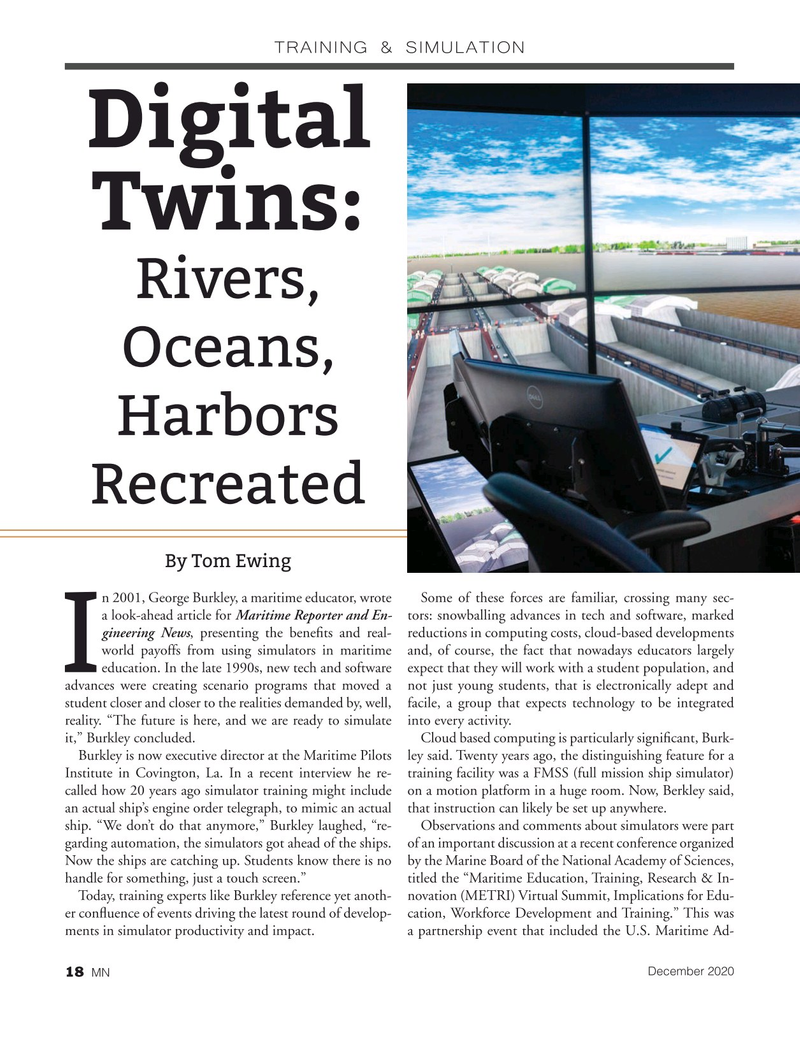 By Tom Ewing n 2001, George Burkley, a maritime educator, wrote Some of these forces are familiar, crossing many sec- a look-ahead article for Maritime Reporter and En- tors: snowballing advances in tech and software, marked gineering News, presenting the bene? ts and real- reductions in computing costs, cloud-based developments world payoffs from using simulators in maritime and, of course, the fact that nowadays educators largely education. In the late 1990s, new tech and software expect that they will work with a student population, and

I advances were creating scenario programs that moved a not just young students, that is electronically adept and student closer and closer to the realities demanded by, well, facile, a group that expects technology to be integrated reality. “The future is here, and we are ready to simulate into every activity.

Burkley is now executive director at the Maritime Pilots ley said. Twenty years ago, the distinguishing feature for a

Institute in Covington, La. In a recent interview he re- training facility was a FMSS (full mission ship simulator) called how 20 years ago simulator training might include on a motion platform in a huge room. Now, Berkley said, an actual ship’s engine order telegraph, to mimic an actual that instruction can likely be set up anywhere.

ship. “We don’t do that anymore,” Burkley laughed, “re- Observations and comments about simulators were part garding automation, the simulators got ahead of the ships. of an important discussion at a recent conference organized

Now the ships are catching up. Students know there is no by the Marine Board of the National Academy of Sciences, handle for something, just a touch screen.” titled the “Maritime Education, Training, Research & In-

Today, training experts like Burkley reference yet anoth- novation (METRI) Virtual Summit, Implications for Edu- er con? uence of events driving the latest round of develop- cation, Workforce Development and Training.” This was ments in simulator productivity and impact. a partnership event that included the U.S. Maritime Ad-