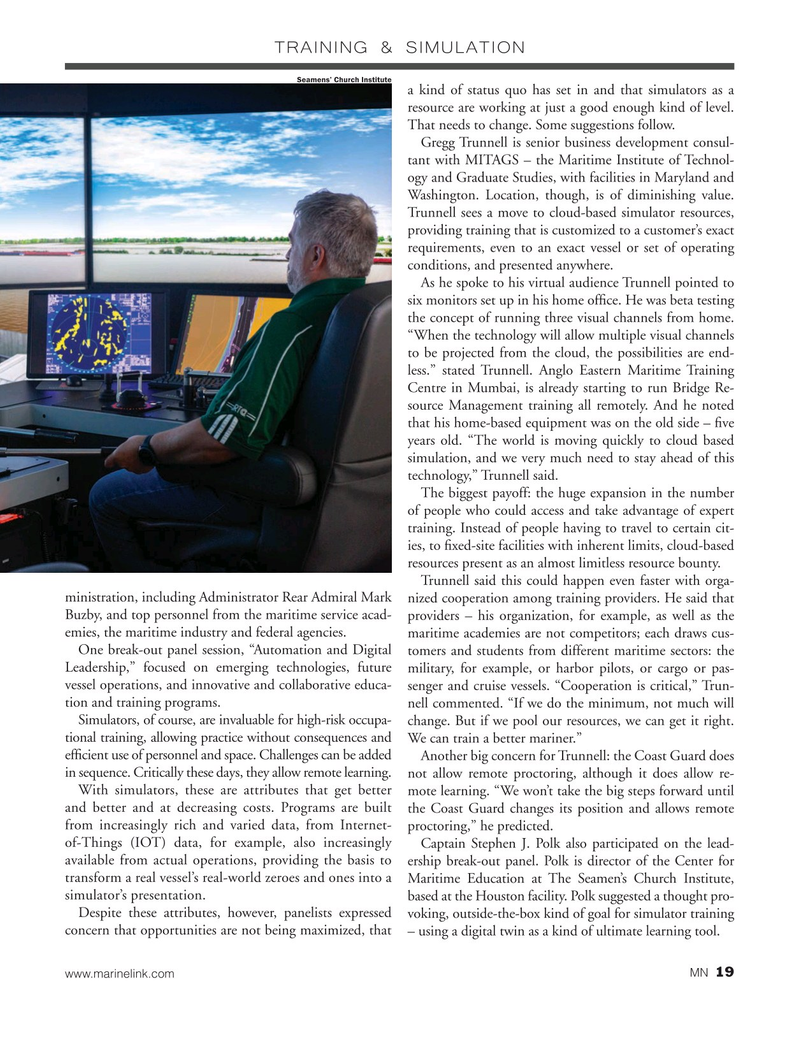 Seamens’ Church Institute a kind of status quo has set in and that simulators as a resource are working at just a good enough kind of level.

Gregg Trunnell is senior business development consul- tant with MITAGS – the Maritime Institute of Technol- ogy and Graduate Studies, with facilities in Maryland and

Washington. Location, though, is of diminishing value.

Trunnell sees a move to cloud-based simulator resources, providing training that is customized to a customer’s exact requirements, even to an exact vessel or set of operating conditions, and presented anywhere.

As he spoke to his virtual audience Trunnell pointed to six monitors set up in his home of? ce. He was beta testing the concept of running three visual channels from home. “When the technology will allow multiple visual channels to be projected from the cloud, the possibilities are end- less.” stated Trunnell. Anglo Eastern Maritime Training

Centre in Mumbai, is already starting to run Bridge Re- source Management training all remotely. And he noted that his home-based equipment was on the old side – ? ve years old. “The world is moving quickly to cloud based simulation, and we very much need to stay ahead of this technology,” Trunnell said.

The biggest payoff: the huge expansion in the number of people who could access and take advantage of expert training. Instead of people having to travel to certain cit- ies, to ? xed-site facilities with inherent limits, cloud-based resources present as an almost limitless resource bounty.

Trunnell said this could happen even faster with orga- ministration, including Administrator Rear Admiral Mark nized cooperation among training providers. He said that

Buzby, and top personnel from the maritime service acad- providers – his organization, for example, as well as the emies, the maritime industry and federal agencies. maritime academies are not competitors; each draws cus-

One break-out panel session, “Automation and Digital tomers and students from different maritime sectors: the

Leadership,” focused on emerging technologies, future military, for example, or harbor pilots, or cargo or pas- vessel operations, and innovative and collaborative educa- senger and cruise vessels. “Cooperation is critical,” Trun- tion and training programs. nell commented. “If we do the minimum, not much will

Simulators, of course, are invaluable for high-risk occupa- change. But if we pool our resources, we can get it right. tional training, allowing practice without consequences and We can train a better mariner.” ef? cient use of personnel and space. Challenges can be added Another big concern for Trunnell: the Coast Guard does in sequence. Critically these days, they allow remote learning. not allow remote proctoring, although it does allow re-

With simulators, these are attributes that get better mote learning. “We won’t take the big steps forward until and better and at decreasing costs. Programs are built the Coast Guard changes its position and allows remote from increasingly rich and varied data, from Internet- proctoring,” he predicted.

of-Things (IOT) data, for example, also increasingly Captain Stephen J. Polk also participated on the lead- available from actual operations, providing the basis to ership break-out panel. Polk is director of the Center for transform a real vessel’s real-world zeroes and ones into a Maritime Education at The Seamen’s Church Institute, simulator’s presentation. based at the Houston facility. Polk suggested a thought pro-

Despite these attributes, however, panelists expressed voking, outside-the-box kind of goal for simulator training concern that opportunities are not being maximized, that – using a digital twin as a kind of ultimate learning tool.