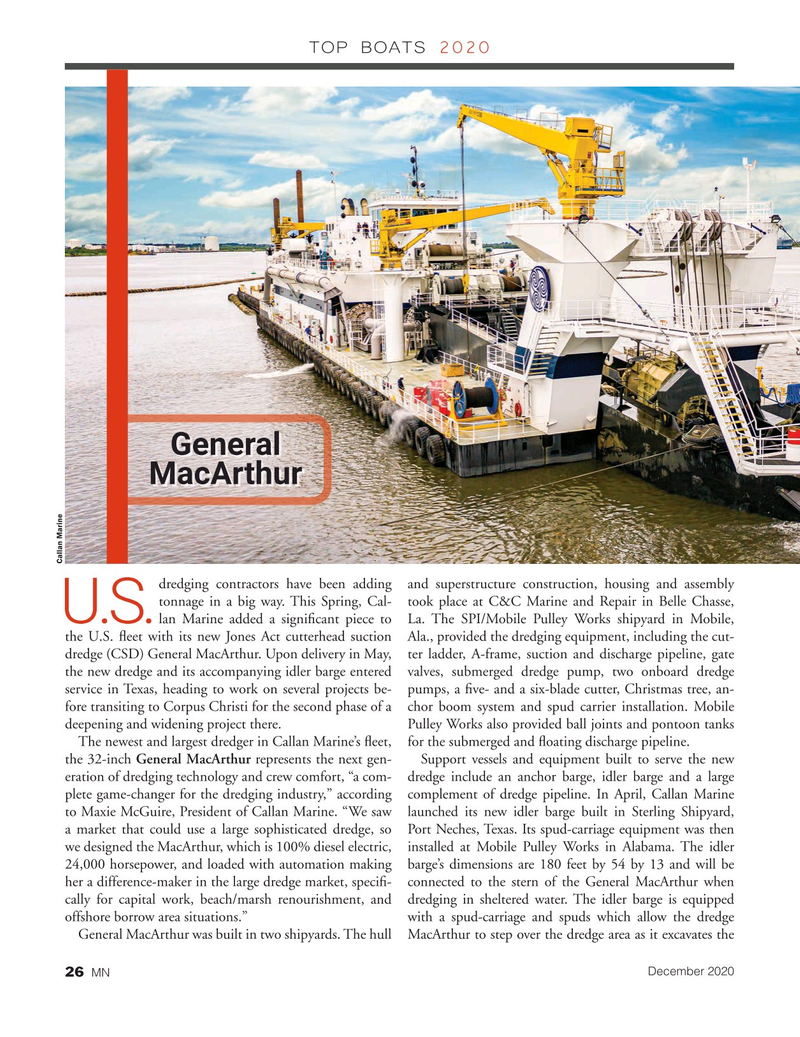 Callan Marine dredging contractors have been adding and superstructure construction, housing and assembly tonnage in a big way. This Spring, Cal- took place at C&C Marine and Repair in Belle Chasse,

U.S. lan Marine added a signi? cant piece to La. The SPI/Mobile Pulley Works shipyard in Mobile, the U.S. ? eet with its new Jones Act cutterhead suction Ala., provided the dredging equipment, including the cut- dredge (CSD) General MacArthur. Upon delivery in May, ter ladder, A-frame, suction and discharge pipeline, gate the new dredge and its accompanying idler barge entered valves, submerged dredge pump, two onboard dredge service in Texas, heading to work on several projects be- pumps, a ? ve- and a six-blade cutter, Christmas tree, an- fore transiting to Corpus Christi for the second phase of a chor boom system and spud carrier installation. Mobile deepening and widening project there. Pulley Works also provided ball joints and pontoon tanks

The newest and largest dredger in Callan Marine’s ? eet, for the submerged and ? oating discharge pipeline.

the 32-inch General MacArthur represents the next gen- Support vessels and equipment built to serve the new eration of dredging technology and crew comfort, “a com- dredge include an anchor barge, idler barge and a large plete game-changer for the dredging industry,” according complement of dredge pipeline. In April, Callan Marine to Maxie McGuire, President of Callan Marine. “We saw launched its new idler barge built in Sterling Shipyard, a market that could use a large sophisticated dredge, so Port Neches, Texas. Its spud-carriage equipment was then we designed the MacArthur, which is 100% diesel electric, installed at Mobile Pulley Works in Alabama. The idler 24,000 horsepower, and loaded with automation making barge’s dimensions are 180 feet by 54 by 13 and will be her a difference-maker in the large dredge market, speci? - connected to the stern of the General MacArthur when cally for capital work, beach/marsh renourishment, and dredging in sheltered water. The idler barge is equipped offshore borrow area situations.” with a spud-carriage and spuds which allow the dredge

General MacArthur was built in two shipyards. The hull MacArthur to step over the dredge area as it excavates the