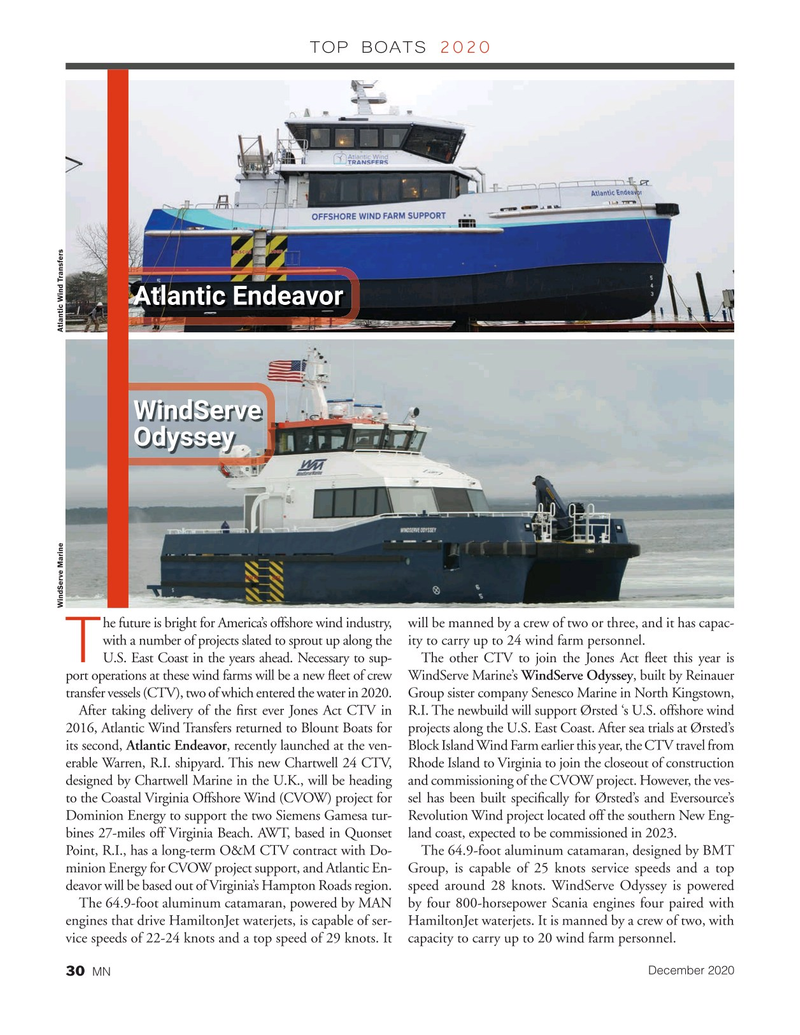 WindServe Marine Atlantic Wind Transfers he future is bright for America’s offshore wind industry, will be manned by a crew of two or three, and it has capac- with a number of projects slated to sprout up along the ity to carry up to 24 wind farm personnel.

U.S. East Coast in the years ahead. Necessary to sup- The other CTV to join the Jones Act ? eet this year is port operations at these wind farms will be a new ? eet of crew WindServe Marine’s WindServe Odyssey, built by Reinauer transfer vessels (CTV), two of which entered the water in 2020. Group sister company Senesco Marine in North Kingstown,

After taking delivery of the ? rst ever Jones Act CTV in R.I. The newbuild will support Ørsted ‘s U.S. offshore wind 2016, Atlantic Wind Transfers returned to Blount Boats for projects along the U.S. East Coast. After sea trials at Ørsted’s its second, Atlantic Endeavor, recently launched at the ven- Block Island Wind Farm earlier this year, the CTV travel from erable Warren, R.I. shipyard. This new Chartwell 24 CTV, Rhode Island to Virginia to join the closeout of construction designed by Chartwell Marine in the U.K., will be heading and commissioning of the CVOW project. However, the ves- to the Coastal Virginia Offshore Wind (CVOW) project for sel has been built speci? cally for Ørsted’s and Eversource’s

Point, R.I., has a long-term O&M CTV contract with Do- The 64.9-foot aluminum catamaran, designed by BMT minion Energy for CVOW project support, and Atlantic En- Group, is capable of 25 knots service speeds and a top deavor will be based out of Virginia’s Hampton Roads region. speed around 28 knots. WindServe Odyssey is powered

The 64.9-foot aluminum catamaran, powered by MAN by four 800-horsepower Scania engines four paired with engines that drive HamiltonJet waterjets, is capable of ser- HamiltonJet waterjets. It is manned by a crew of two, with vice speeds of 22-24 knots and a top speed of 29 knots. It capacity to carry up to 20 wind farm personnel.