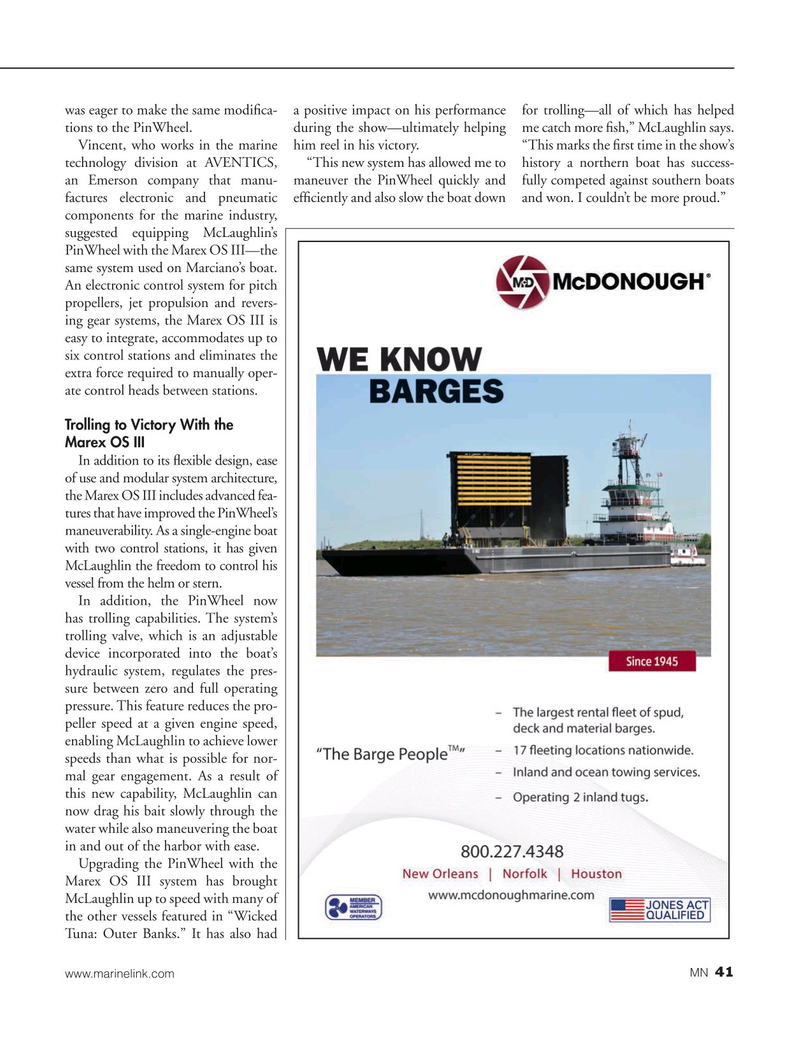 was eager to make the same modi? ca- a positive impact on his performance for trolling—all of which has helped tions to the PinWheel. during the show—ultimately helping me catch more ? sh,” McLaughlin says.

Vincent, who works in the marine him reel in his victory. “This marks the ? rst time in the show’s technology division at AVENTICS, “This new system has allowed me to history a northern boat has success- an Emerson company that manu- maneuver the PinWheel quickly and fully competed against southern boats factures electronic and pneumatic ef? ciently and also slow the boat down and won. I couldn’t be more proud.” components for the marine industry, suggested equipping McLaughlin’s

Trolling to Victory With the

In addition to its ? exible design, ease of use and modular system architecture, the Marex OS III includes advanced fea- tures that have improved the PinWheel’s maneuverability. As a single-engine boat with two control stations, it has given

McLaughlin the freedom to control his vessel from the helm or stern.

In addition, the PinWheel now has trolling capabilities. The system’s trolling valve, which is an adjustable device incorporated into the boat’s hydraulic system, regulates the pres- sure between zero and full operating pressure. This feature reduces the pro- peller speed at a given engine speed, enabling McLaughlin to achieve lower speeds than what is possible for nor- mal gear engagement. As a result of this new capability, McLaughlin can now drag his bait slowly through the water while also maneuvering the boat in and out of the harbor with ease.

Upgrading the PinWheel with the

Tuna: Outer Banks.” It has also had 41 www.marinelink.com MN