Makai Ocean Engineering received a $3.6 million contract from the Hawaii Natural Energy Institute and the Office of Naval Research for research and design on the marine renewable energy known as Ocean Thermal Energy Conversion, or OTEC. Makai will perform this work at their Ocean Energy Research Center, located in Kona, Hawaii.
The promise of OTEC lies in the fact that tropical ocean is earth’s largest solar collector. According to Dr. Joseph Huang, a senior scientist at the U.S. National Oceanic and Atmospheric Administration, “If we can use one percent of the energy [generated by OTEC] for electricity and other things, the potential is so big. It is more than 100 to 1,000 times more than the current consumption of worldwide energy. The potential is huge. There is not any other renewable energy that can compare with OTEC.” Makai will work on two initiatives to serve the ultimate goal of making commercial OTEC a reality:
•    Designing, manufacturing and testing an improved heat exchanger for OTEC, and
•    Connecting power from its OTEC plant to the electric grid on the Island of Hawaii
Because heat exchangers make up about one-third of the cost of an OTEC plant, Makai will develop designs for an OTEC heat exchanger that is high-performance, low-cost, and corrosion-resistant. The goal is a product that is essential to developers of OTEC and valuable for other industries that use marine heat exchangers.
In addition, Makai will install a 100-kilowatt turbine at the Ocean Energy Research Center to generate OTEC power onto the local grid in mid-2014. This turbine will make Makai’s Ocean Energy Research Center the largest operational OTEC plant in the world, and the first closed-cycle OTEC plant ever connected to a U.S. electrical grid. By operating the OTEC plant, Makai will gain operational knowledge that will aid in the design of future utility-scale power plants.


(As published in the November/December 2013 edition of Marine Technology Reporter - www.seadiscovery.com) 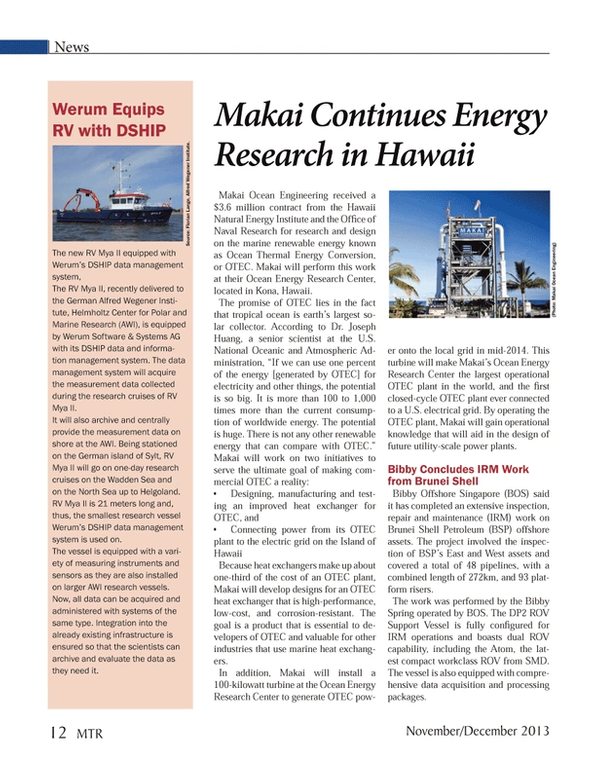