ROV Put to the Test

While the maritime environment is generally regarded as one of the most harsh on earth, it could be argued that outside of the respective poles, the North Sea presents one of the harshest environments for all things maritime and subsea. With that as a backdrop, consider that a VideoRay Pro 4 Remotely Operated Vehicle (ROV) spent 19 months operating continuously in the North Sea, in what is believed to be the longest uninterrupted deployment of a single ROV of any class, according to the company

Put to the Test
The operation began in November 2013 as an experimental emergency preparedness solution for Stinger Technology AS, a subsea services provider for the offshore oil & gas sector. The Pro 4 “resident ROV” was deployed off the coast of Stavanger, Norway, but operated mainly from Stinger’s offices which are located nearly 250 meters inland. The ROV remained powered on and in full operating condition for the entire duration of the deployment. Before Stinger voluntarily ended the ROV’s deployment on May 20, 2015, the submersible had not surfaced for repairs or even routine maintenance.

“Originally, we anticipated it would last about three months,” said Stinger CEO Bjarte Langeland. “But the Pro 4’s endurance has obviously significantly outlasted any of our expectations.”

The goal for Stinger’s resident ROV project was to test the system’s limits, determine the implications of long-term continuous use underwater, and ultimately to prove the Pro 4 ROV as an extended or resident emergency preparedness solution.

The resident ROV could begin an inspection immediately after being called into action, thanks to its “home” position on the seafloor. Having an on-call ROV system can significantly reduce the time and resources needed for an ROV operation, especially in emergency situations.

Stinger also wanted to test the use of a resident ROV to monitor methane gas buildup, which pose a threat to offshore oil & gas operations. If left undetected, gas buildups can cause explosions, resulting in costly and even fatal damages to wells, platforms and the environment. These buildups are especially of critical concern in Norway, where methane levels have risen drastically over the last 10 years due to melting permafrost and seepage from under the Arctic seafloor.

“While the ROV is a ‘remotely operated’ vehicle, standard operations require the pilot to stay fairly close to the system,” said Langeland. “Our resident ROV project investigates how we can further remove the pilot from the physical ROV deployment, making it possible to involve multiple experts in real-time operations.”

Remote Control
The resident ROV was mostly operated remotely over a WiFi network, instead of directly from the Pro 4 Integrated Control Box (ICB). All the standard Pro 4 equipment – submersible, ICB, and tether – was still deployed as usual, but the ROV could be piloted from locations other than the deployment site. This allowed Stinger to operate the Pro 4 from their headquarters immediately, rather than waiting until they could get a pilot onsite.

“Eliminating the need for the operator to be physically near the surface unit for our ROVs has been a long term goal at VideoRay” said Scott Bentley, VideoRay’s founder and CEO.  “Stinger’s innovation here is extremely impressive, and we are proud to partner with them on this project.”

Stinger has used VideoRay ROVs since 2010.

One of the biggest challenges of distance piloting operations is maintenance. Standard preventive maintenance practices and visual inspections require the ROV to be recovered in between operations so the pilot can identify any potential issues, conduct necessary repairs, and replace any damaged or consumable parts. In lieu of standard procedures, Stinger developed new methods of maintaining the system without surfacing. The resident ROV was housed in a crate on the seafloor, which helped reduce the amount of biofouling that the ROV might experience through natural wear and tear of being underwater. It also kept out any predators who may be too aggressively curious about its new neighbor in the North Sea. Every few days, a pilot “spun” the ROV’s thrusters to dislodge any debris that may have settled since its last deployment. Stinger also used a second Pro 4 ROV to monitor and visually inspect the resident ROV on a regular basis.

Several standard Pro 4 features lend themselves well to the successful distance piloting of the resident ROV. The VideoRay Pro 4 Cockpit control software includes several health status monitors that detect and alert the pilot to any internal malfunctions, such as leaks, overheating, or lost communications. Cockpit also features an extensive interactive engine room where pilots can monitor the status of the thrusters, power supply and compass calibration. Other Cockpit features, such as auto-heading and auto-depth, dynamic compass and depth gauge, and tether turn counter, make it possible to keep track of the resident ROV’s position at all times.

Although the ROV was always powered on, it was only in flight when needed. This helped conserve consumable parts, especially the cartridge seals which lubricate the thrusters.

Once the submersible was surfaced, Stinger completed a thorough evaluation of every component, from small screws to internal electronics. Though they observed some surface growth, minor corrosion, and salt accumulation on some of the hardware, every piece was still in working condition after spending nearly 14,000 hours in the North Sea.

Although Stinger is the first VideoRay customer to use remote wireless deployment in a commercial context, VideoRay has been experimenting with this idea for more than a decade. VideoRay’s first foray into remote wireless deployment was at the VideoRay International Partners Symposium (VIPS) in 2004 with a Pro 3 ROV using PC Pilot, the predecessors to the Pro 4 and VideoRay Cockpit. The ROV was deployed in Key Largo, Fla., but could be piloted in real-time over the Internet by operators from Exton, Pennsylvania – 1,250 miles away. Other examples of remote VideoRay piloting include the Mini Habitat Adventure program at Marine Lab in Key Largo, and a 2008 promotion for Foster’s Beer in the United Kingdom where participants around the world could control the ROV from their own PCs.

“The wireless piloting set-up we used in 2004 was nowhere near as sophisticated as the Stinger system,” said Bentley. “However, the use of the PC Pilot control software instead of a built-in joystick did help determine the direction for our next generation of technology, the Pro 4. Similarly, Stinger’s innovative approach to resident ROV installation and remote wireless piloting will help inform the next generation of our technology and open doors for the rest of our users as they find new ways to implement VideoRay technology for faster, safer, and more cost-efficient operations.” 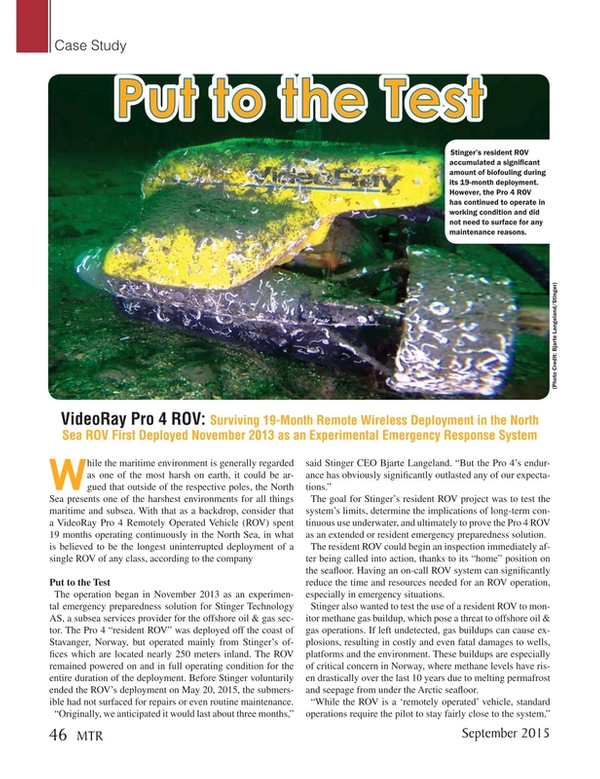 Read ROV Put to the Test in Pdf, Flash or Html5 edition of September 2015 Marine Technology