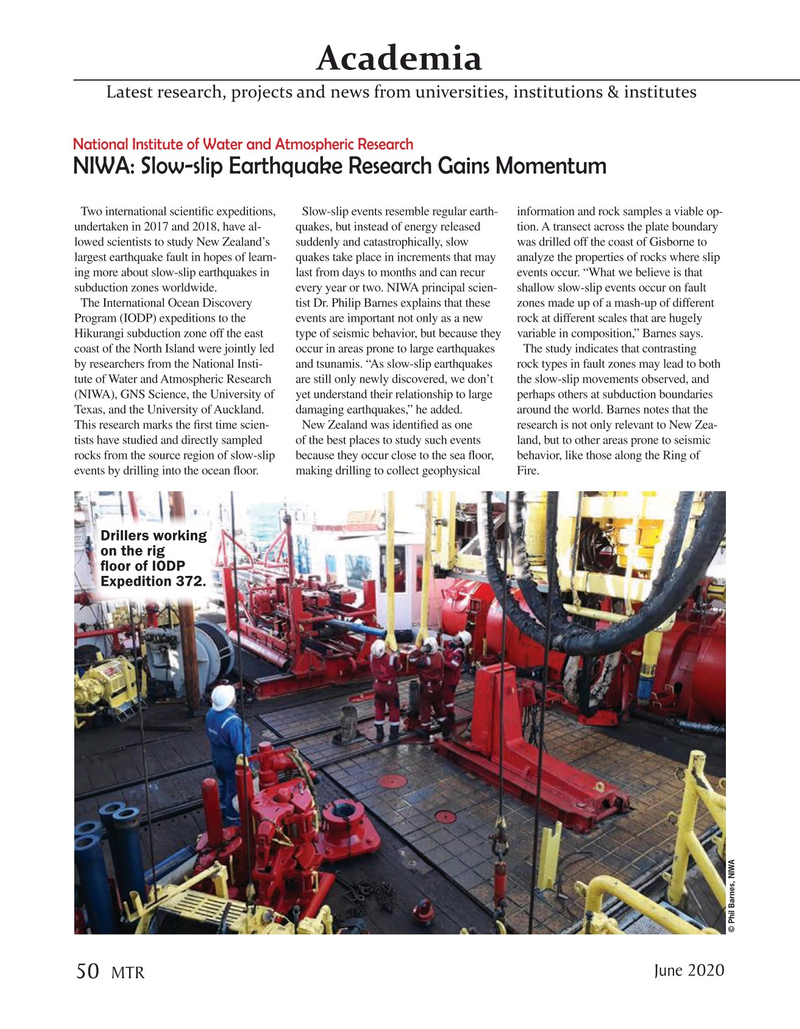 Two international scientifc expeditions, Slow-slip events resemble regular earth- information and rock samples a viable op- undertaken in 2017 and 2018, have al- quakes, but instead of energy released tion. A transect across the plate boundary lowed scientists to study New Zealand’s suddenly and catastrophically, slow was drilled off the coast of Gisborne to largest earthquake fault in hopes of learn- quakes take place in increments that may analyze the properties of rocks where slip ing more about slow-slip earthquakes in last from days to months and can recur events occur. “What we believe is that subduction zones worldwide. every year or two. NIWA principal scien- shallow slow-slip events occur on fault

The International Ocean Discovery tist Dr. Philip Barnes explains that these zones made up of a mash-up of different

Hikurangi subduction zone off the east type of seismic behavior, but because they variable in composition,” Barnes says. coast of the North Island were jointly led occur in areas prone to large earthquakes The study indicates that contrasting by researchers from the National Insti- and tsunamis. “As slow-slip earthquakes rock types in fault zones may lead to both tute of Water and Atmospheric Research are still only newly discovered, we don’t the slow-slip movements observed, and (NIWA), GNS Science, the University of yet understand their relationship to large perhaps others at subduction boundaries

Texas, and the University of Auckland. damaging earthquakes,” he added. around the world. Barnes notes that the

This research marks the frst time scien- New Zealand was identifed as one research is not only relevant to New Zea- tists have studied and directly sampled of the best places to study such events land, but to other areas prone to seismic rocks from the source region of slow-slip because they occur close to the sea foor, behavior, like those along the Ring of events by drilling into the ocean foor. making drilling to collect geophysical Fire.

Drillers working on the rig foor of IODP