Today’s red hot maritime markets – especially on this side of the pond – are being fueled by a super-charged combination of domestic energy production, an increase in the number of hulls being turned out by the nation’s shipyards, and robust salary structures. Those variables are also driving an insatiable thirst for qualified maritime professionals and licensed mariners, in particular. Hence, it should come as no surprise that America’s maritime academies are experiencing boom times, record enrollments, and – something you won’t see in the graph to the right – a marked increase in the number of students migrating back to the license track curricula. The most telling statistic, perhaps, is the 1,593 graduates who stepped out into the work place from the class of 2013. That number is up 307 students from just six years ago, or a whopping 24 percent. Beyond this, it represents a headcount leap of 160 or 11 percent more than the running six year average. But that’s only half the story.
At the Massachusetts Maritime Academy, today’s incoming frosh and rising sophomore classes are not only larger than ever before, but both are also much more heavily weighted towards the license-track program. Indeed, 64 percent of these students are choosing the license track versus a six year average of just 44 percent at the storied academy. Those robust rebounding numbers, although a far cry from the school’s almost 100 percent license track numbers from the 1980’s, reflect the demand for mariners everywhere. And, although the 2014 graduation numbers were not yet being released as we went to press, the trend can be seen across the full breadth of the nation’s maritime training institutions. Also not reflected in the table above is Mass. Maritime’s total regiment numbers for the coming school year. Topping out at almost 1,400 students, the numbers produce an average class size of 350, of which 224 graduates annually will potentially walk up a gangway just weeks after graduation. In fact, four of the seven schools recorded record high graduation numbers in 2013, and all reached their high water marks within the last two years.
But, the positive trending brings with it another sea bag full of problems. The state maritime academies in particular are bursting at the seams, but also struggling to keep up with the unrelenting introduction of still more in the way of STCW training requirements that heap as much as an additional semester of requirements on the backs of cadets – all of which is still being crammed into a traditional four-year academic calendar. MMA Dean of students Brad Lima told MarPro in July, “We are already running 11+ months per year. The coming additional requirements will require us to rethink how we can package the training.” Moreover, it cost as much as 25 percent more to educate a license track cadet, when the cost of a training cruise and STCW training is thrown in. Still, that’s good value in today’s spiraling education costs where a $100,000 MMA education immediately translates in a $70,000 job for fully 97 percent of its graduates. For example, at MMA, as much as 25% of each graduating class is typically offered employment through the Military Sealift Command – now one of the nation’s largest employers of merchant seamen. And the other schools? They boast similar metrics. In fact, the license programs are becoming so popular that Mass. Maritime is considering a “cap” to the number of students it can accommodate in the license track, and at least one other academy has already made the move.
Good times indeed, for schools, some of which, that just 15 years ago were teetering on the brink of extinction as the U.S. merchant marine looked to be dying a similar, slow and lingering death in an increasing global world. But, today’s license track cadets face significant pressure in trying to complete both a degree and obtain a license in just four years. At Mass. Maritime, the Marine Transportation (Deck) majors are the least likely (just 40%) to have all of their requirements completed on the day these heave that hat into the air. Brad Lima adds, “The STCW assessment is now more stringent than the academic standards.”
Traditionally, the United States has front-end loaded education for their cadets and augmented that later with training and sea time. Across the pond and beyond, training and sea time was front loaded, with class work taken afterwards. For U.S. maritime academies, and with the increasingly time-consuming STCW training, the handwriting is on the wall – they’ll have to move in the direction of the international training schemes to keep up.
And that doesn’t even include the so-called dynamic-positioning (DP) certifications, where at this time, simply too many gray areas color the myriad standards and protocols. At the end of the day, laments Lima, “No one has yet demonstrated that STCW has added value and/or safety with the extra training being required.”
All challenges aside, we asked Dean Lima for his assessment of the current situation and an estimate of  how long the ‘boom’ time could last – at least at the academies themselves. For his part, Lima insists, “For the next dozen years, the prospects look very good.” He cited attrition from a graying workforce and the uncertainty represented by far more stringent U.S. Coast Guard medical standards that are now being applied at two year intervals, instead of the traditional five. Add in the ongoing domestic energy boom and it’s not too hard to join Lima in his optimism. That’s because, as the market changed and demanded products, the academies delivered. Stay tuned for what comes next. 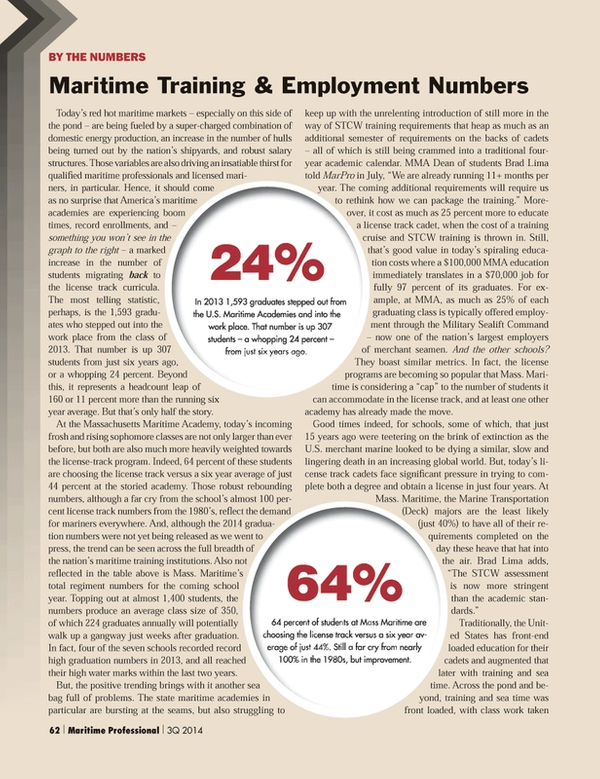