Nobody Rides for Free …

Emissions-compliant fuel and strategies: the decision may ultimately be out of your hands.

The International Maritime Organization (IMO) and Environmental Protection Agency (EPA) emission regulations requiring a reduction in sulfur within the Emission Control Areas may bring more to your operation than cleaner air. That said; don’t expect to breathe easier after January 1, 2015. That’s because you will have a multitude of decisions to make within your fleet to comply with the regulations and they go well beyond a choice of what fuel to burn. Where and how you trade will affect your technical path forward. If that sounds complicated, then you will also find yourself in good company as you move forward with ‘a bone in your teeth’ (or maybe not).

Looking Ahead: act locally, think globally
The impending process will entail analysis of the future cost of energy within the United States or for that matter globally. It will affect the maintenance of your engines, your bunker logistics, and the speed at which your fleet operates. All of which will affect the profitability of your company. The way we see it, the decision-makers will be the energy producers, refiners and traders. Your future fuel goes well beyond transportation.
LNG has been in the lead as the “future fuel” needed to meet the new emissions requirements. Approximately 50 vessels have been delivered and another 55 to 60 are under construction with the intent to use natural gas as their primary propulsion fuel. But many of those vessels and future deliveries are actually vessels built to trade and carry LNG making the propulsion decision much easier than the surrounding market sectors.
The industry continues to debate the delay of the LNG infrastructure needed to support the propulsion change to gas. Trading LNG as a cargo was originally contracted to support the import of LNG into the United States. The 2013/2014 Far East ordering boom is now based upon the United States’ ability to export LNG after 2016. That change has affected natural gas pricing worldwide along with jeopardizing gas field development in Australia and east Africa. The U.S. influence will continue to affect seaborne transportation of LNG, with most predictions showing a move away from historic long term charters and into short term tramp trading. Still others believe that development will help to build the required gas infrastructure needed for the fuel change. Others believe we got it wrong the first time and are more than capable of getting it wrong again as more cost effective means of capturing the gas at the well head are developed.
Those economic concerns have delayed the gas propulsion application and the build out of the bunkering infrastructure required in both ECA locations – Europe and the United States. Unfortunately we are still dealing with the proverbial “chicken and the egg” and at this point it may still be years before the questions become answers. We would hope not as the continued delay in determining a path forward affects many of us in the industry who spend our days on the deck plates.

Methanol in the Mix
The next round of discussion brings “liquid gas” or methanol to the table.  Clean as natural gas (though containing fewer BTU’s), methanol does not contain sulfur, is bio-diversified, can be created from renewable and non-renewable feed stocks such as sugar cane, corn and other agricultural products and is more cost effective than the application of liquefied natural gas. The fuel is widely available and safely transported within an existing infrastructure. For those who would like to wave the “green flag” even higher, the fuel can be produced by recycling CO2 through flue gas emissions or by utilizing “captured” CO2 placed into storage. Plug that into your EEDI or company’s greenhouse gas targets and the fuel looks like it answers all of the questions raised.
With minor modification to existing bunker tanks and underdeck storage, methanol or “liquid gas” does not have the refrigeration requirements associated with the use of LNG. Ship modifications and engine modifications needed to use the fuel are much less restrictive and far less expensive. Most of the major engine manufacturers are moving forward with test bed engines to look at this liquid gas change. MAN B&W entered the test bed in July of 2013 with the development of the ME-LGI dual fuel engine for a sister company of Methanex, the world’s largest producer of methanol. Following a similar path to LNG, the engine manufacturer has watched the recent boom in LPG ship construction and targeted this sector as the first available customer to use the fuel. MAN B&W hopes to achieve Tier III compliance with the ME liquid gas engine as testing progresses.

Ask the Right Question
We find the more important detail of the “which fuel to burn?” question to be “should the fuel change occur now?” Many of the major engine manufacturers believe that heavy fuel oil (HFO) will remain as a large segment of the bunker market and LNG will find its niche. The “half pregnant” two stroke engines preparing for gas are an economically viable option and provide some media attention. However, the full ship designs typically neglect to fully address the most expensive part of the installation – the storage and delivery of the gas.
In smaller engine applications in the ECAs and for international vessels entering the IMO locations for limited periods of time, we have recommended the use of ultra-low sulfur MDO and MGO. Unfortunately, we are discovering that the change to these lighter fuels is not going as smoothly as hoped – or, for that matter, as predicted. The low sulfur fuel options in Europe and the U.S. look to have large amounts of “Cat Fines” and very low viscosity. Allowing the fuel to settle and paying strict attention to purification protocols on board are both now unavoidable and necessary procedures. Many of the latest internal corrosion issues, accelerated wear patterns associated with slow steaming and low load operations are now being tagged as a result of burning low sulfur fuels. Extended ignition delays and the fuel’s capability to produce a slow burn also affect engine efficiency and maintenance.
It is also true that the marine industry today is going through the same issues that NASCAR and really, the general automotive business, went through in the 1970’s, when the lead was removed from gasoline. It seems that lead and sulfur both do the same thing – provide lubricity and its removal causes big problems in both cases. Beyond this, today’s shipboard marine engineers either haven’t quite gotten the hang of switching from heavy fuel to distillates when entering ECA’s or perhaps the differences between the two fuels is partly to blame. In any event, one need only look to the great state of California where regulations have long mandated the switch to low sulfur distillates when within the state’s waters. The number of loss of propulsion (LOP) incidents there is well documented and these ‘events’ occur often enough to be, as a minimum, alarming.

Who’s in the Driver’s Seat?
A long hard look at the problems that the maritime industry is collectively facing in making this fuel decision raises the fact that the industry spent many long hours and dollars modifying historic marine diesel engines to burn heavy fuels. The refineries were grateful for the effort as it provided an outlet for them to sell the “remains” produced by cracking and manufacturing light end distillates. A recent development at Exxon/Mobil in Europe may indicate that the major oil companies and refineries are not ready to toss away that business.
Exxon has developed a premium HFO fuel named HDME 50, available in the heart of the European ECA – Amsterdam, Rotterdam and Antwerp. The product is a heavy fuel, with less than .10% sulfur content and capable of meeting the January 1, 2015 IMO emissions requirements. Add this fuel to your quiver and your decision process becomes only a selection of SCR and EGR costs to comply with the next set of NOx reduction requirements.
As a heavy fuel base, this product does not have the viscosity issues associated with the lighter low sulfur distillates, reduces the risk of thermal shock associated with the fuel change from 3.5% sulfur to the .10% ultra-low sulfur fuels, can be utilized in auxiliary engines and boilers and has not received “objection letters” from MAN B&W. We see many operators trading in Europe now moving towards this new product.
The development adds another unanswered question: will Exxon make the fuel available in other bunkering locations? The answer to that question reverts back to the title of this article: “No One rides for free.” As much as the answers may look to be regulation and/or emissions-based, it always comes back to cost, market and profit. Whether it is Gas, HFO or Distillate, the future of environmentally sustainable propulsion will surely be ultimately determined by the producers of energy. 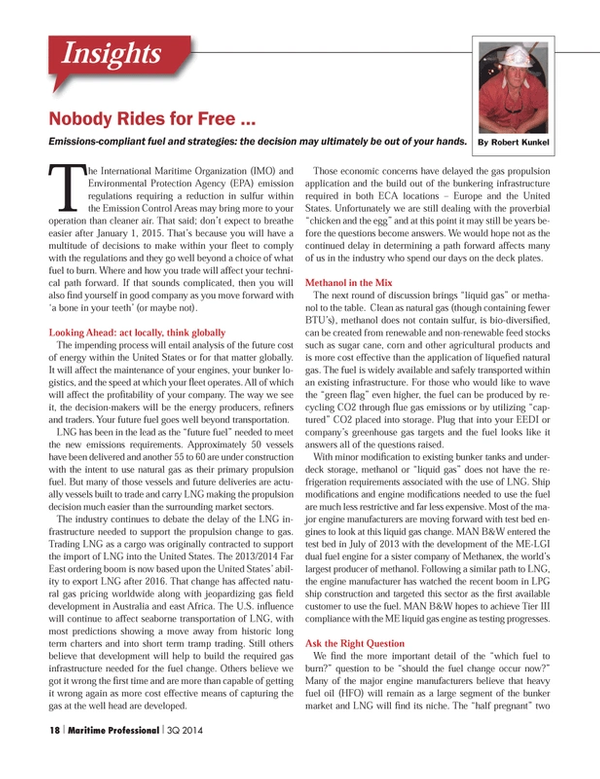 Read Nobody Rides for Free … in Pdf, Flash or Html5 edition of Q3 2014 Maritime Logistics Professional