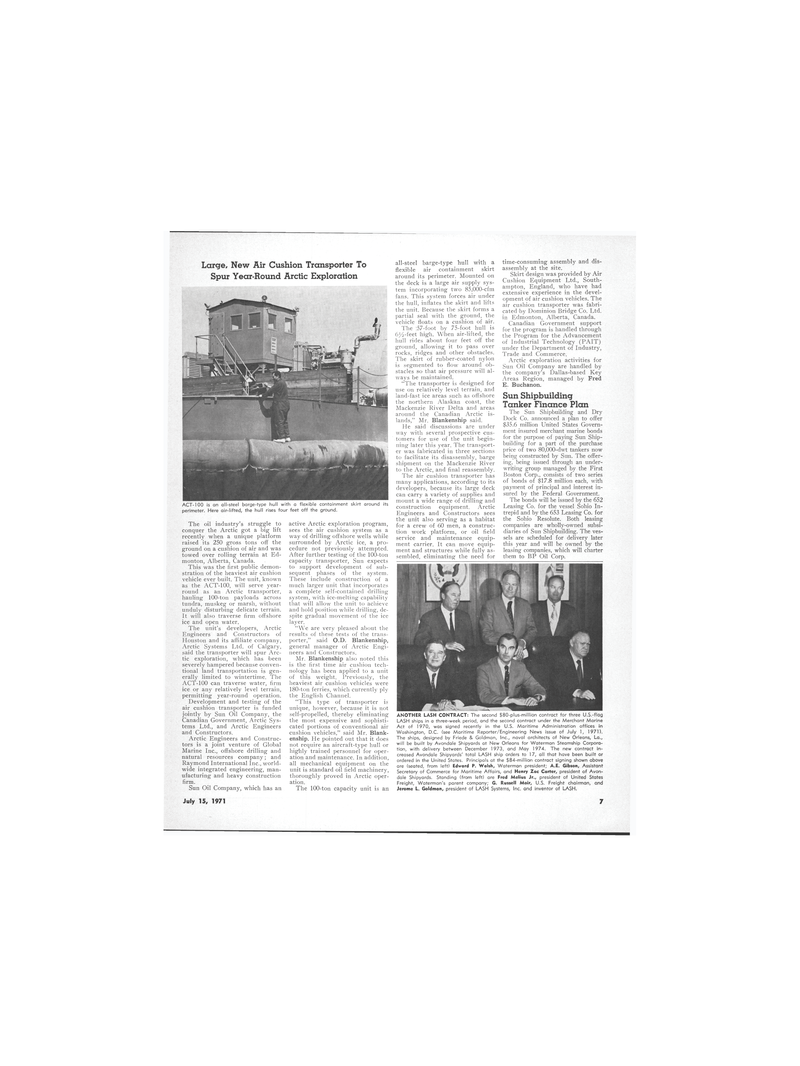 ACT-100 is an all-steel barge-type hull with a flexible containment skirt around its perimeter. Here air-lifted, the hull rises four feet off the ground.

The oil industry's struggle to conquer the Arctic got a big lift recently when a unique platform raised its 250 gross tons off the ground on a cushion of air and was towed over rolling terrain at Ed- monton, Alberta, Canada.

This was the first public demon- stration of the heaviest air cushion vehicle ever built. The unit, known as the ACT-100, will serve year- round as an Arctic transporter, hauling 100-ton payloads across tundra, muskeg or marsh, without unduly disturbing delicate terrain.

It will also traverse firm offshore ice and open water.

Engineers and Constructors of

Houston and its affiliate company,

Arctic Systems Ltd. of Calgary, said the transporter will spur Arc- tic exploration, which has been severely hampered because conven- tional land transportation is gen- erally limited to wintertime. The

Development and testing of the air cushion transporter is funded jointly by Sun Oil Company, the

Arctic Engineers and Construc- tors is a joint venture of Global

Sun Oil Company, which has an active Arctic exploration program, sees the air cushion system as a way of drilling offshore wells while surrounded by Arctic ice, a pro- cedure not previously attempted.

After further testing of the 100-ton capacity transporter, Sun expects to support development of sub- sequent phases of the system.

These include construction of a much larger unit that incorporates a complete self-contained drilling system, with ice-melting capability that will allow the unit to achieve and hold position while drilling, de- spite gradual movement of the ice layer. "We are very pleased about the results of these tests of the trans- porter," said O.D. Blankenship, general manager of Arctic Engi- neers and Constructors.

Mr. Blankenship also noted this is the first time air cushion tech- nology has been applied to a unit of this weight. Previously, the heaviest air cushion vehicles were 180-ton ferries, which currently ply the English Channel. "This type of transporter is unique, however, because it is not self-propelled, thereby eliminating the most expensive and sophisti- cated portions of conventional air cushion vehicles," said Mr. Blank- enship. He pointed out that it does not require an aircraft-type hull or highly trained personnel for oper- ation and maintenance. In addition, all mechanical equipment on the unit is standard oil field machinery, thoroughly proved in Arctic oper- ation.

The 100-ton capacity unit is an all-steel barge-type hull with a flexible air containment skirt around its perimeter. Mounted on the deck is a large air supply sys- tem incorporating two 85,000-cfm fans. This system forces air under the hull, inflates the skirt and lifts the unit. Because the skirt forms a partial seal with the ground, the vehicle floats on a cushion of air.

The :57-foot by 75-foot hull is 6^-feet Ihigh. W/hen air-lifted, the hull rides about four feet off the ground, allowing it to pass over rocks, ridges and other obstacles.

The skirt of rubber-coated nylon is segmented to flow around ob- stacles so that air pressure will al- ways be maintained. "The transporter is designed for use on relatively level terrain, and land-fast ice areas such as offshore the northern Alaskan coast, the

He said discussions are under way with several prospective cus- tomers for use of the unit begin- ning later this year. The transport- er was fabricated in three sections to facilitate its disassembly, barge shipment on the Mackenzie River to the Arctic, and final reassembly.

The air cushion transporter has many applications, according to its developers, because its large deck can carry a variety of supplies and mount a wide range of drilling and construction equipment. Arctic

Engineers and Constructors sees the unit also serving as a habitat for a crew of 60 men, a construc- tion work platform, or oil field service and maintenance equip- ment carrier. It can move equip- ment and structures while fully as- sembled, eliminating the need for time-consuming assembly and dis- assembly at the site.

Skirt design was provided by Air

Canadian Government support for the program is handled through the Program for the Advancement of Industrial Technology (PAIT) under the Department of Industry,

Sun Oil Company are handled by the company's Dallasjbased Key

The Sun Shipbuilding and Dry

Dock Co. announced a plan to offer $35.6 million United States Govern- ment insured merchant marine bonds for the purpose of paying Sun Ship- building for a part of the purchase price of two 80,000-dwt tankers now being constructed by Sun. The offer- ing, being issued through an under- writing group managed by the First

Boston Corp., consists of two series of bonds of $17.8 million each, with payment of principal and interest in- sured by the Federal Government.

The bonds will be issued by the 652

ANOTHER LASH CONTRACT: The second $80-plus-million contract for three U.S.-flag

LASH ships in a three-week period, and the second contract under the Merchant Marine

Act of 1970, was signed recently in the U.S. Maritime Administration offices in

The ships, designed by Friede & Goldman, Inc., naval architects of New Orleans, La., will be built by Avondale Shipyards at New Orleans for Waterman Steamship Corpora- tion, with delivery between December 1973, and May 1974. The new contract in- creased Avondale Shipyards' total LASH ship orders to 17, all that have been built or ordered in the United States. Principals at the $84-million contract signing shown above are (seated, from left) Edward P. Walsh, Waterman president; A.E. Gibson, Assistant