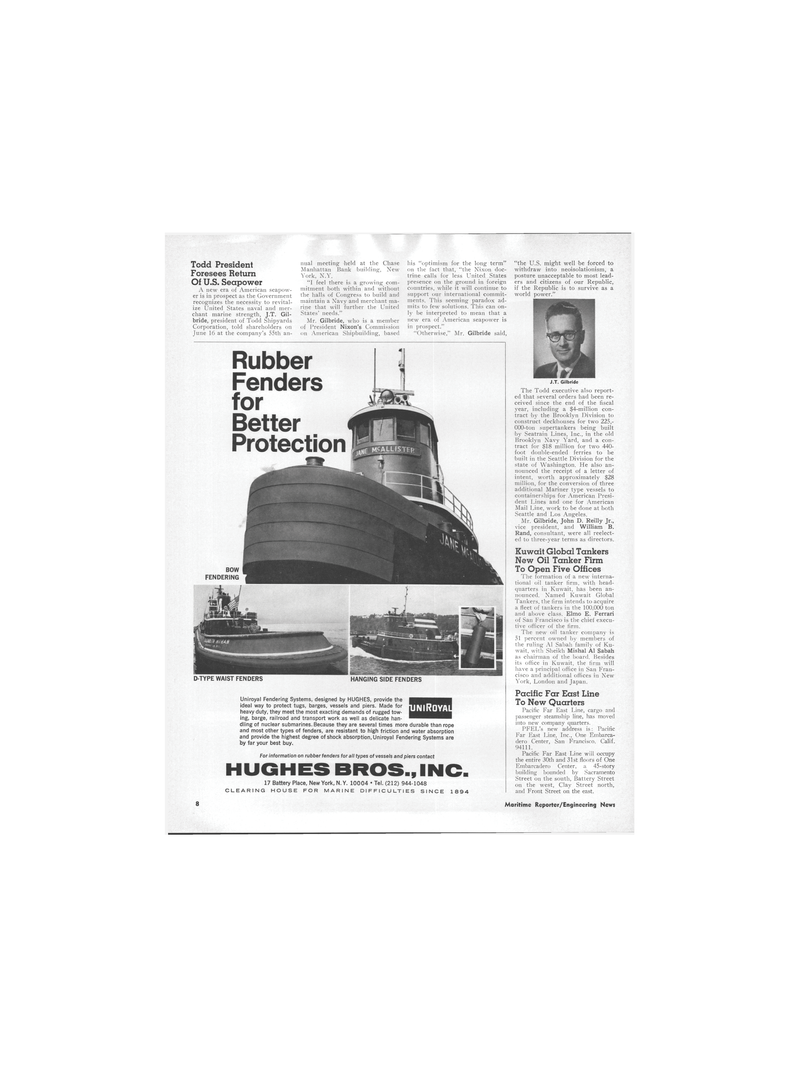 York, N.Y. "I feel there is a growing com- mitment both within and without the halls of Congress to build and maintain a Navy and merchant ma- rine that will further the United

Mr. Gilbride, who is a member of President Nixon's Commission on American Shipbuilding, based his "optimism for the long term" on the fact that, "the Nixon doc- trine calls for less United States presence 011 the ground in foreign countries, while it will continue to support our international commit- ments. This seeming paradox ad- mits to few solutions. This can on- ly be interpreted to mean that a new era of American seapower is in prospect." "Otherwise." Mr. Gilbride said,

Uniroyal Fendering Systems, designed by HUGHES, provide the ideal way to protect tugs, barges, vessels and piers. Made for heavy duty, they meet the most exacting demands of rugged tow- ing, barge, railroad and transport work as well as delicate han- dling of nuclear submarines. Because they are several times more durable than rope and most other types of fenders, are resistant to high friction and water absorption and provide the highest degree of shock absorption, Uniroyal Fendering Systems are by far your best buy.

CLEARING HOUSE FOR MARINE DIFFICULTIES SINCE 1894

IffffMI mm "the U.S. might well be forced to withdraw into neoisolationism, a posture unacceptable to most lead- ers and citizens of our Republic, if the Republic is to survive as a world power."

The Todd executive also report- ed that several orders had been re- ceived since the end of the fiscal year, including a $4-million con- tract by the Brooklyn Division to construct deckhouses for two 225,- 000-ton supertankers being built by Seatrain Lines, Inc., in the old

Brooklyn Navy Yard, and a con- tract for $18 million for two 440- foot double-ended ferries to be built in the Seattle Division for the state of Washington. He also an- nounced the receipt of a letter of intent, worth approximately $28 million, for the conversion of three additional Mariner type vessels to containerships for American Presi- dent Lines and one for American

Mail I Jne, work to be done at both

Rand, consultant, were all reelect- ed to three-year terms as directors.

The formation of a new interna- tional oil tanker firm, with head- quarters in Kuwait, has been an- nounced. Named Kuwait Global

Tankers, the firm intends to acquire a fleet of tankers in the 100,000 ton and above class. Elmo E. Ferrari of San Francisco is the chief execu- tive officer of the firm.

The new oil tanker company is 51 percent owned by members of the ruling A1 Sabali family of Ku- wait, with Sheikh Mishal A1 Sabah as chairman of the board. Besides its office in Kuwait, the firm will have a principal office in San Fran- cisco and additional offices in New