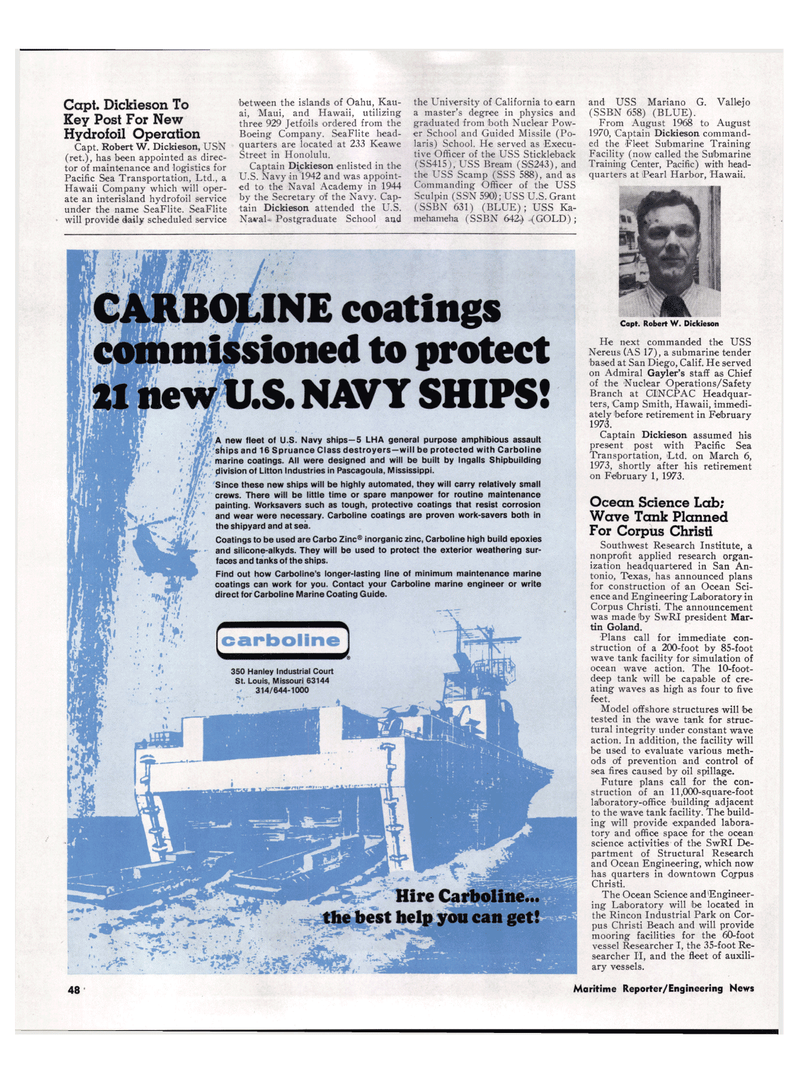 Capt. Robert W. Dickieson, USN (ret.), has been appointed as direc- tor of maintenance and logistics for

Hawaii Company which will oper- ate an interisland hydrofoil service under the name SeaFlite. SeaFlite will provide daily scheduled service between the islands of Oahu, Kau- ai, Maui, and Hawaii, utilizing three 929 Jetfoils ordered from the

Captain Dickieson enlisted in the

U.S. Navy in 1942 and was appoint- ed to the Naval Academy in 1944 by the Secretary of the Navy. Cap- tain Dickieson attended the U.S.

Naval- Postgraduate School and the University of California to earn a master's degree in physics and graduated from both Nuclear Pow- er School and Guided Missile (Po- laris) School. He served as Execu- tive Officer of the USS Stickleback (SS415), USS Bream (SS243), and the USS Scamp (SSS 588), and as

Commanding Officer of the USS

He next commanded the USS

Nereus (AS 17), a submarine tender based at San Diego, Calif. He served on Admiral Gayler's staff as Chief of the Nuclear Operations/Safety

Southwest Research Institute, a nonprofit applied research organ- ization headquartered in San An- tonio, Texas, has announced plans for construction of an Ocean Sci- ence and Engineering Laboratory in

Corpus Christi. The announcement was made by SwRI president Mar- tin Goland.

Plans call for immediate con- struction of a 200-foot by 85-foot wave tank facility for simulation of ocean wave action. The 10-foot- deep tank will be capable of cre- ating waves as high as four to five feet.

Model offshore structures will be tested in the wave tank for struc- tural integrity under constant wave action. In addition, the facility will be used to evaluate various meth- ods of prevention and control of sea fires caused by oil spillage.

Future plans call for the con- struction of an 11,000-square-foot laboratory-office building adjacent to the wave tank facility. The build- ing will provide expanded labora- tory and office space for the ocean science activities of the SwRI De- partment of Structural Research and Ocean Engineering, which now has quarters in downtown Cojpus

The Ocean Science and Engineer- ing Laboratory will be located in the Rincon Industrial Park on Cor- pus Christi Beach and will provide mooring facilities for the 60-foot vessel Researcher I, the 35-foot Re- searcher II, and the fleet of auxili- ary vessels. • t INE coatings sioned to protect •S. NAVY SHIPS!

A new fleet of U.S. Navy ships—5 LHA general purpose amphibious assault ships and 16 Spruance Class destroyers—will be protected with Carboline marine coatings. All were designed and will be built by Ingalls Shipbuilding division of Litton Industries in Pascagoula, Mississippi.

Since these new ships will be highly automated, they will carry relatively small crews. There will be little time or spare manpower for routine maintenance painting. Worksavers such as tough, protective coatings that resist corrosion and wear were necessary. Carboline coatings are proven work-savers both in the shipyard and at sea.

Coatings to be used are Carbo Zinc® inorganic zinc, Carboline high build epoxies and silicone-alkyds. They will be used to protect the exterior weathering sur- faces and tanks of the ships.