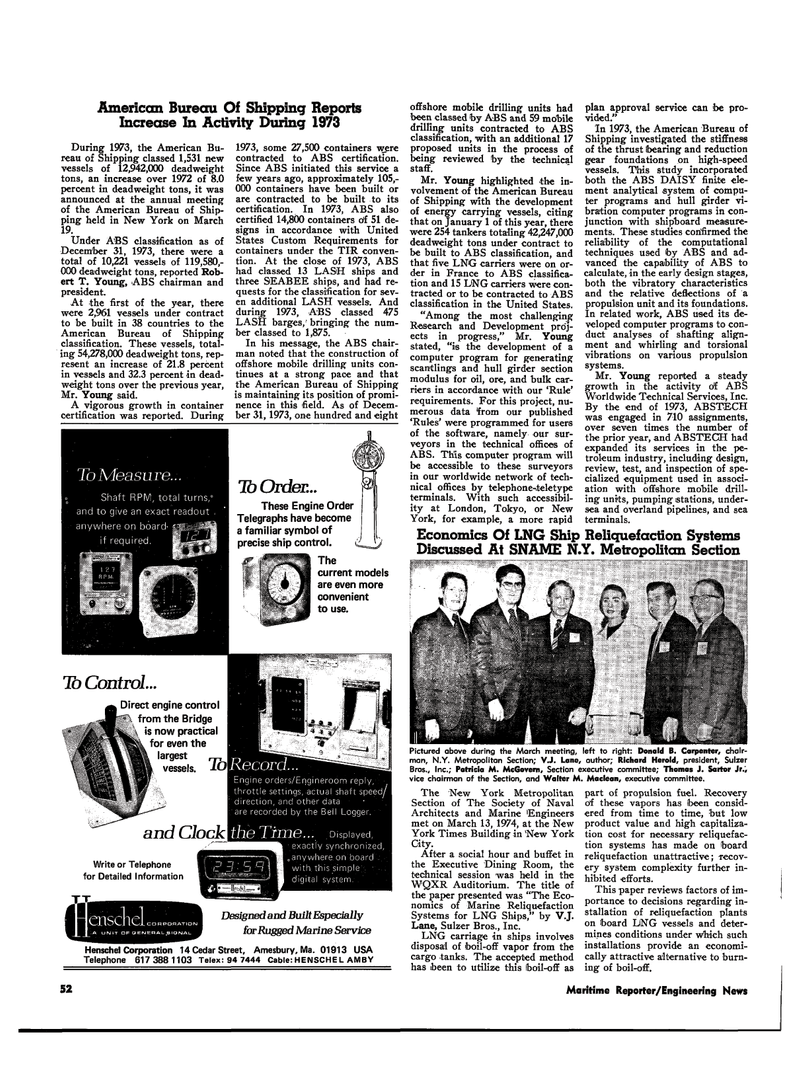 Increase In Activity During 1973

Under A'BS classification as of

At the first of the year, there were 2,961 vessels under contract to be built in 38 countries to the

American Bureau of Shipping classification. These vessels, total- ing 54,278,000 deadweight tons, rep- resent an increase of 21.8 percent in vessels and 32.3 percent in dead- weight tons over the previous year,

A vigorous growth in container certification was reported. During 1973, some 27,500 containers were contracted to ABS certification.

Since ABS initiated this service a few years ago, approximately 105,- 000 containers have been built or are contracted to be built to its certification. In 1973, ABS also certified 14,800 containers of 51 de- signs in accordance with United

States Custom Requirements for containers under the TIR conven- tion. At the close of 1973, ABS had classed 13 LASH ships and three SEABEE ships, and had re- quests for the classification for sev- en additional LASH vessels. And during 1973, ABS classed 475

In his message, the ABS chair- man noted that the construction of offshore mobile drilling units con- tinues at a strong pace and that the American Bureau of Shipping is maintaining its position of promi- nence in this field. As of Decem- ber 31, 1973, one hundred and eight

Shaft RPM, total turns," and to give an exact readout anywhere ori board- • i j

Telegraphs have become a familiar symbol of precise ship control.

The current models are even more convenient to use.

Direct engine control from the Bridge s now practical for even the largest vessels. J-O and Clock

Write or Telephone for Detailed Information

Engine orders/Engineroom reply, throttle settings, actual shaft speed/ direction, and other data are recorded by the Bell Logger. the Time... Displayed, exactly synchronized, 0anywhere on board with this simple . digital system. n sclieL

Research and Development proj- ects in progress," Mr. Young stated, "is the development of a computer program for generating scantlings and hull girder section modulus for oil, ore, and bulk car- riers in accordance with our 'Rule' requirements. For this project, nu- merous data 'from our published 'Rules' were programmed for users of the software, namely our sur- veyors in the technical offices of

ABS. This computer program will be accessible to these surveyors in our worldwide network of tech- nical offices by telephone-teletype terminals. With such accessibil- ity at London, Tokyo, or New

York, for example, a more rapid plan approval service can be pro- vided."

Shipping investigated the stiffness of the thrust bearing and reduction gear foundations on high-speed vessels. This study incorporated both the ABS DAISY finite ele- ment analytical .system of compu- ter programs and hull girder vi- bration computer programs in con- junction with shipboard measure- ments. These studies confirmed the reliability of the computational techniques used by ABS and ad- vanced the capability of ABS to calculate, in the early design stages, both the vibratory characteristics and the relative deflections of a propulsion unit and its fpundations.

Mr. Young reported a steady growth in the activity of ABS

By the end of 1973, ABSTECH was engaged in 710 assignments, over seven times the number of the prior year, and ABSTECH had expanded its services in the pe- troleum industry, including design, review, test, and inspection of spe- cialized equipment used in associ- ation with offshore mobile drill- ing units, pumping istations, under- sea and overland pipelines, and sea terminals.

Section of The Society of Naval

After a social hour and buffet in the Executive Dining Room, the technical session was held in the

WQXR Auditorium. The title of the paper presented was "The Eco- nomics of Marine Reliquefaction

Systems for LNG Ships," by V.J.

LNG carriage in ships involves disposal of boil-off vapor from the cargo tanks. The accepted method has been to utilize this boil-off as part of propulsion fuel. Recovery of these vapors has been consid- ered from time to time, but low product value and high capitaliza- tion cost for necessary reliquefac- tion systems has made on board reliquefaction unattractive; recov- ery system complexity further in- hibited efforts.

This paper reviews factors of im- portance to decisions regarding in- stallation of reliquefaction plants on board DNG vessels and deter- mines conditions under which such installations provide an economi- cally attractive alternative to burn- ing of boil-off. 52 Maritime Reporter/Engineering News