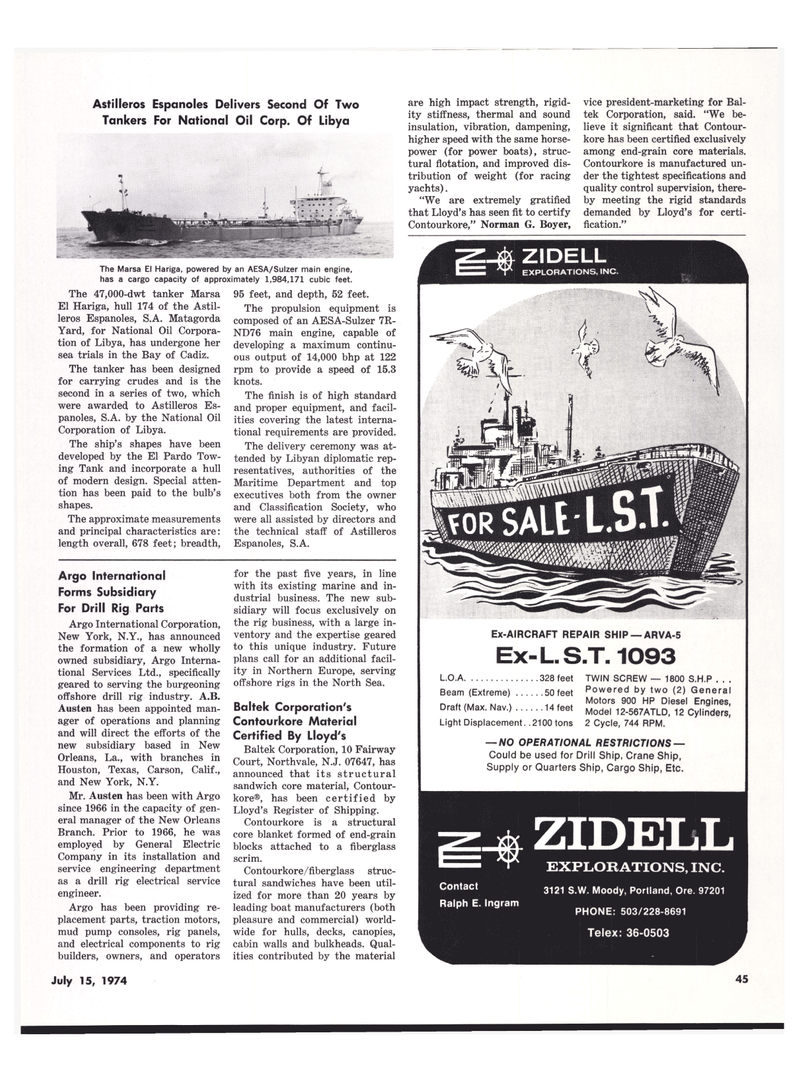 The Marsa El Harlga, powered by an AESA/Sulzer main engine, has a cargo capacity of approximately 1,984,171 cubic feet.

Yard, for National Oil Corpora- tion of Libya, has undergone her sea trials in the Bay of Cadiz.

The tanker has been designed for carrying crudes and is the second in a series of two, which were awarded to Astilleros Es- panoles, S.A. by the National Oil

The ship's shapes have been developed by the El Pardo Tow- ing Tank and incorporate a hull of modern design. Special atten- tion has been paid to the bulb's shapes.

Orleans, La., with branches in

Mr. Austen has been with Argo since 1966 in the capacity of gen- eral manager of the New Orleans

Branch. Prior to 1966, he was employed by General Electric

Contourkore is manufactured un- der the tightest specifications and quality control supervision, there- by meeting the rigid standards demanded by Lloyd's for certi- fication." 95 feet, and depth, 52 feet.

The propulsion equipment is composed of an AESA-Sulzer 7R-

The finish is of high standard and proper equipment, and facil- ities covering the latest interna- tional requirements are provided.

The delivery ceremony was at- tended by Libyan diplomatic rep- resentatives, authorities of the

Maritime Department and top executives both from the owner and Classification Society, who were all assisted by directors and the technical staff of Astilleros

Espanoles, S.A. for the past five years, in line with its existing marine and in- dustrial business. The new sub- sidiary will focus exclusively on the rig business, with a large in- ventory and the expertise geared to this unique industry. Future plans call for an additional facil- ity in Northern Europe, serving offshore rigs in the North Sea.

Court, Northvale, N.J. 07647, has announced that its structural sandwich core material, Contour- kore®, has been certified by

Contourkore is a structural core blanket formed of end-grain blocks attached to a fiberglass scrim.

Contourkore/fiberglass struc- tural sandwiches have been util- ized for more than 20 years by leading boat manufacturers (both pleasure and commercial) world- wide for hulls, decks, canopies, cabin walls and bulkheads. Qual- ities contributed by the material

Could be used for Drill Ship, Crane Ship,