Work will start immediately on the ships, and they will be delivered during the second half of 1979 and the first quarter of 1980.

Speaking about the contract, Sir Lindsay Alexander, chairman of Ocean, said: "We are very pleased to be placing orders in the U.K., and so playing our part in supporting a viable British shipbuilding industry.

"The placing of this contract renews a very long association between Scott Lithgow and Ocean.

This stretches back more than 100 years to the building, by Scott, of Ocean's first three ships, Agamemnon, Ajax, and Achilles." Delighted at having secured the contract, Ross Belch, the managing director of Scott Lithgow Limited, said: "Shipbuilding throughout the world is going through a very difficult time at present. It is therefore gratifying that very important British owners like Ocean have found it possible to place such a valuable order with us. It is vitally important for the Lower Clyde, since it will provide the equivalent of one year's employment for the whole of the yards and engine works in Greenock." The new ships will be about 20,000-dwt twin-hatch, multipurpose cargo liners, and are designed for worldwide trading.

They will have a service speed of 18 knots and be capable of operating as conventional breakbulk/ palletized cargo ships, or as geared containerships carrying more than 750 containers, or as bulkers for cargoes such as grain or ore. They will be able to use ports which are not equipped with specialized container cranes.

Accommodation for 36 officers, crew and cadets, together with the main engine machinery, is located aft, and propulsion will be a Sulzer 7RND76M diesel engine built under license by Scott.

The ships will probably be operated in the Group's West African trades by Elder Dempster Lines. 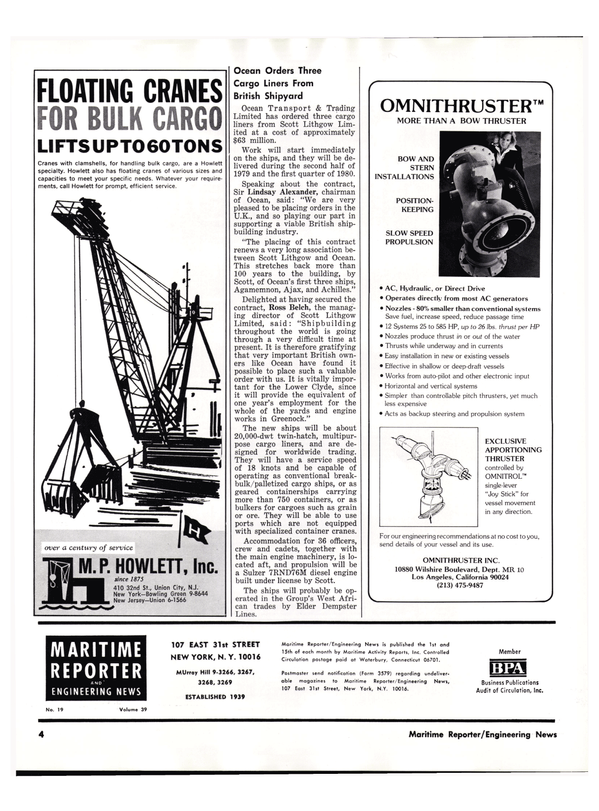