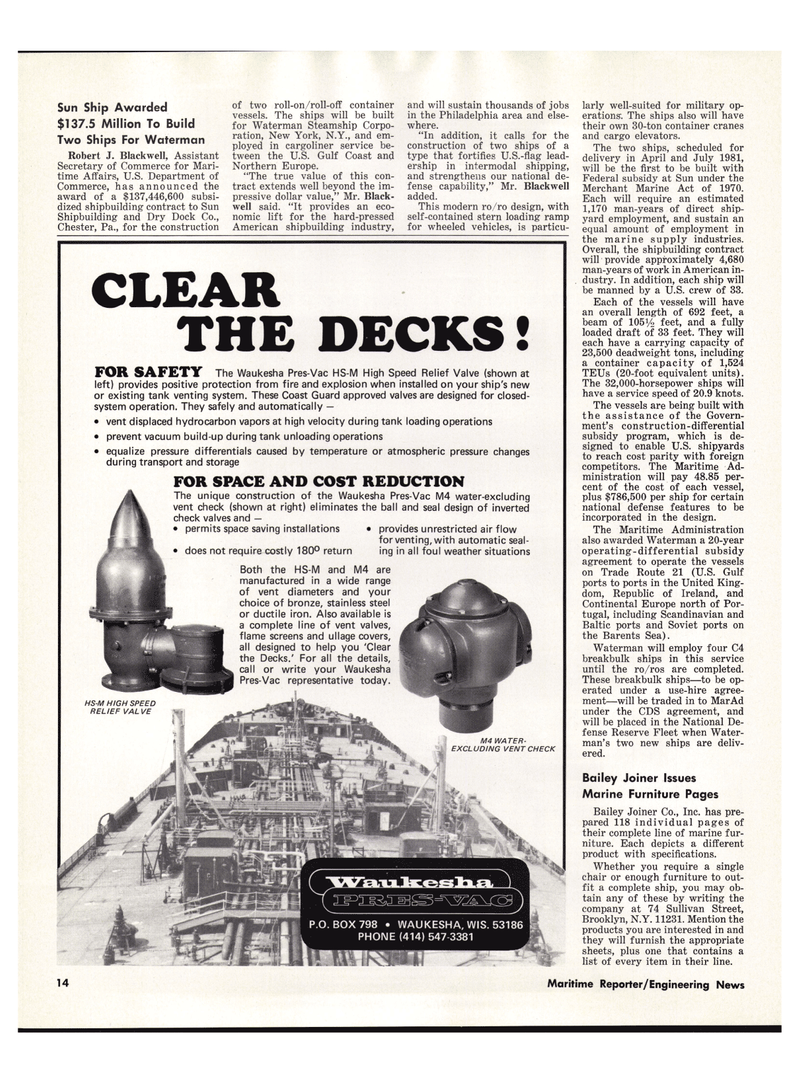 Secretary of Commerce for Mari- time Affairs, U.S. Department of

Commerce, has announced the award of a $137,446,600 subsi- dized shipbuilding contract to Sun

Chester, Pa., for the construction of two roll-on/roll-off container vessels. The ships will be built for Waterman Steamship Corpo- ration, New York, N.Y., and em- ployed in cargoliner service be- tween the U.S. Gulf Coast and

Northern Europe. "The true value of this con- tract extends well beyond the im- pressive dollar value," Mr. Black- well said. "It provides an eco- nomic lift for the hard-pressed

American shipbuilding industry, and will sustain thousands of jobs in the Philadelphia area and else- where. "In addition, it calls for the construction of two ships of a type that fortifies U.S.-flag lead- ership in intermodal shipping, and strengthens our national de- fense capability," Mr. Blackwell added.

FOR SPACE AND COST REDUCTION

Both the HS-M and M4 are manufactured in a wide range of vent diameters and your choice of bronze, stainless steel or ductile iron. Also available is a complete line of vent valves, flame screens and ullage covers, all designed to help you 'Clear the Decks.' For all the details, call or write your Waukesha

EXCLUDING VENT CHECK larly well-suited for military op- erations". The ships also will have their own 30-ton container cranes and cargo elevators.

The two ships, scheduled for delivery in April and July 1981, will be the first to be built with

Federal subsidy at Sun under the

Each will require an estimated 1,170 man-years of direct ship- yard employment, and sustain an equal amount of employment in the marine supply industries.

Overall, the shipbuilding contract will provide approximately 4,680 man-years of work in American in- dustry. In addition, each ship will be manned by a U.S. crew of 33.

Each of the vessels will have an overall length of 692 feet, a beam of 105% feet, and a fully loaded draft of 33 feet. They will each have a carrying capacity of 23,500 deadweight tons, including a container capacity of 1,524

The vessels are being built with the assistance of the Govern- ment's construction-differential subsidy program, which is de- signed to enable U.S. shipyards to reach cost parity with foreign competitors. The Maritime Ad- ministration will pay 48.85 per- cent of the cost of each vessel, plus $786,500 per ship for certain national defense features to be incorporated in the design.

The Maritime Administration also awarded Waterman a 20-year operating-differential subsidy agreement to operate the vessels on Trade Route 21 (U.S. Gulf ports to ports in the United King- dom, Republic of Ireland, and

Continental Europe north of Por- tugal, including Scandinavian and

Baltic ports and Soviet ports on the Barents Sea).

Waterman will employ four C4 breakbulk ships in this service until the ro/ros are completed.

These breakbulk ships—to be op- erated under a use-hire agree- ment—will be traded in to MarAd under the CDS agreement, and will be placed in the National De- fense Reserve Fleet when Water- man's two new ships are deliv- ered.

Whether you require a single chair or enough furniture to out- fit a complete ship, you may ob- tain any of these by writing the company at 74 Sullivan Street,

Brooklyn, N.Y. 11231. Mention the products you are interested in and they will furnish the appropriate sheets, plus one that contains a list of every item in their line. reason to put our equipment to work for you. iiGnng<.niinoii6os2sUA».