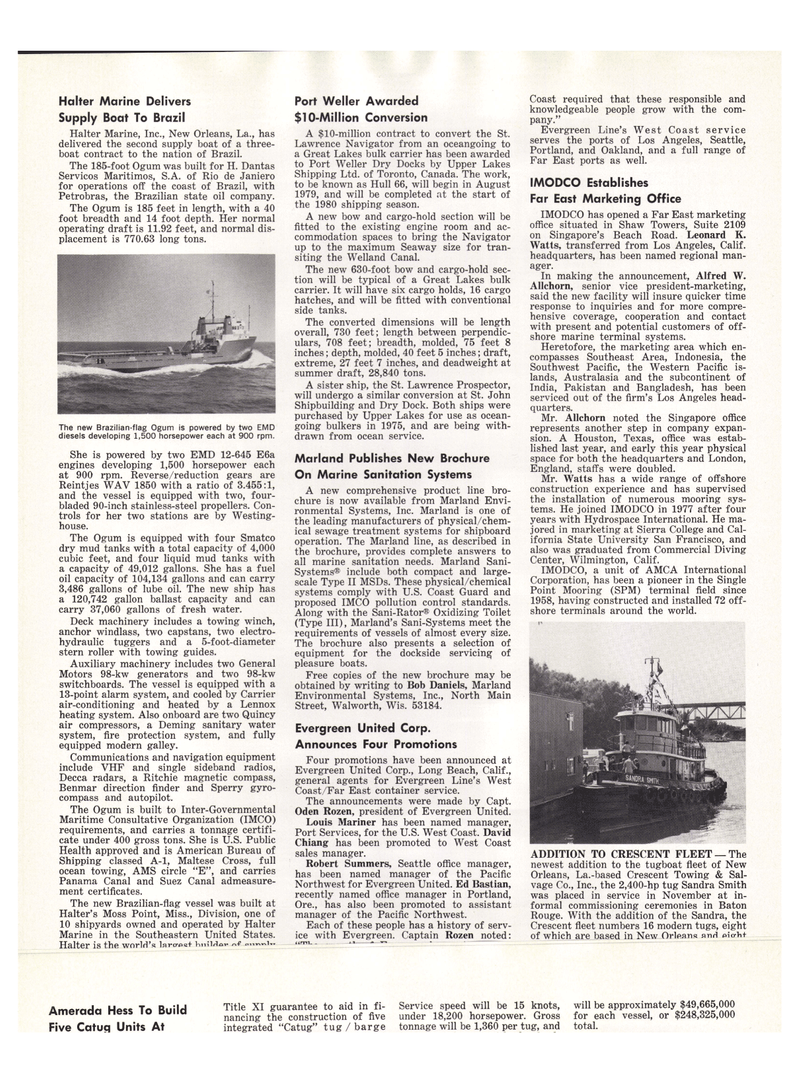 Halter Marine, Inc., New Orleans, La., has delivered the second supply boat of a three- boat contract to the nation of Brazil.

The 185-foot Ogum was built for H. Dantas

Servicos Maritimos, S.A. of Rio de Janiero for operations off the coast of Brazil, with

The new Brazilian-flag Ogum is powered by two EMD diesels developing 1,500 horsepower each at 900 rpm.

She is powered by two EMD 12-645 E6a engines developing 1,500 horsepower each at 900 rpm. Reverse/reduction gears are

Reintjes WAV 1850 with a ratio of 3.455:1, and the vessel is equipped with two, four- bladed 90-inch stainless-steel propellers. Con- trols for her two stations are by Westing- house.

Communications and navigation equipment include VHF and single sideband radios,

The Ogum is built to Inter-Governmental

Health approved and is American Bureau of

The new Brazilian-flag vessel was built at

Halter's Moss Point, Miss., Division, one of 10 shipyards owned and operated by Halter

Marine in the Southeastern United States.

A $10-million contract to convert the St.

Shipping Ltd. of Toronto, Canada. The work, to be known as Hull 66, will begin in August 1979, and will be completed at the start of the 1980 shipping season.

A new bow and cargo-hold section will be fitted to the existing engine room and ac- commodation spaces to bring the Navigator up to the maximum Seaway size for tran- siting the Welland Canal.

The new 630-foot bow and cargo-hold sec- tion will be typical of a Great Lakes bulk carrier. It will have six cargo holds, 16 cargo hatches, and will be fitted with conventional side tanks.

A sister ship, the St. Lawrence Prospector, will undergo a similar conversion at St. John

Shipbuilding and Dry Dock. Both ships were purchased by Upper Lakes for use as ocean- going bulkers in 1975, and are being with- drawn from ocean service.

A new comprehensive product line bro- chure is now available from Marland Envi- ronmental Systems, Inc. Marland is one of the leading manufacturers of physical/chem- ical sewage treatment systems for shipboard operation. The Marland line, as described in the brochure, provides complete answers to all marine sanitation needs. Marland Sani-

Along with the Sani-Rator® Oxidizing Toilet (Type III), Marland's Sani-Systems meet the requirements of vessels of almost every size.

The brochure also presents a selection of equipment for the dockside servicing of pleasure boats.

Free copies of the new brochure may be obtained by writing to Bob Daniels, Marland

Four promotions have been announced at

The announcements were made by Capt.

Louis Mariner has been named manager,

Chiang has been promoted to West Coast sales manager.

Robert Summers, Seattle office manager, has been named manager of the Pacific

Ore., has also been promoted to assistant manager of the Pacific Northwest.

Each of these people has a history of serv- ice with Evergreen. Captain Rozen noted: timi. - — —J

Coast required that these responsible and knowledgeable people grow with the com- pany."

Portland, and Oakland, and a full range of

In making the announcement, Alfred W.

Southwest Pacific, the Western Pacific is- lands, Australasia and the subcontinent of

India, Pakistan and Bangladesh, has been serviced out of the firm's Los Angeles head- quarters.

Mr. Allchorn noted the Singapore office represents another step in company expan- sion. A Houston, Texas, office was estab- lished last year, and early this year physical space for both the headquarters and London,

Mr. Watts has a wide range of offshore construction experience and has supervised the installation of numerous mooring sys- tems. He joined IMODCO in 1977 after four years with Hydrospace International. He ma- jored in marketing at Sierra College and Cal- ifornia State University San Francisco, and also was graduated from Commercial Diving

IMODCO, a unit of AMCA International

Corporation, has been a pioneer in the Single

Point Mooring (SPM) terminal field since 1958, having constructed and installed 72 off- shore terminals around the world. t>

Rouge. With the addition of the Sandra, the

Crescent fleet numbers 16 modern tugs, eight of which are based in New Orleans arid oio-inf