San Marcos Carrier Inc., Oakland, Calif., an affiliated company of the Oakland-based Domtar Gypsum America Inc., has announced that it has purchased the M/V Cabo San Lucas which, when converted, will be one of the world's largest oceangoing, self-unloading gypsum ore carriers.

The ship is a modern gearless bulk cargo vessel having 33,851 long tons total deadweight and a deep draft of 36.87 feet. She has seven cargo holds, an extreme breadth of 84 feet, 596 feet in length overall, a cargo capacity of over 30,000 tons of gypsum rock, a self-discharging capacity of over 2,000 tons per hour, and will have a speed of 15.5 knots.

During conversion, expected to be completed during 1980 in Japan, the vessel will be equipped with a totally enclosed self-discharging conveyor system. The Cabo San Lucas will enter service, supplementing other ships o p e r a t e d by affiliated Domtar Gypsum America Inc. shipping companies in transporting highpurity gypsum ore from San Mar- cos, Mexico to Domtar's gypsum wallboard manufacturing plants at Long Beach and Antioch, Calif., and Tacoma, Wash., as well as to other gypsum and cement manufacturers on the West Coast, the Vancouver, British Columbia area, and the Pacific Far East.

According to Robert V. Hale, president of San Marcos Carrier Inc., the Cabo San Lucas is strengthened for carrying heavy cargoes, and will be capable of transporting a wide range of bulk commodities in addition to gypsum ore. 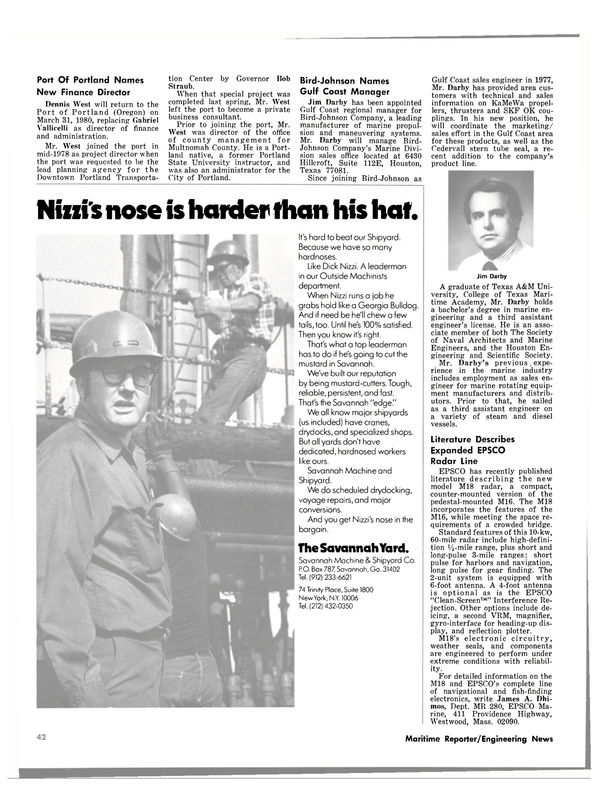