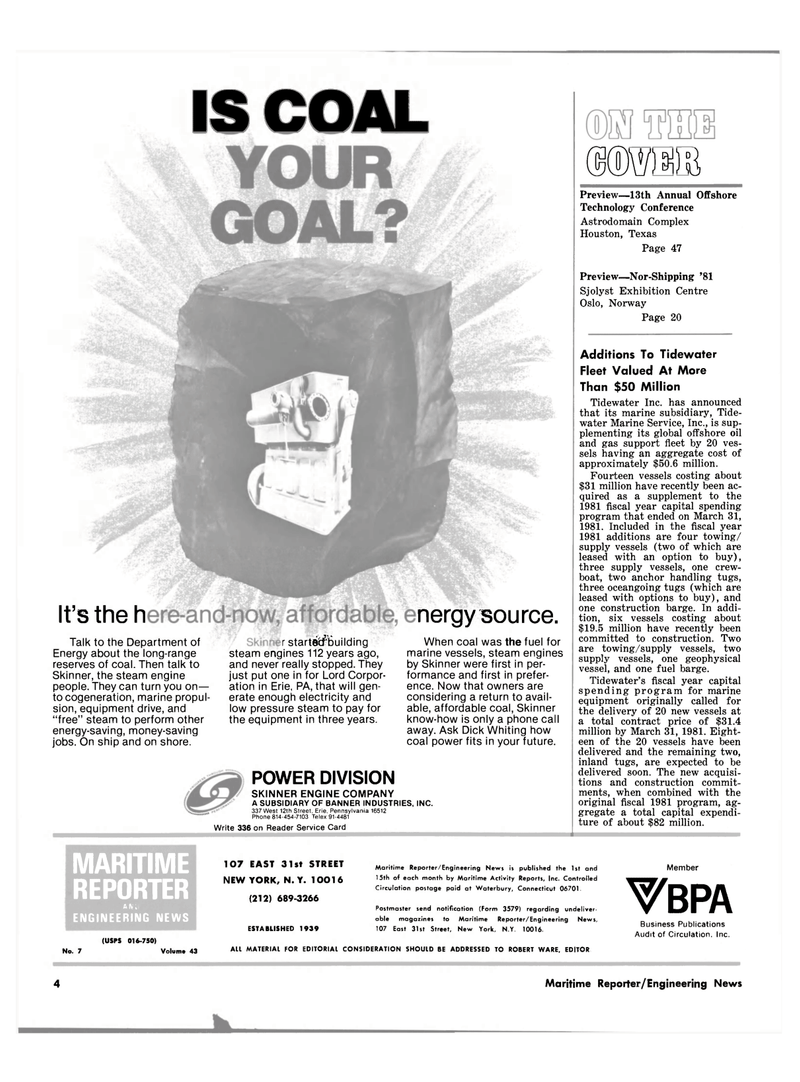 Talk to the Department of

Energy about the long-range reserves of coal. Then talk to

Skinner, the steam engine people. They can turn you on— to cogeneration, marine propul- sion, equipment drive, and "free" steam to perform other energy-saving, money-saving jobs. On ship and on shore. * Jv* r started building steam engines 112 years ago, and never really stopped. They just put one in for Lord Corpor- ation in Erie, PA, that will gen- erate enough electricity and low pressure steam to pay for the equipment in three years. nergy source.

When coal was the fuel for marine vessels, steam engines by Skinner were first in per- formance and first in prefer- ence. Now that owners are considering a return to avail- able, affordable coal, Skinner know-how is only a phone call away. Ask Dick Whiting how coal power fits in your future.

Fourteen vessels costing about $31 million have recently been ac- quired as a supplement to the 1981 fiscal year capital spending program that ended on March 31, 1981. Included in the fiscal year 1981 additions are four towing/ supply vessels (two of which are leased with an option to buy), three supply vessels, one crew- boat, two anchor handling tugs, three oceangoing tugs (which are leased with options to buy), and one construction barge. In addi- tion, six vessels costing about $19.5 million have recently been committed to construction. Two are towing/supply vessels, two supply vessels, one geophysical vessel, and one fuel barge.

Tidewater's fiscal year capital spending program for marine equipment originally called for the delivery of 20 new vessels at a total contract price of $31.4 million by March 31, 1981. Eight- een of the 20 vessels have been delivered and the remaining two, inland tugs, are expected to be delivered soon. The new acquisi- tions and construction commit- ments, when combined with the original fiscal 1981 program, ag- gregate a total capital expendi- ture of about $82 million.

Maritime Reporter/Engineering News is published the 1st and 15th of each month by Maritime Activity Reports, Inc. Controlled

ALL MATERIAL FOR EDITORIAL CONSIDERATION SHOULD BE ADDRESSED TO ROBERT WARE, EDITOR