Miss April Dawn Chauff, daughter of Mr. and Mrs. Lowell G. Chauff, served as flower girl, a role traditionally filled by the daughter of an Avondale Shipyard's employee. Miss Chauff's father is an electrician specialist at the main plant.

The new ship will cost approximately $70 million and is the first conventional chemical ship to be built in the United States in over a decade.

Through Diamond Shamrock's Houston-based Ocean Systems Department, the Ogden Dynachem and a sister vessel will subcharter tank space to transport products for other companies as well. The Ogden Dynachem more than doubles Diamond Shamrock Ocean System's combined vessel capacity to over 97,000 deadweight tons and more than doubles cargo capacity to over 1.3 million tons yearly.

Construction of the Ogden Dynachem began in June 1980 at Avondale, which is a subsidiary of the Ogden Corporation.

In addition to a broad range of chemicals, the 629-foot vessel's 18 cargo tanks in 12 segregations allow the Ogden Dynachem to also transport crude oil, refined petroleum products and vegetable and animal oils. The Ogden Dynachem's multiproduct cargo system and ship configuration were designed for transportation of 50 percent solution caustic soda, Grade A petroleum products and Type II and III chemicals having specific gravities up to 1.62.

The tanker will be among the safest at sea, fitted with many advanced design features and built to meet or exceed the latest USCG and IMCO requirements for bulk carriers of hazardous materials.

In his review of a paper detailing the Ogden Dynachem's design presented to The Society of Naval Architects and Marine Engineers bv the ship's naval architects, USCG Comdr. D.F. Bobeck said: "To say that the vessel's design is unique and worthy of special consideration is surely an understatement.

To design a vessel to meet only the owner's requirements would test the mettle of most naval architects and marine engineers.

To design a vessel to also incorporate many novel features and meet the new regulations promulgated by the Coast Guard is indeed a noteworthy achievement." Commander Bobeck also noted the Ogden Dynachem includes design features not presently required by the Coast Guard but likely to be instituted in the future.

Accommodations for a complement of 36 are provided in the single tower, which also includes lounges, a gymnasium, conference room, ship's office, dining room and other facilities. Each of the regular 24 crew members is housed in an individual stateroom having private toilet and shower. 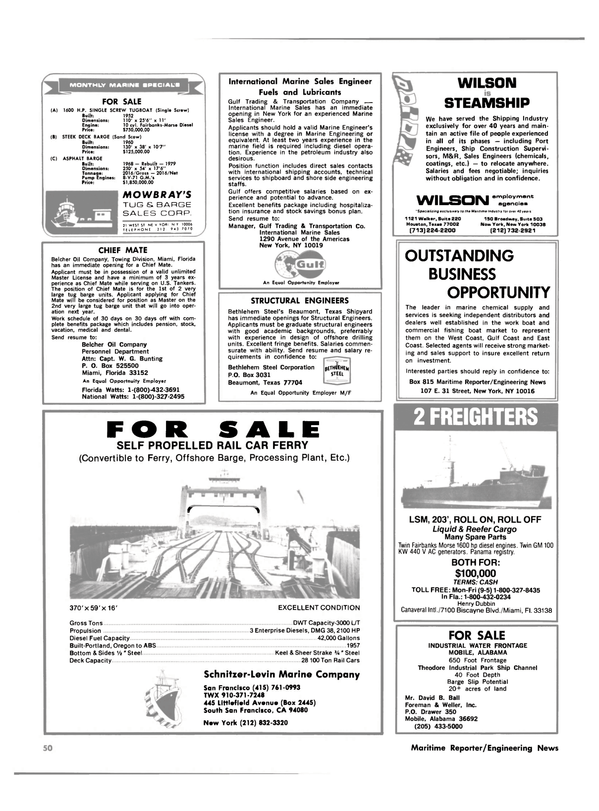